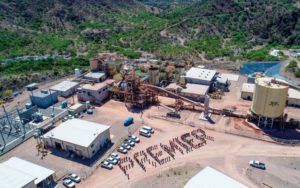 Premier Gold Mines Ltd. [PG-TSX; PIRGF-OTC] on Monday March 26 reported a year-end reserve and resource update for its 100%-owned Mercedes Mine in Mexico. The announcement follows an extensive drilling campaign that has effectively replaced reserves that were depleted from mining operations.

Premier Gold mines is a gold producer and exploration and development company with multiple gold projects in a number of established mining districts. They include Ontario, Nevada and Mexico.

The Mercedes Mine, located in Sonora state, is a 2,000 tonne-per-day underground gold-silver mine. It is situated 250 km northeast of Hermosillo and 300 km south of Tuscon, Arizona.

Power supply to the mine is provided by a 65-km, 115 kilowatt power line from the town of Magdalena, Kino.

Several exploration targets exist on the project that the company has identified to extend the mine life. The focus of current exploration is to identify potential targets that are close to existing infrastructure on the property.

Premier Gold is currently focused on developing underground infrastructure for definition drilling at the high-grade Marianas Zone in order to bring this area into the current mine plan.

The announcement prompted Scotiabank analyst Ovais Habib to note that Premier appears to be meeting success in replenishing reserves with the potential for incremental mine life additions at Mercedes.

In 2017, Premier drilled 46,000 metres at Mercedes across 349 holes to test for potential extensions of the known vein system and also new mineralized horizons.

New potential vein trends on the property beneath post-mineral cover that had not previously been tested.

In addition to the extensive exploration program, the focus since the mine was acquired in October, 2016 has been, and continues to be cost reduction and increasing efficiencies and through-put. In keeping with that plan, the company has replaced a portion of the mobile fleet in order to reduce dilution and cut the number of contracting firms employed.