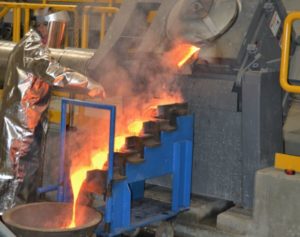 The Brucejack Mine is a 2,700 tonnes-per-day high grade underground mine located approximately 65 km north of Stewart. A year-round all-weather road connects the mine to Highway 37. Production commenced in the summer of 2017.

As well as the first quarter production results, the company released an operations update as ramp up advances at the mine.

Pretium said the Brucejack Mine is on track to achieve first half 2018 guidance of between 150,000 and 200,000 ounces of gold at an all-in sustaining cash cost of US$900-700/oz. Guidance for the second half of this year is expected to be announced by mid-year.

Gold production improved steadily through the first quarter, with 32,910 ounces produced in March,” said Pretium CEO Joseph Ovsenek. “This result is attributed to the successful implementation of a number of operational improvements and initiatives,” he said.

He said the grade control program has now been fully integrated into the mining process and the rate of underground development has increased to provide for additional stopes in the mine’s inventory.

Ovsenek said the company is focused on continuing to increase grade to the mill in the second quarter.

“We are building on our healthy cash position, and expect to achieve steady-state production by mid-to-late 2018,” he said.

Pretium said the grade control program is a data-driven and iterative process that is being used to optimize stope shapes, resulting in reduced dilution and optimized grade to the mill. The program comprises drilling, sampling, and local modelling with improved short-term grade prediction.

It is now being implemented for stope optimization in areas of near-term production. The model is informed by tightly-spaced infill drilling (with areas drilled at 7.5 metres or better) and has a resolution of approximately 2.5 metres.

The absence of operational grade control and limited stope optionality contributed to low gold production for the month of January, the company said. Gold production subsequently increased significantly in February with stopes planned for the fourth quarter of 2017 and other high-grade stopes coming online.