Probe Metals Inc. (TSX-V: PRB) (OTCQB: PROBF) (“Probe” or the “Company”) is pleased to provide the third set of results from the 2021 drill program on its 100%-owned Val-d’Or East Monique property (the “Property”) located near Val-d’Or, Quebec. Results from seven (7) holes totalling 2,843 metres from the 45,000-metre ongoing drilling program revealed significant, new high-grade mineralized intersections along strike and at depth in the A, B, I and M gold zones southeast of the former Monique open pit mine (see figure 1). This year’s drill program on the Monique property is focussed on resource expansion as well as resource conversion. Results from over 70 drill holes are pending. Selected highlights from the current drill results are presented below.

David Palmer, President and CEO of Probe, states, “Since its discovery in 2019, the M zone has quickly expanded into one of the key mineralized systems on the property. Today’s results demonstrate the incredible exploration potential that exists on the Val-d’Or East Project, with the M Zone returning one of the highest-grade intercepts to date beyond the boundary of the current resource. These kinds of results will definitely help build ounces in the next resource update and advance the project towards development, potentially increasing the production profile, pit sizes, and mine life.  We are currently planning an extensive exploration program for 2022, which will represent the largest program to date for Val-d’Or East.”

Expansion drilling holes MO-21-123 to 127 were designed to test the extension of the A, B, I and M zones laterally and from surface to 350 metres depth. The upper part of hole MO-21-122 tested the continuity of the A and B zones while the lower part explored the extension of the I and M zones, at shallow (open pit) depths. Infill hole MO-21-121 was designed to test the eastern extension of the J and G zones inside the conceptual pits between surface to 100 metres depth. All the expansion drilling holes released today returned significant new gold intercepts, which are all open along strike and at depth. Based on the new results, additional expansion and infill drilling has been planned to test the continuity of these zones. We are currently planning a 125,000-metre drill program at Val-d’Or East for next year. The program will focus on the conversion of inferred resource into indicated category, while still targeting significant expansion. Two drills are now active on infill drilling at the Monique eastern A, B, E, I and M zones area while a third drill is turning on the Courvan trend area.

All results released today will be included in an updated resource for the Val-d’Or East project, which will form the basis of the prefeasibility study (PFS) expected to be completed in 2023. The PFS is an important step in advancing the project to production and work will run concurrently with environmental studies and permitting.

Selected drill results from holes MO-21-121 to 127 at the Monique Area drilling program are, as follows: 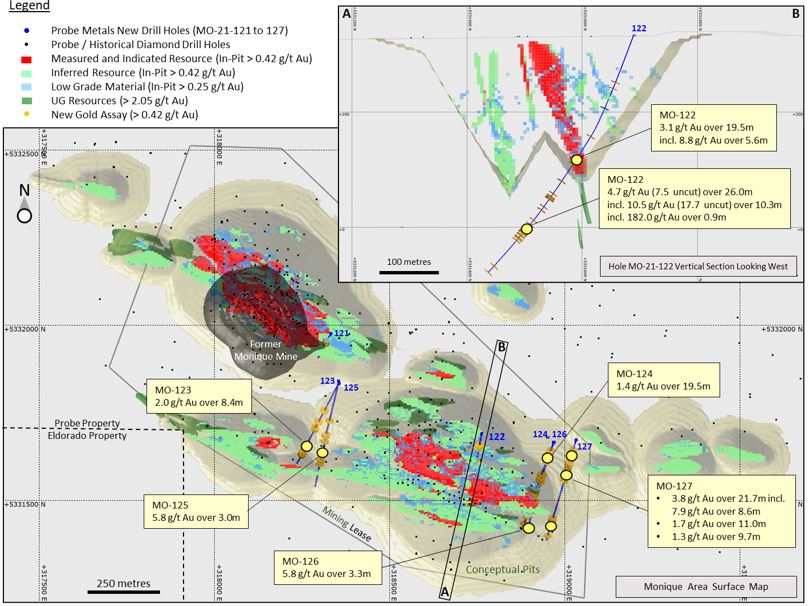 About the Monique Property:

Gold mineralization on the Monique property is mainly associated with three deformation zones that cross the property with an orientation of 280° and a 75°- 80° dip to the north. Gold mineralization is defined by a network of quartz/tourmaline/carbonate veins and veinlets with disseminated sulphides in the altered wall rocks. A total of 16 gold zones have been discovered on the property, to-date. Some mineralized zones have been defined from surface to a depth of 575 metres and vary in width from 1 metre to up to 60 metres. Mineralized structures extend laterally up to 900 metres.

The Monique open pit mine began commercial production in 2013 and ceased production at the end of January 2015. A total of 0.58 Mt of mineralized material was extracted at a grade of 2.53 g/t Au, from the surface to 100 metres depth for a total of 45,694 ounces of gold.

The scientific and technical content of this press release has been reviewed, prepared and approved by Mr. Marco Gagnon, P.Geo, who is a “Qualified Person” within the meaning of NI 43-101, and Executive Vice-President and a director of Probe.

During the last drilling program, assay samples were taken from the NQ core by sawing the drill core in half, with one-half sent to a certified commercial laboratory and the other half retained for future reference. A strict QA/QC program was applied to all samples, which includes insertion of mineralized standards and blank samples for each batch of 20 samples. The gold analyses were completed by fire-assays with an atomic absorption finish on 50 grams of materials. Repeats were carried out by fire-assay followed by gravimetric testing on each sample containing 3.0 g/t gold or more. Total gold analyses (Metallic Sieve) were carried out on the samples which presented a great variation of their gold contents or the presence of visible gold.

Probe Metals Inc. is a leading Canadian gold exploration company focused on the acquisition, exploration and development of highly prospective gold properties. The Company is committed to discovering and developing high-quality gold projects, including its key asset the multimillion-ounce Val-d’Or East Gold Project, Québec. The Company is well-funded and controls a strategic land package of approximately 1,000-square-kilometres of exploration ground within some of the most prolific gold belts in Québec. The Company was formed as a result of the $526M sale of Probe Mines Limited to Goldcorp. Eldorado Gold Corporation currently owns approximately 11.5% of the Company.

On behalf of Probe Metals Inc.,

Neither TSX Venture Exchange nor its Regulation Services Provider (as that term is defined in the policies of the TSX Venture Exchange) accepts responsibility for the adequacy or accuracy of this release. This News Release includes certain “forward-looking statements” which are not comprised of historical facts. Forward-looking statements include estimates and statements that describe the Company’s future plans, objectives or goals, including words to the effect that the Company or management expects a stated condition or result to occur. Forward-looking statements may be identified by such terms as “believes”, “anticipates”, “expects”, “estimates”, “may”, “could”, “would”, “will”, or “plan” and include, but are not limited to, statements with respect to: the results of the PEA, including future Project opportunities, future operating and capital costs, closure costs,  AISC, the projected NPV, IRR, timelines, permit timelines, and the ability to obtain the requisite permits, economics and associated returns of the Project, the technical viability of the Project, the market and future price of and demand for gold, the environmental impact of the Project, and the ongoing ability to work cooperatively with stakeholders, including the local levels of government. Since forward-looking statements are based on assumptions and address future events and conditions, by their very nature they involve inherent risks and uncertainties. Although these statements are based on information currently available to the Company, the Company provides no assurance that actual results will meet management’s expectations. Risks, uncertainties and other factors involved with forward-looking information could cause actual events, results, performance, prospects and opportunities to differ materially from those expressed or implied by such forward-looking information. Forward looking information in this news release includes, but is not limited to, the Company’s objectives, goals or future plans, statements, exploration results, potential mineralization, the estimation of mineral resources, exploration and mine development plans, timing of the commencement of operations and estimates of market conditions. Factors that could cause actual results to differ materially from such forward-looking information include, but are not limited to failure to identify mineral resources, failure to convert estimated mineral resources to reserves, the inability to complete a feasibility study which recommends a production decision, the preliminary nature of metallurgical test results, delays in obtaining or failures to obtain required governmental, environmental or other project approvals, political risks, inability to fulfill the duty to accommodate First Nations and other indigenous peoples, uncertainties relating to the availability and costs of financing needed in the future, changes in equity markets, inflation, changes in exchange rates, fluctuations in commodity prices, delays in the development of projects, capital and operating costs varying significantly from estimates and the other risks involved in the mineral exploration and development industry, and those risks set out in the Company’s public documents filed on SEDAR. Although the Company believes that the assumptions and factors used in preparing the forward-looking information in this news release are reasonable, undue reliance should not be placed on such information, which only applies as of the date of this news release, and no assurance can be given that such events will occur in the disclosed time frames or at all. The Company disclaims any intention or obligation to update or revise any forward-looking information, whether as a result of new information, future events or otherwise, other than as required by law.