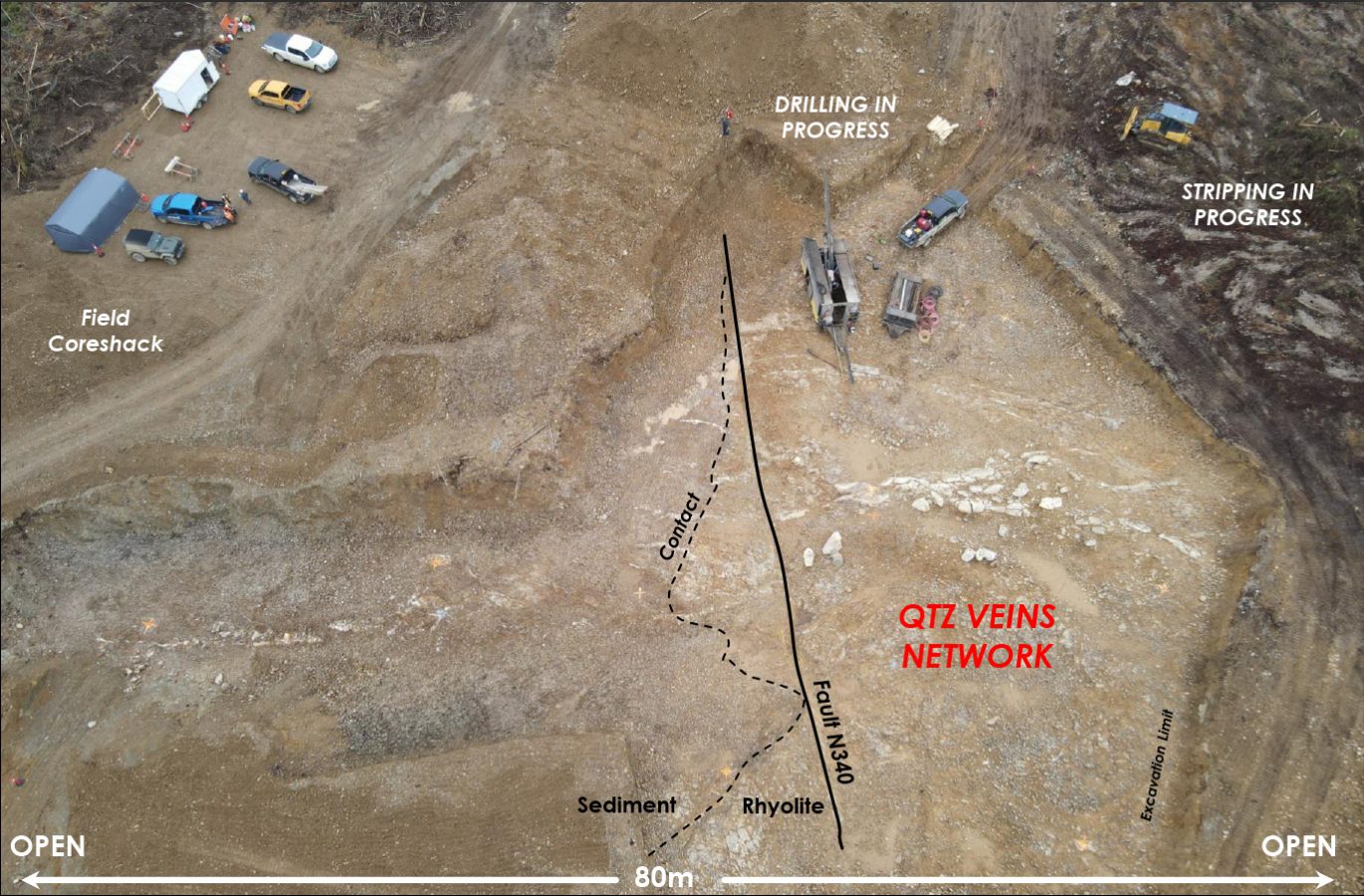 To date, four (4) holes, totalling 524.5 meters, drilled along within the same section N155 and collared over the high-grade gold mineralization at the LYNX Gold Zone, are completed. Few specks of Visible Gold (VG) where encountered in the first two (2) holes (WB21-01 and WB21-02) that are currently logged and splited adequatly. All holes were collared in a strong altered and brecciated rhyolite and/or altered sediments. Abundant quartz veins and large network of quartz veinlets were also observed showing pervasive sericite alteration with disseminated sulphides (galena, chalocopyrite, pyrite, sphalerite, stibinite and malachite) over more than 50 meters in each hole. 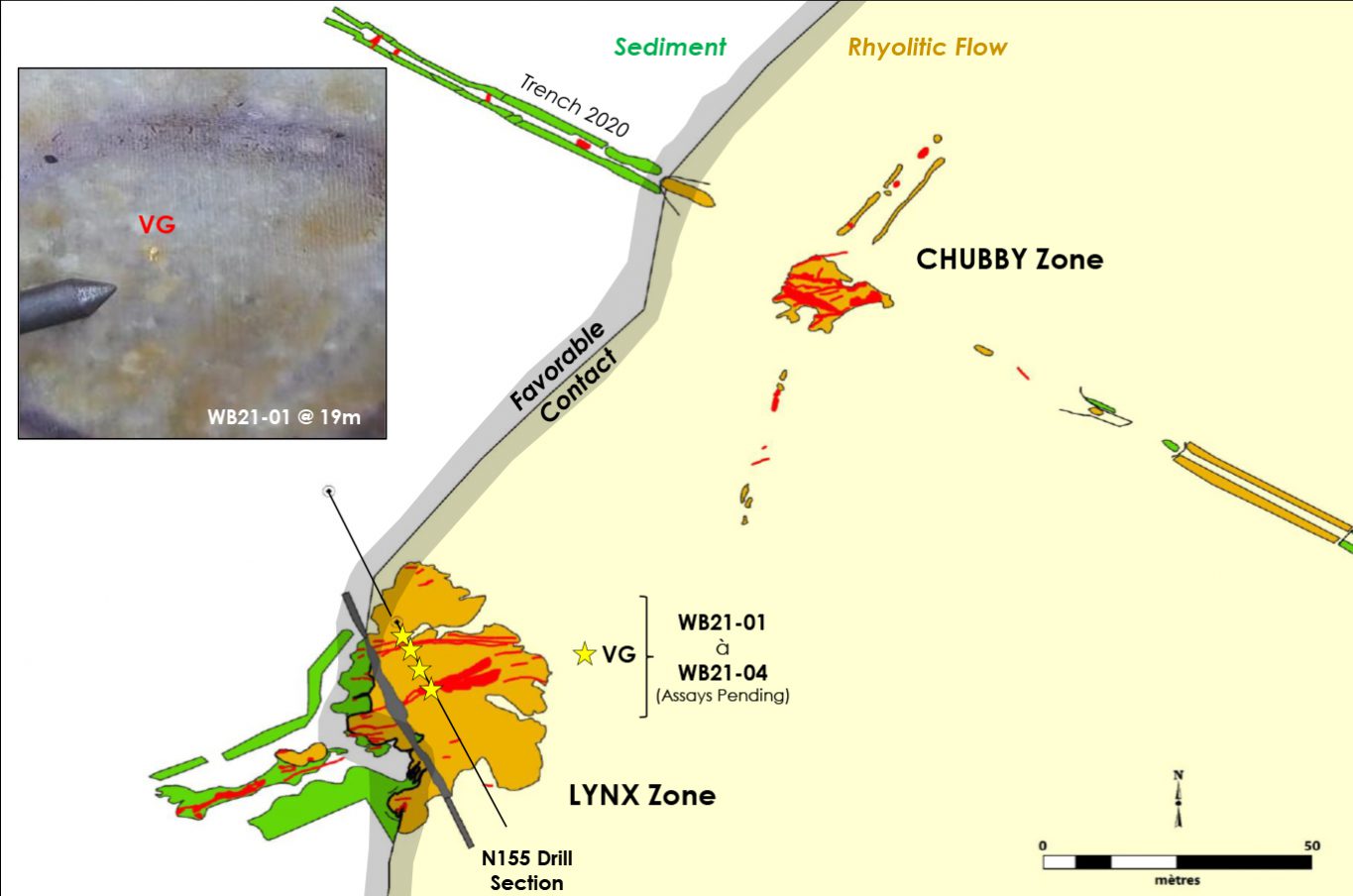 Puma notes that the logging and sampling are currently in progress. There is no certainty that the assays will reflect the current visual observation, but the core pulled out from the ground are similars to the surface stripping observations.

Figure 3: Altered and brecchiated Sediments and Rhyolite in drillhole WB21-03 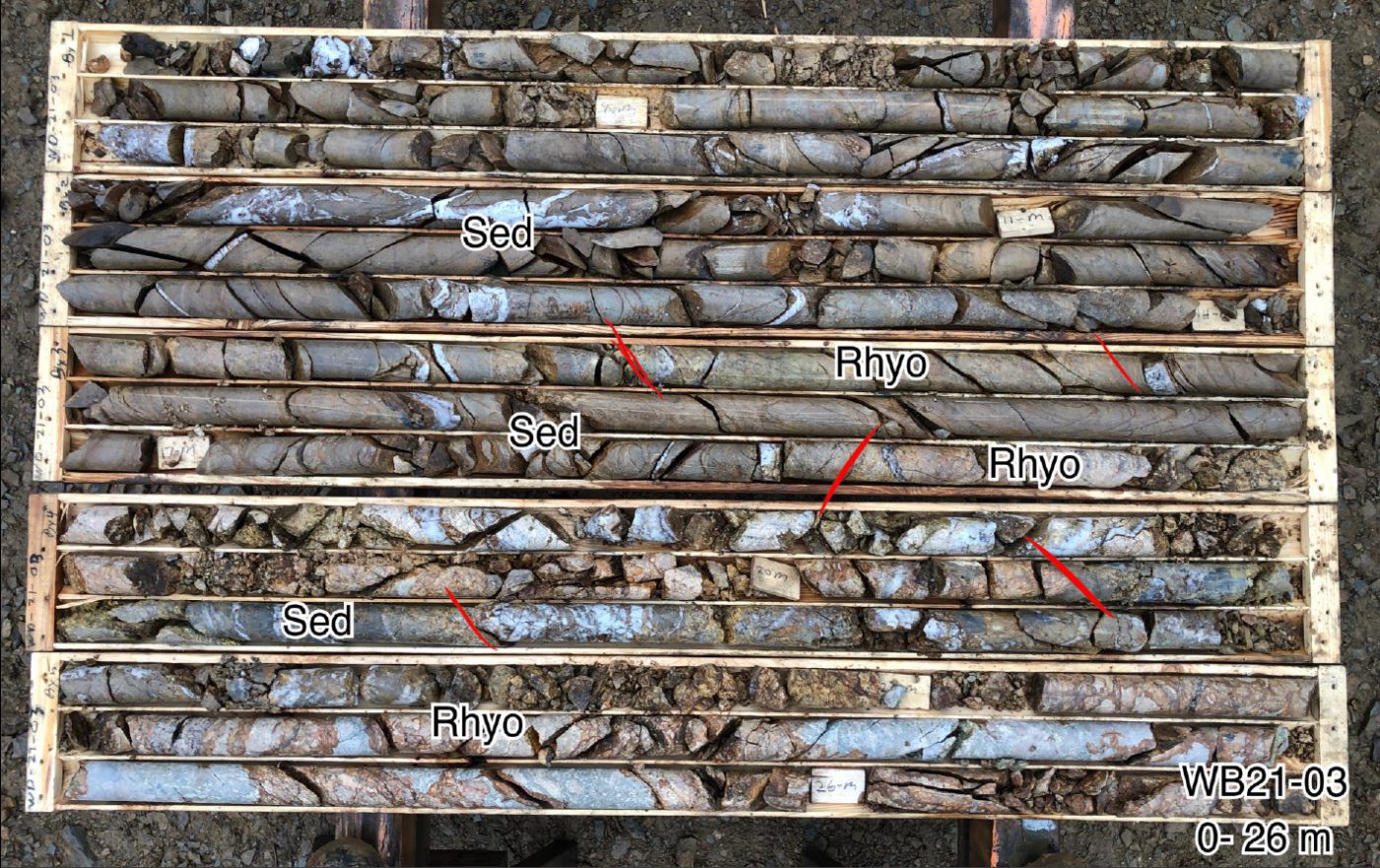 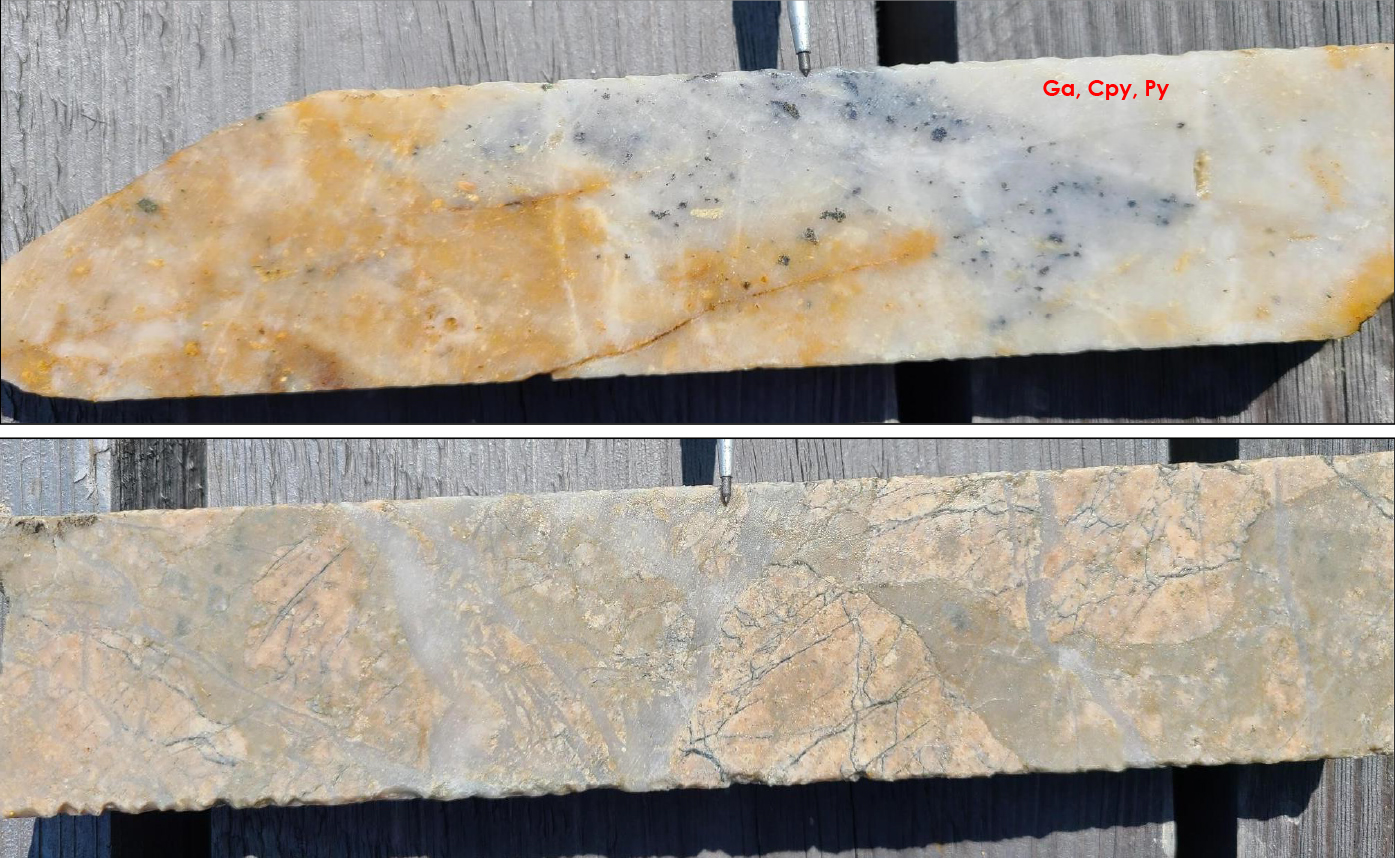 Following a detailed review of historical reports to identify the drilling pattern used by the previous operators, the technical team highlighted a diamond drill program done in 2008 by Blue Note Mining. At the time of the release, Blue Note Mining reported an interval of 11.16 g/t Au over 2.8 meters (hole WB08-11).

The Hole WB08-11 was drilled at the Williams Brook property about 5km northwest of the O’Neil Gold Trend (OGT). The mineralization occurs in quartz veins within an altered rhyolite with py-ga-sp disseminated mineralisation. Visible Gold was also noted in the hole.

The O’Neil Gold Trend (OGT) is a pervasive altered and brecciated rhyolite unit hosting significant gold showings and occurrences followed by trenching over a strike length of 700 meters. The geophysical signature of the OGT is expressed over 7km. The favourable unit (rhyolite) is similar and parallel to the structures hosting the “Williams 1” and “Williams 2” Gold Zones with selected drill results of 11.2 g/t over 2.8m, 2.1 g/t Au over 9.0m, and 1.0 g/t over 23m.

These trends are interpreted to be related to a major rifting in the New Brunswick Geological events and could represent a low sulphidation epithermal gold system. Along the OGT, the width of the altered horizon varies from 5 to 250 meters with an average apparent thickness of 150 meters.

Numerous quartz veins, quartz veinlets, stockworks and breccias were observed mostly perpendicular to the major trend and contain the gold mineralization. The OGT has never been drilled and many gold zones were discovered during the summer 2020 exploration campaign.

Dominique Gagné, PGeo, independent qualified person as defined by Canadian National Instrument 43-101 standards, has reviewed and approved the geological information reported in this news release. Neither TSX Venture Exchange nor its Regulation Services Provider (as that term is defined in the policies of the TSX Venture Exchange) accepts responsibility for the adequacy or accuracy of this release. Mr. Gagné is independent of the Company.

Rock samples were bagged, sealed and sent to the facility of ALS CHEMEX in Moncton, New Brunswick where each sample is dried, crushed, and pulped. The samples were crushed to 70% less than 2mm, riffle split off 1kg, pulverise split to better than 85% passing 75 microns (Prep-31B). A 30-gram subsplit from the resulting pulp was then subjected to a fire assay (Au-ICP21). Other screen sizes available. Duplicate 50g assay on screen undersize. Assay of entire oversize fraction.

Puma Exploration is a Canadian-based mineral exploration company with precious and base metals projects in early to advanced stages located in the Famous Bathurst Mining Camp (BMC) in New Brunswick, Canada. Great efforts will be made by the Company in the coming years to deploy its DEAR strategy (Development, Exploration, Acquisition and Royalties) in order to generate maximum value for shareholders with low shares dilution.

Learn more by consulting www.explorationpuma.com for further information on Puma.

Orea up 44% on gold mine court decision

Orea up 44% on gold mine court decision