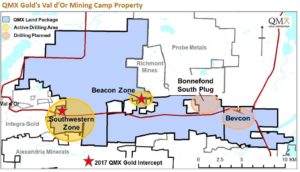 Drilling will commence shortly on the Bonnefond South Plug where a new structural model indicates mineralization remains open laterally and at depth. AUR Resources historical drilling in this area included 1.9 g/t gold over 55 metres, with 10.8 g/t gold over 3 metres; and up to 12.2 g/t gold over 12 metres in a shear zone in the adjacent volcanic rocks.

“Our primary focus for these drill programs was to identify favourable structures and trends, and to expand the limited geological information, however the gold intersections confirm our view on our highly prospective and extensive land package,” said Brad Humphrey, President and CEO. “Our team is excited about the results, and is keen to build on this success as we move to additional phases of drilling.”

“Diamond drilling again shows the potential for the discovery of new gold deposits. QMX’s extensive land package provides almost blanket coverage of the central part of the Val d’Or Camp where both a gold district and base metal district overlap. A strong commitment to exploration in such a target-rich environment, with the application of new ideas, models and interpretation, should lead QMX to great success,” commented David Rigg, Senior Vice President, Exploration.