Rare earths elements with tongue-twisting names like neodymium, praseodymium, and dysprosium are key to the production of military equipment and high-tech consumer electronics.  Yet due to lack of downstream processing facilities, the United States faces an uphill battle in any bid to challenge China’s dominance in the rare earth minerals sector. In an interview with Resource World, U.S. consultant James Kennedy explains how we got here and outlines the regulatory changes that are necessary to eliminate China’s rare earths monopoly.

Is it true that the United States dumped its Rare Earths stockpiles some years ago?

Does the U.S mining industry also intentionally disposes of REE resources, due to a 1980 regulatory change that pushed the industry into China?

Yes, in 1980 the NRC and IAEA (International Atomic Energy Agency) changed the definition of “source material (nuclear fuel)” to any refined or processed material with 0.05% Thorium (Th) and or (Uranium) (U).  Prior to this regulation, nearly 50% of the world’s rare earths and 100% of the world’s heavy rare earths came from the by-product production of Th-bearing Rare Earth Element (REE) resources.

To avoid the costs and liabilities resulting from this regulatory change, U.S. mining companies disposed of these resources. Today, just one existing and operating phosphate mine in the U.S. mine could exceed 100% of U.S. REE demand if the regulatory issue was resolved.  Solve the gypsum entrapment issue and the U.S. could meet close to 100% of global demand from existing mining waste containing economically recoverable REEs.

Currently, does the U.S. have problems obtaining its needed Rare Earths?

No. When it comes to the defense industry, China has established a gated pipeline. The Chinese make sure that sub-contractors in the defense industry can get all of the rare earth metals they need to meet our national security demand.  The defense industry plays its part in this game of ‘three card montey’ by defining “critical materials” at the alloying level. This allows defense contractors to buy Chinese metals, through a convoluted chain of custody, and claim to produce U.S. magnets. The Pentagon has been playing along with this Chinese charade for over a decade.

Electric cars such as the Toyota Prius use about 65 pounds of the Rare Earth neodymium for magnets and 3-megawatt wind turbines use 700 pounds. With applications such as these increasing, is there a strong demand for certain Rare Earths?

Yes, the REEs needed to make magnets and heat resistant magnets for military applications are those in most demand now. They are neodymium (Nd), praseodymium (Pr), dysprosium (Dy), terbium (Tb). The problem for most non-Chinese REE producers is that they cannot produce meaningful amounts of heavy REEs such as Dy and Tb. This is the case with MP Materials (which recently agreed to merge with Fortress Value Acquisition Corp. [FVAC-NYSE]). MP owns the Mountain Pass rare earth mining and processing facility in California.  It cannot produce material amounts of Dy, Tb, holmium (Ho), erbium (Er), thulium (Tm), terbium (Tb) or lutetium (Lu). So, it can never produce military-grade magnets or any other materials needed for hyper-sonic or directed energy weapons. The company is incompatible with U.S. national security needs. (NOTE: The Red Rhino 550-lb military grade (N52) neodymium magnet is encased in a thick steel cup. A nickel and copper compound coats the outer shell to provide a glossy yet rust and chip resistant finish.)

What is the supply situation for rare earths?

The U.S. disposes of enough REEs each year to meet the non-Chinese world’s demand.  If the U.S. resolved the 1980 NRC regulatory issues, as outlined in the House and Senate bills (H.R. 4410 and S. 2093), the U.S. and all non-Chinese countries could be entirely independent of Chinese REE production.

The economics of any successful REE project need to be based on something, anything, other than REEs. It is foolhardy to open a stand-alone rare earth mine when China controls global supply, price, and consumption.  If the U.S. wants to build an independent REE supply chain, it must build it upon uninterruptible REE resources. The only uninterruptible REE resources are the by-product resources that are disposed of under the 1980 NRC/IAEA regulation.  Everything else is subject to Chinese monopoly price manipulation.

Do you think that the Mountain Pass Mine has the right Rare Earths Element distribution for manufacturers in the United States?

MP Materials’ Mt. Pass mine has possibly the worst rare earth distribution of any operating rare earth mine in the world today.  Over 82% of the REE distribution is La and Ce.  These materials are in gross oversupply. The current cost of mining and processing these materials exceeds market prices. Consequently, if you subtract the dead-weight-value of the La and Ce, the Mt. Pass deposit is only contributing to 1.5% of global REE demand, not 15%, as the company likes to claim.  Because the companies’ economics are carried on the residual 18% balance of its REE distribution, mostly Pr and Nd, it economically vulnerable whenever Nd and Pr prices drift lower. Dysprosium and Terbium, critical for military grade magnets, are not present at recoverable levels, making the deposit incompatible with U.S. national security needs.  Due to the current oversupply in Ce and La, it’s hard to pick a worse deposit to mine.

With China becoming a Rare Earths importer for the past two years, does this mean that non-Chinse Rare Earth explorers and miners can successfully compete with China?

Yes and no. China is now outsourcing the dirty work of mining and oxide production to others.  This is no act of charity.  China intends to control these entities by pitting them against one and other. This should be obvious from its efforts to nurture regional producers in Africa and Asia.  China’s goal is to moderate “profitability” so that outside producers can never climb the value chain to metal production – and without non-Chinese metal production these REE producers are nothing more than low value suppliers to China’s REE monopoly (REE oxides have few meaningful tech uses).

So, yes, the U.S. and others will be allowed to produce low value REEs for China, in competition with other low-cost producers in Africa and Asia.  But what is the point in all of this if we are only feeding China’s monopoly?

Would you say that China’s dominance of the Rare Earths sector is waning?

No. China’s rare earth monopoly is approaching its zenith. The U.S. and other governments find themselves subsidizing domestic mining operations that will only serve China’s interests. MP Materials and Blue Line Corp. will use government subsidies to feed China’s monopoly at the point of metal and magnet production (representing over 90% of all value derived from REEs).

That is how dominant China is in this game, it has manipulated other countries into feeding its Dragon. Lynas Corp. a key source of rare earths outside China, and partner Blue Line recently won a U.S. Department of Defense contract to build a rare earths processing plant in Texas.

What are the biggest challenges currently facing non-Chinese Rare Earths explorers and miners?

They all suffer the delusion that there is a “rare earth market” based on western perceptions of what markets are. There is no ‘market’ – only a Chinese construct that resembles a market.

It’s like they are all trapped in some Chinese REE Matrix re-boot – and there is no Neo on the horizon. 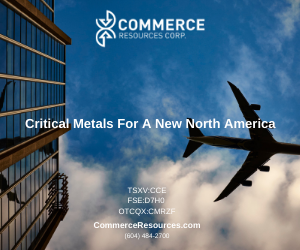 Commerce Resources Corp. [CCE-TSXV; CMRZF-OTC; D7H-FSE] is focused on the advancement work for the completion of the pre-feasibility study for their Ashram Rare Earth and Fluorspar Deposit, located in Nunavik, Quebec. The deposits are 100% held by the company and host one of the world’s largest rare earth element (REE) and fluorspar resources.

The rare earth elements are hosted in a carbonatite intrusive and dominantly in the mineral monazite, with bastnaesite and trace xenotine. This type of host rock and rare earth minerals account for roughly 80% of global rare earth oxide production. Neodymium and praseodymium, the key REEs used to make widely used permanent magnets, make up 21-24% of Ashram rare earth mineralization, which is significantly better than most of the major producers, including the Mountain Pass Mine in California.

The company has already demonstrated that a high-grade mineral concentrate of 40 to 50% Rare Earth Oxide (REO), at high recoveries (>75%), may be produced from the Ashram Deposit using standard and conventional methods. Therefore, the bulk of the grant funded metallurgical collaborations are focused on ways to further optimize this flowsheet and further reduce costs.

This essentially ability, to produce high-grade mineral concentrates, allows Ashram to stand out above many of its peers and puts it on or close to par with the mineral processing abilities of proven and active producers, including Mountain Pass (MP Materials), Mount Weld (Lynas), and all the major Chinese deposits, which all produce at least a 30-40% REO mineral concentrate prior to downstream processing. This is a fundamental key to low-cost production in the REE space as mineral concentrate of much higher purity of REEs is processed through the hydromet facility. This in turn also allows for a smaller hydromet plant as there is much less deleterious elements to process out. Collectively, this reduces the technical risk of the project, reduces OPEX, and reduces CAPEX. To date, some 18 organizations around the world have requested pilot plant samples to assess for potential off-take agreement.

Since the 2012 mineral resource estimate, a total of 86 drill holes (9,625 m) have been completed with numerous intersections higher than the head grade of the current resource. These include 2.32% REO over 96.7 metres (EC14-098), and 3.02% REO over 28.4 metres (EC16-159). A Pre-Feasibility Study on the project is ongoing and when completed will outline the project scenario and projected costs in detail. Considering the PEA utilized a mineral concentrate of only 10% REO, it will be very interesting to see how this improvement in mineral concentrate grade by over 4X, based on metallurgy completed since the PEA, will impact the overall project economics. As well, there is also the value of the fluorspar by-product which, although part of the 2012 mineral resources, was not incorporated into the project’s PEA. The fluorspar market is heating up with prices near all-time highs, and the fact that Ashram hosts one of the largest fluorspar deposits in the world, one can expect a lot of interest from that industry. 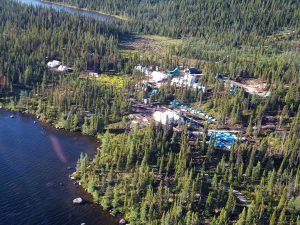 The company is actively engaged in the academic and institutional research and development space with both federal and provincial collaborations. These include mineral processing optimization programs led by CanmetMINING, a branch of Natural Resources Canada, tailings characterization led by the Centre Eau Terre Environnement of the Institut national de la recherche scientifique (INRS), as well as petrogenesis characterization (origins and mechanisms of rock formation and mineralization) of the Eldor Carbonatite Complex and the Ashram Deposit by McGill University and University of Windsor, respectively. The Company recently announced, in news dated August 25th, 2020, that it has also entered into a collaboration with the Université du Québec en Abitibi-Témiscamingue (UQAT) and Industrial Waste Technology Centre (CTRI) involving optimization of the grinding and flotation circuits. In each of these collaborations Commerce Resources provides primarily Ashram Deposit material and geological support with the bulk of the funding for the programs being provided by various provincial and federal grant program.

The Commerce Resources Ashram Rare Earth and Fluorspar Project represents one of the few REE projects in the world that offers strong grades, high-grade mineral concentrates using standard methods, excellent recoveries, and a by-product that does not negatively impact REE recoveries – all in a pro-mining jurisdiction with strong provincial government support. Commerce is a stock to watch and a play on the ever-increasing insecurity the world has with their Chinese based supply chains.

1 thought on “Rare Earths sector a challenge: can anyone stand up to the Chinese?”