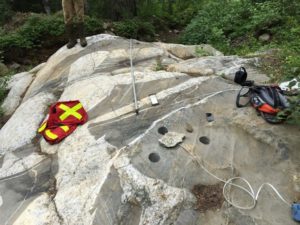 The results of the PEA include a pre-tax Net Present Value (“NPV”) of $312 million at a discount rate of 8% and a pre-tax Internal Rate of Return (“IRR”) of 62.2%. The PEA focused on only a portion of the Georgia Lake project centered around an area referred to as the Nama Creek Main Zone, excluding additional inferred resources the Company has defined on other areas of the property as included in the updated resource estimate disclosed on June 27, 2018 and filed on SEDAR on August 10, 2018. In the PEA, DMT covered all relevant topics for the development of the mine and the production of spodumene concentrate, including project infrastructure, mine design and operations, recovery, processing and reclamation.

“The completion of the PEA is a key milestone in the development of our Georgia Lake lithium property,” said Martin Stephan, Chief Executive Officer of Rock Tech. “We are pleased that the results confirm our optimism with respect to the project and confirm for our shareholders that their investments in advancing this project have been a success. Although the PEA focused only on a portion of our NI 43-101 resource estimate, it shows the real value of our company’s assets and proves the excellent profit potential with an expected annual Net Income of $39.9 million.”

The production scenario contemplated in the PEA and disclosed in the press release called for total production of 1.1 million tonnes of chemical grade (6.2%) spodumene concentrate. This is based on a portion of the Measured, Indicated and Inferred resources included in the Company’s Technical Report dated August 10, 2018, prepared by DMT. This technical report estimated the resources at Rock Tech’s Georgia Lake property, with a cut-off of 0.65% Li2O, to be as follows:

While the Company did not include all of the inferred resources delineated on the property, a portion was included in the PEA. The PEA is preliminary in nature, that it includes inferred mineral resources that are considered too speculative geologically to have the economic considerations applied to them that would enable them to be categorized as mineral reserves, and there is no certainty that the PEA will be realized.

All scientific and technical information in this news release was reviewed and prepared under the supervision of Karl-Stephan Peters, EurGeol 787, an independent Qualified Person to Rock Tech.

Rock Tech will file the Preliminary Economic Assessment on the System for Electronic Document Analysis and Data Retrieval (“SEDAR”) within 45 days of this news release.

DMT is a global consortium, providing interdisciplinary services in the Mining, Oil & Gas, Civil Engineering & Infrastructure and Plant Engineering markets with a client roster that includes Anglo American, BHP Billiton, OMV, E.ON, Schlumberger, De Beers and leading institutes such as The World Bank and the Asian Development Bank. DMT occupies 30 offices worldwide and belongs to the German certification agency TÃœV NORD GROUP. To date, DMT has completed several thousand projects in over 150 countries, working in over 25 countries in a typical year.

Rock Tech Lithium is an exploration company focused on acquiring and exploring properties in the field of lithium. The Georgia Lake Lithium project develops a lithium-rich pegmatite vein deposit for the purpose of mining. The deposit was discovered in the Thunder Bay Mining district in northwestern Ontario/Canada, close to the Lake Superior, as early as 1955. Rock Tech Lithium has been working increasingly on the property since 2016 – in a market environment, where the trend for electric cars on the international market has been rising steeply for years. Analysts expect that more than 25% of newly sold cars in 2025 will be electrified, with the demand for batteries and therefore battery metals such as lithium expanding rapidly.

On behalf of the Board of Directors of the Company,