Rockridge Resources Ltd. [TSX-V: ROCK, OTCQB: RRRLF, Frankfurt: RR0] (â€œRockridgeâ€ or the â€œCompanyâ€) is pleased to announce that its 3,000 metre minimum drill program has commenced at its high-grade Raney Gold Project located southwest of Timmins, Ontario, Canada (the â€œRaney Gold Projectâ€ or â€œPropertyâ€). The drill program will include approximately 11 drill holes which will range in depth between 200 metres and 350 metres to test the strike and down-plunge extent of the high-grade intercepts identified during the previous drilling programs. 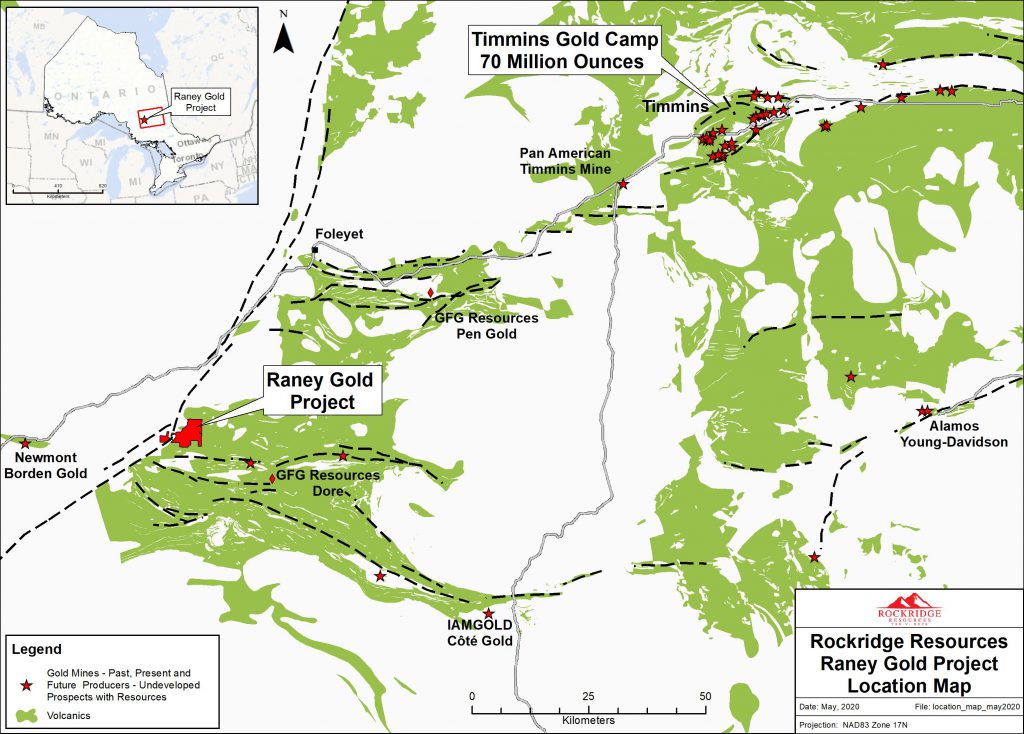 “We are excited to continue drilling the high-priority targets at our strategically located Raney Gold Project.” said Grant Ewing, CEO of Rockridge Resources. â€œOur team has carefully selected targets to follow-up on the high-grade gold mineralization previously discovered at Raney, including a highlight intercept of 28 grams per tonne gold over 6 metres at approximately 100 metres depth from our last program. With only 5,500 metres of historical drilling at the Project, we have identified other prospective targets that will be drill tested with the intent of making new discoveries elsewhere on the property. This program will be an important catalyst for Rockridge in the coming months as we continue to see momentum building in the gold market.â€

â€¢ The Raney Gold Project is a large prospective gold property covering ~2,800 hectares located ~110 km southwest of the prolific gold district of Timmins, Ontario
â€¢ A fully-funded and permitted minimum 3,000 metre diamond drilling program (approximately 11 holes) is now underway
â€¢ The program is being carried out by Missinaibi Drilling Services Ltd., a 100% Aboriginally owned and operated independent drilling contractor company; their management has many years of experience including substantial expertise in the Timmons district where they work with Newmont at the Borden Mine Project adjacent to the Raney Project
â€¢ A drilling program completed earlier in the year (2,070 metres in nine diamond drill holes) to assess the potential of the mineralized gold system returned a highlight intercept of 28.0 g/t gold over 6.0 metres (see news release dated April 29, 2020)
â€¢ A recently completed summer field exploration program focused on delineating and prioritizing target areas along the broad gold bearing structural zone
â€¢ Gold mineralization is associated with broad intervals of higher concentrations of narrow quartz veins hosted in an extensive structural corridor that may extend over several hundred metres, with no drilling completed over a large extent of this corridor; the mineralized structure is open along strike and at depth
â€¢ Property has excellent access and infrastructure and is accessible by paved and forestry roads bringing the drill costs down

The first five holes of the drill program will test priority targets down-plunge of known high-grade gold zones. Specifically, a primary drill target will be the down-plunge extension of the previously reported high-grade drill intercept which returned 28.0 g/t Au over 6.0 metres (uncut) from 125.0 metres to 131.0 metres in hole RN 20-06. 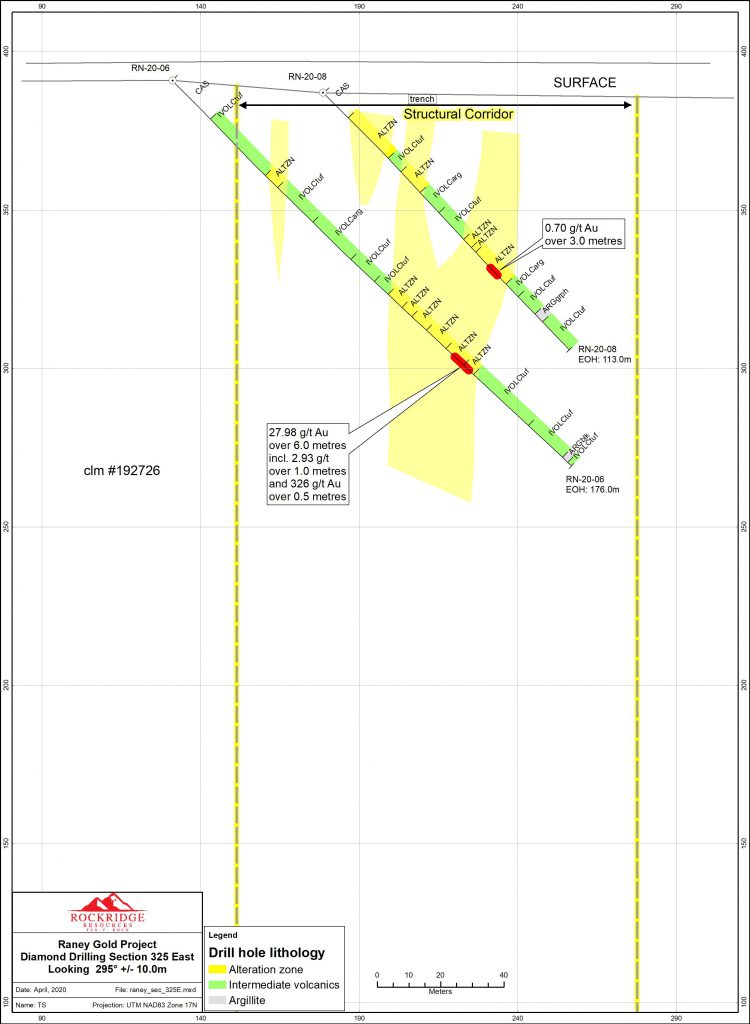 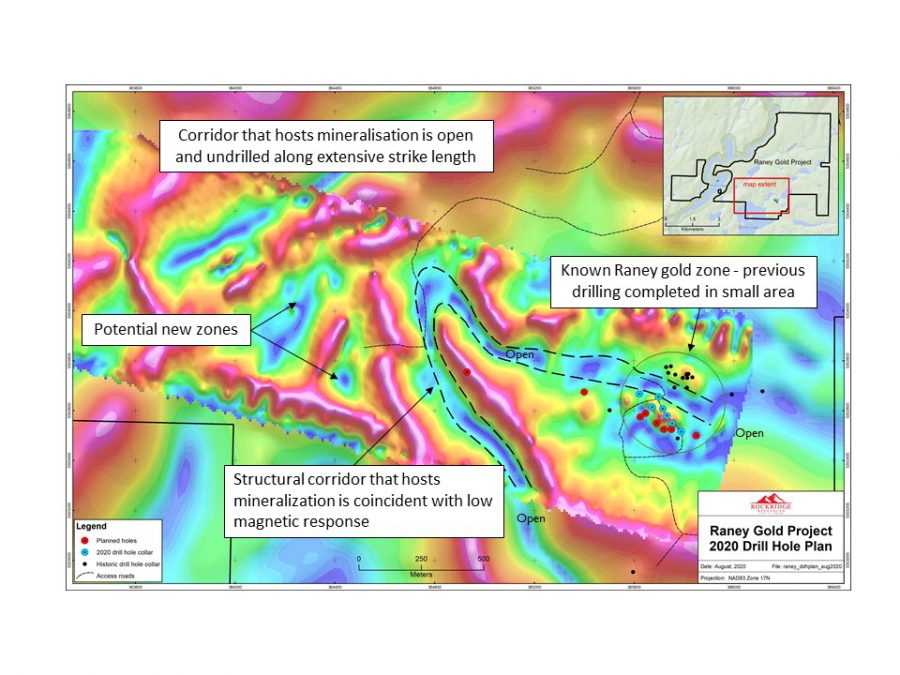 The Raney Gold Project is strategically located within the highly prospective west extension of the Abitibi Greenstone belt, proximal to several regional deposits. Newmontâ€™s operating Borden Gold Mine (reserves of 4.17 MT @ 6.38 g/t Au for ~860k oz. Au reported in 2015) is located 35 km west of Raney. IAMGOLD and JV partner Sumitomo Metals Mining recently decided to proceed with construction of their Cote gold project located 75 km southeast of Raney. The Cote project, estimated to contain gold reserves of ~7 million ounces (~236MT @ 0.96 g/t Au), is noted as a â€œworld-classâ€ deposit by IAMGOLD. GFG Resources is a close neighbour that has acquired a large land package in the area including its Pen and Dore Gold Projects.

A total of 2,070 metres in nine diamond drill holes were completed during the recent winter diamond drilling program. The drill program focused on the main zone over a strike extent of approximately 225 metres that produced the best historic intercept of 6.5 g/t gold over 8.0 metres back in 2010. Silicification and minor carbonate alteration were recognized, however gold mineralization appears to be closely related to intervals of high quartz vein density. The quartz veins are hosted in a steeply dipping alteration zone dominated by intermediate volcanic rocks consisting of lapilli tuffs and bedded argillites, with lamprophyre dikes. The quartz veins crosscut and run parallel to a weak fabric, and range in thickness from 0.5 cm to 20 cm in width.

A zone of increased vein density has been noted where the historic visible gold intercepts occur. The recently drilled high-grade intercept of 28.0 g/t over 6.0 metres (uncut) from the 2020 winter program was the fourth drill hole on the Property to intercept visible gold, and all these occurrences were in the main zone near the 100-metre level. The broad structural corridor that hosts the mineralization is up to 125 metres wide and extends well beyond the area tested by drilling. No drilling has been conducted along this corridor except for the ~225-metre-long main zone.

Historical drilling at the Raney Gold Project focused on identifying near-surface gold mineralization. Previous exploration on the Property from 1972 to 1991 consisted of prospecting, mapping, sampling, trenching, winkie drilling, ground geophysics, stripping, and some limited diamond drilling. This was followed by exploration work during the 2009 to 2010 period. The best intercept returned from historical drilling was 6.5 g/t gold over 8.0 metres. The property is underlain by mafic volcanics to the north, and felsic to intermediate volcaniclastics to the south. The felsic volcaniclastics are host to the gold zones. Quartz feldspar porphyry dykes and sills and minor mafic intrusives occur throughout the Property. The porphyries are generally massive but may be sheared and hydrothermally altered and veined in places.

A 100 metre-wide intensely sheared and altered quartz-feldspar porphyry body is located just to the south of the main Raney gold showing. Gold mineralization exposed on the surface and intersected in drill holes on the property is typical of the lode gold class of gold deposit which is the dominant gold deposit type in the Abitibi Greenstone Belt. Gold mineralization on the property is associated with the intensely sheared and altered zones within the felsic tuffs, and higher grades tend to occur where quartz veining is present.

The Property is in the Archean Swayze Greenstone Belt, considered to be the southeast extension of the Abitibi Greenstone Belt, which hosts the world-class Timmins and Kirkland Lake gold districts. Numerous gold occurrences occur throughout the district and several world-class mines have been developed. These deposits are responsible for a significant portion of the worldâ€™s cumulative gold production and are often characterized by gold enriched quartz vein systems associated with supracrustal belts in low to medium grade metamorphic terranes. Gold mineralization at the Property is typical of the mesothermal lode gold deposit model. Rockridge holds an option to earn a 100% interest in the Raney Gold Project which is expected to complete by the end of this program.

Todd Keast, P.Geo., a â€œqualified personâ€ for the purposes of National Instrument 43-101 – Standards of Disclosure for Mineral Projects, and the Raney Gold Project Manager for Rockridge Resources Ltd., has reviewed and approved the scientific and technical disclosure in this news release.

Rockridge Resources is a publicly traded mineral exploration company focused on the acquisition, exploration, and development of mineral resource properties in Canada and other mining-friendly jurisdictions. The Companyâ€™s Raney Gold Project is a high-grade gold exploration project located in the same greenstone belt that hosts the world-class Timmins and Kirkland Lake lode gold mining camps. The Company’s Knife Lake Project is in Saskatchewan, which is ranked as the #3 mining jurisdiction in the world by the Fraser Institute. The project hosts the Knife Lake deposit, which is a VMS, near-surface copper-cobalt-gold-silver-zinc deposit open along strike and at depth. Rockridgeâ€™s goal is to maximize shareholder value through new mineral discoveries, committed long-term partnerships, and the advancement of exploration projects in geopolitically favourable jurisdictions.

Additional information about Rockridge Resources and its project portfolio can be found on the Companyâ€™s website at www.rockridgeresourcesltd.com. Rockridge currently has 51.1 million shares issued and outstanding.