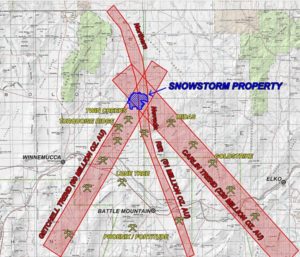 Seabridge Gold Inc. [SEA-TSX; SA-NYSE] has completed the acquisition of a 100% interest in the Snowstorm Project from PFR Gold Holdings, LP (PFR), formerly known as Paulson Gold Holdings, LP. The Snowstorm Project consists of 31 square miles of land holdings strategically located at the projected intersection of three of the most important gold trends in Northern Nevada: the Carlin Trend, the Getchell Trend and the Northern Nevada Rift Zone (see map).

Seabridge completed the acquisition by purchasing all of the outstanding shares of the private company that owns a 100% interest in the Snowstorm Project in exchange for issuing to PFR 700,000 Seabridge common shares plus 500,000 warrants exercisable for four years at $15.65 per share. In addition, Seabridge agreed to pay PFR (i) a conditional cash payment of US $2.5 million if exploration activities at Snowstorm result in defining a minimum of 5 million ounces of NI 43-101 compliant gold resources, and (ii) a further cash payment of US $5 million on the delineation of an additional 5 million ounces of gold resources. Canaccord Genuity Corp. acted as financial advisor to PFR.

The Snowstorm property consists of 700 mining claims and 5,800 acres of fee lands carefully assembled in a private company over 15 years and explored over the past 10 years. Seabridge has staked an additional 260 claims totaling 5,200 acres that are contiguous to the claims purchased from PFR. The Snowstorm acquisition also includes an extensive package of data generated by previous operators.

Although potential targets are hidden under Tertiary cover, the existing data supports the project’s outstanding exploration potential. Geological and geochemical evaluations of Snowstorm have documented hydrothermal alteration zones consistent with large Northern Nevada deposit types. Geophysical surveys have confirmed the structural settings which host large Northern Nevada deposit types. Limited drilling has demonstrated that some of the target areas are at a depth amenable to surface exploration and resource delineation.

Commenting on the deal, Paulson & Co.’s President John Paulson stated,”We chose Seabridge as the best home for the Snowstorm Project because they share our vision of the project’s geologic potential and their exploration team has done an outstanding job of growing the resources and reserves on their existing projects. Moreover, Seabridge’s projects, particularly KSM, provide us with significant leverage to a higher gold price.”

Seabridge Chairman and CEO Rudi Fronk said, “We are very pleased to gain Paulson & Co. as a shareholder. The Paulson team has a deep understanding of our business and the opportunities that lie ahead. We look forward to their advice and assistance as we grow the value of our Company. Seabridge has been an industry leader in finding additional gold resources over the past decade. For some time now, we have been looking for a large-scale asset in Nevada which remains one of the world’s best environments for finding large gold deposits. The Snowstorm acquisition accomplishes this objective. This project has all the earmarks of an outstanding exploration play and we appreciate the opportunity to capitalize on its exceptional potential.”

Seabridge Gold holds a 100% interest in several North American gold resource projects, including its principal assets, the KSM and Snip Gold properties near Stewart, British Columbia, and the Courageous Lake gold project in the Northwest Territories.