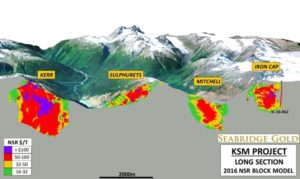 Seabridge Gold Inc. [SEA-TSX; SA-NYSE] said Friday May 4 that it has raised $19.7 million from a previously announced non-brokered flow-through financing that will be used to fund exploration at the company’s KSM Project in northwestern British Columbia.

The Iron Cap is one of four large gold/copper porphyry deposits that are situated at the KSM Project. Seabridge has said an updated resource estimate, dated February 9, 2018, incorporates all previous drilling, plus 10,383 metres of diamond core drilling completed in 11 holes drilled in 2017. All 11 holes returned wide zones of significant grade.

The 2017 drill program at Iron Cap confirmed that the grade of the deposit is increasing down dip and to the northwest.

“As in previous years, we are confident that this year’s program should add sufficient resource ounces of gold to more than offset the share issuances from this financing. Increasing gold ownership per share remains an important objective for Seabridge,” he said.

Seabridge Gold holds a 100% interest in several North American gold resource projects. The company’s principal assets are the KSM and Iskut properties near Stewart, B.C., and the Courageous Lake gold project in the Northwest Territories.

KSM is one of the world’s largest undeveloped gold projects as measured by reserves. It is estimated to contain 38.8 million ounces of gold and 10.2 billion pounds of copper in proven and probable reserves.

Seabridge recently said drilling has commenced at the Courageous Lake Project. The company said two core rigs will execute a planned 36-hole, 7,200-metre program to test seven separate targets along a geophysical and stratigraphic break that hosts the Walsh Lake deposit, which Seabridge discovered in 2012.

Walsh Lake is located about 10 km south of the FAT deposit and is connected to that deposit by a local road network. The Walsh Lake resource appears to be a southern extension of the historical Tundra Mine, a high-grade producer that was abandoned in 1999 as the gold price fell to a 25-year low.