Searchlight Resources Inc. (“Searchlight” or the “Company”) (TSXV:SCLT)(OTC PINK:CNYCF) (FSE:2CC2) is pleased to announce the Company has completed the initial prospecting program on the Kulyk Lake Uranium project, located approximately 165 km north of La Ronge, Saskatchewan, and 65 km south of the Key Lake Uranium Mine.

The field program, completed by Axiom Exploration Group Ltd. (Axiom), has located a zone of strong surface radioactivity within newly mapped pegmatites on a bedrock ridge southwest of Kulyk Lake (Map 2). A total of 49 grab samples were collected, along with 84 scintillometer readings. The scintillometer readings included 47 values over 1,000 counts per second (cps), with values up to 13,000 cps. The grab samples will be submitted to the Saskatchewan Research Council laboratory in Saskatoon for complete analysis.

“This is an excellent result, with just 3 days of first pass prospecting outlining a radioactive surface showing of at least 150 m x 50 m, in an area with no previous documented work”, stated Stephen Wallace, Searchlight’s CEO. “This result, along with the potential rare earth results, give Searchlight plenty of targets for follow-up exploration”. 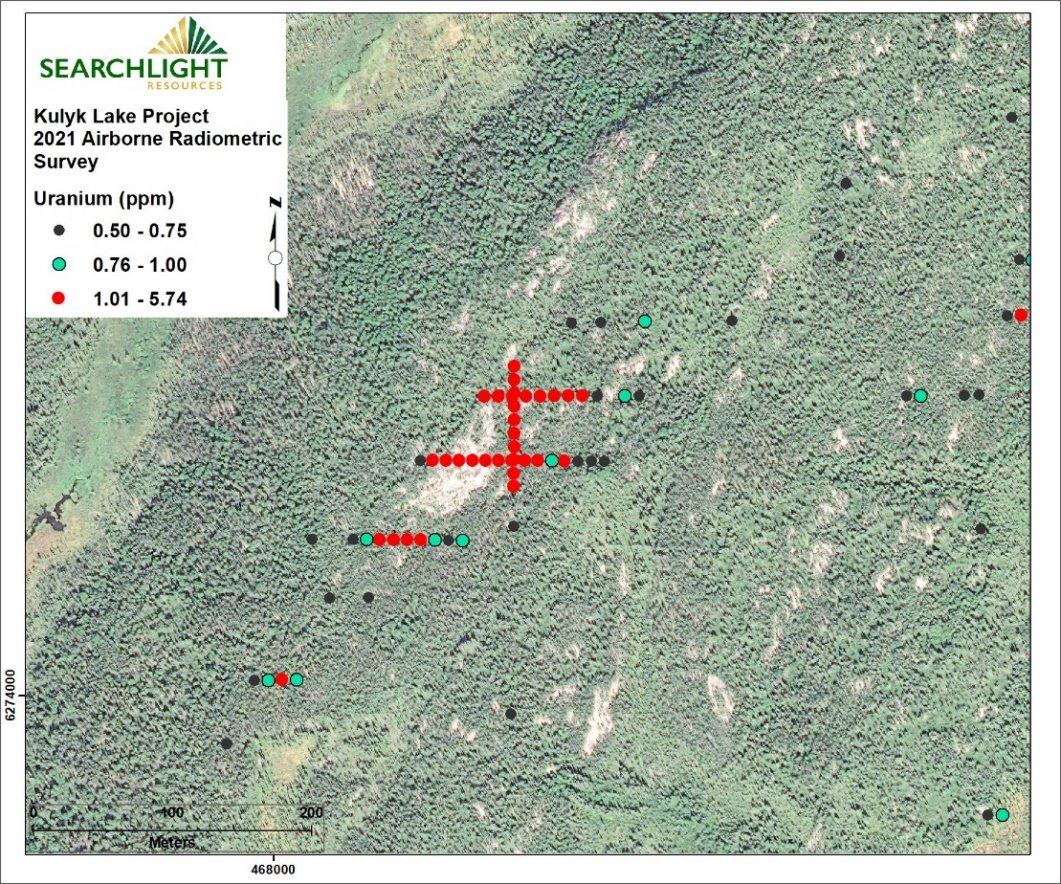 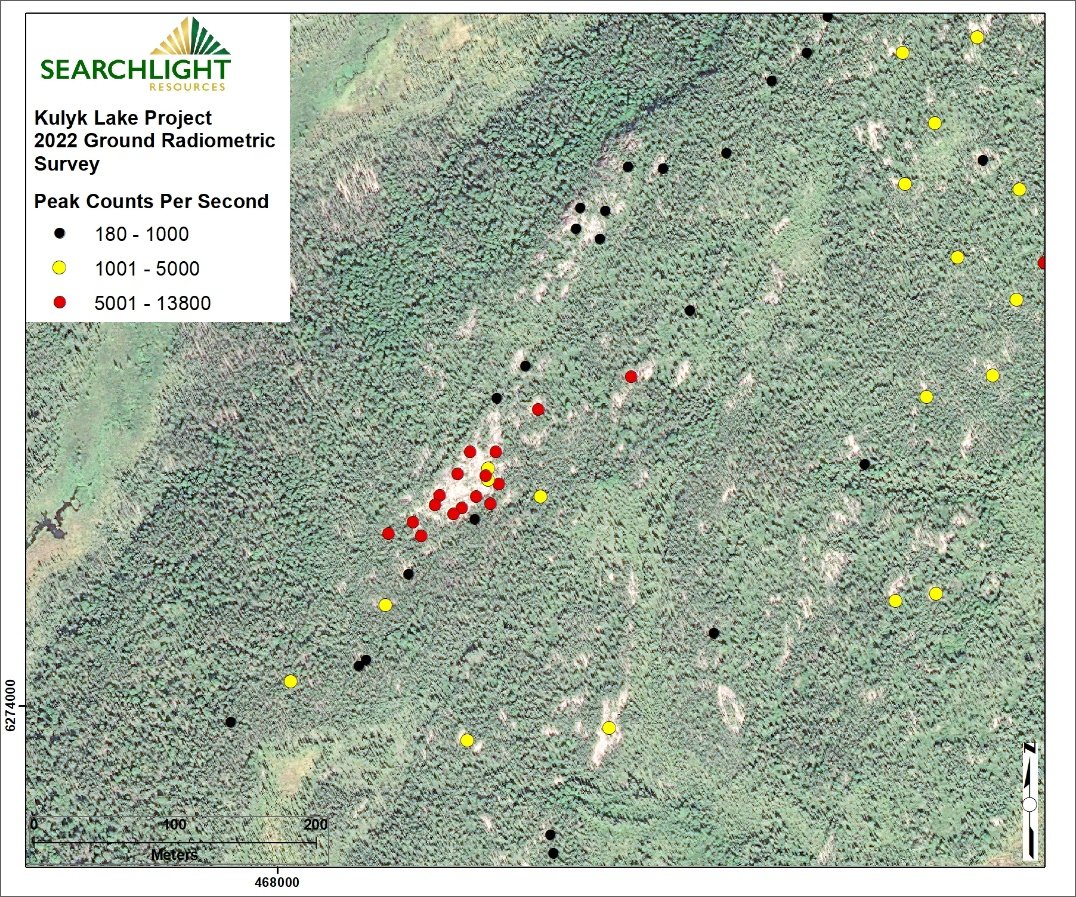 The Kulyk Lake project covers 349 square kilometers of 100%-held staked claims located approximately 165 km north of La Ronge, Saskatchewan, and 65 km south of the Key Lake Uranium Mine. Searchlight Resources originally staked the claims based on the Fanta showing, a historically known occurrence of massive monazite, and the Eldorado uranium showing on the south shore of Kulyk Lake.

Mineral exploration was previously carried out between 2009 and 2011, primarily on the south shore of Kulyk Lake. This area, including the Eldorado uranium zone and the Fanta rare earths zone and immediate surroundings, were systematically mapped and trenched by Terralogic Consultants [2]. Results included 0.785% U3O8 over 1.1 m from sample DFKJR040 at the Eldorado showing, and 0.793% U3O8 in a sample located near the Yellow Brick Road showing, named for the yellow uranium staining on surface.

An exceptionally coarse-grained igneous rock with interlocking crystals, usually found as irregular dikes, lenses, or veins, especially at the margins of batholiths. Most grains are at least 1 cm in diameter. Although pegmatites have gross compositions similar to other rock types, their composition is generally that of granite. The composition may be simple or complex and may include rare minerals rich in such elements as lithium, beryllium, cesium, fluorine, niobium, tantalum, uranium, and rare earth elements. Pegmatites represent the last and most hydrous portion of a magma to crystallize, and hence contain high concentrations of minerals present only in trace amounts in granitic rocks.

Natural gamma radiation in surface prospecting reported in this news release was measured in counts per second (cps) using a handheld RS-125/230 gamma-ray scintillometer. The reader is cautioned that Searchlight uses scintillometer readings as aÂ preliminaryÂ indication of the presence of radioactive materials (uranium, thorium and/or potassium), and that scintillometer results may not be used directly to quantify or qualify uranium or thorium concentrations of the rock samples measured.

Stephen Wallace, P.Geo., is Searchlight’s Qualified Person within the meaning of National Instrument 43-101 and has reviewed and approved the technical information contained in this news release.

Searchlight Resources Inc. (TSXV:SCLT, OTC PINK:CNYCF, FSE:2CC2) is a Canadian mineral exploration and development company focused on Saskatchewan, Canada, which has been ranked as the top location for mining investment in Canada by the Fraser Institute. Exploration focus is on Rare Earth Elements, uranium, battery minerals and gold throughout the province. Searchlight holds over 1,395 square kilometres of claims in Saskatchewan.

Information set forth in this news release contains forward-looking statements that are based on assumptions as of the date of this news release. These statements reflect management’s current estimates, beliefs, intentions and expectations. They are not guarantees of future performance. The Company cautions that all forward-looking statements are inherently uncertain and that actual performance may be affected by a number of material factors, many of which are beyond the Company’s control. Such factors include, among other things: risks and uncertainties relating to the Company’s limited operating history and the need to comply with environmental and governmental regulations. Accordingly, actual and future events, conditions and results may differ materially from the estimates, beliefs, intentions and expectations expressed or implied in the forward-looking information. Except as required under applicable securities legislation, the Company undertakes no obligation to publicly update or revise forward-looking information.