Searchlight Resources Inc. (“Searchlight” or the “Company”) (TSXV:SCLT)(OTC PINK:CNYCF)(FSE:2CC2) is pleased to announce the initial results of the high-resolution aeromagnetic and radiometric surveys on the Company’s Kulyk Lake Rare Earth Element (“REE”) project, located approximately 165 km north of La Ronge, Saskatchewan, and 65 km south of the Key Lake Uranium Mine.

Searchlight uses thorium as a pathfinder for rare earth elements in the mineral monazite, which is the principal mineral in the known Kulyk Lake REE showing (Map 2). The highest thorium value from the radiometric survey (5.3 ppm) was located over the known Kulyk Lake REE trenches which yielded historical assays of 56.18% Total Rare Earth Oxides (“TREO”). Additionally, the radiometric survey identified the Kulyk Lake target as part of a larger anomalous thorium zone, at least 3 kilometres in length (Maps 2 and 4).

Uranium results from the radiometric survey were equally positive, identifying a significant new, previously unknown uranium target (Maps 3 and 5), as well as pinpointing known uranium showings, including the Eldorado showing with historical assays of 0.785 % U3O8. The newly identified anomalous uranium zone has multiple high values, ranging up to 5.74 ppm, the highest uranium value of this survey (Maps 3 and 5).

“The uranium results are strongest in an area where there are no previous uranium showings, and this New Anomalous Uranium Zone represents a priority target”, stated Stephen Wallace, CEO. “Though the Kulyk claims were staked for the Rare Earth potential, the Company will now add uranium to our follow-up exploration targets”. 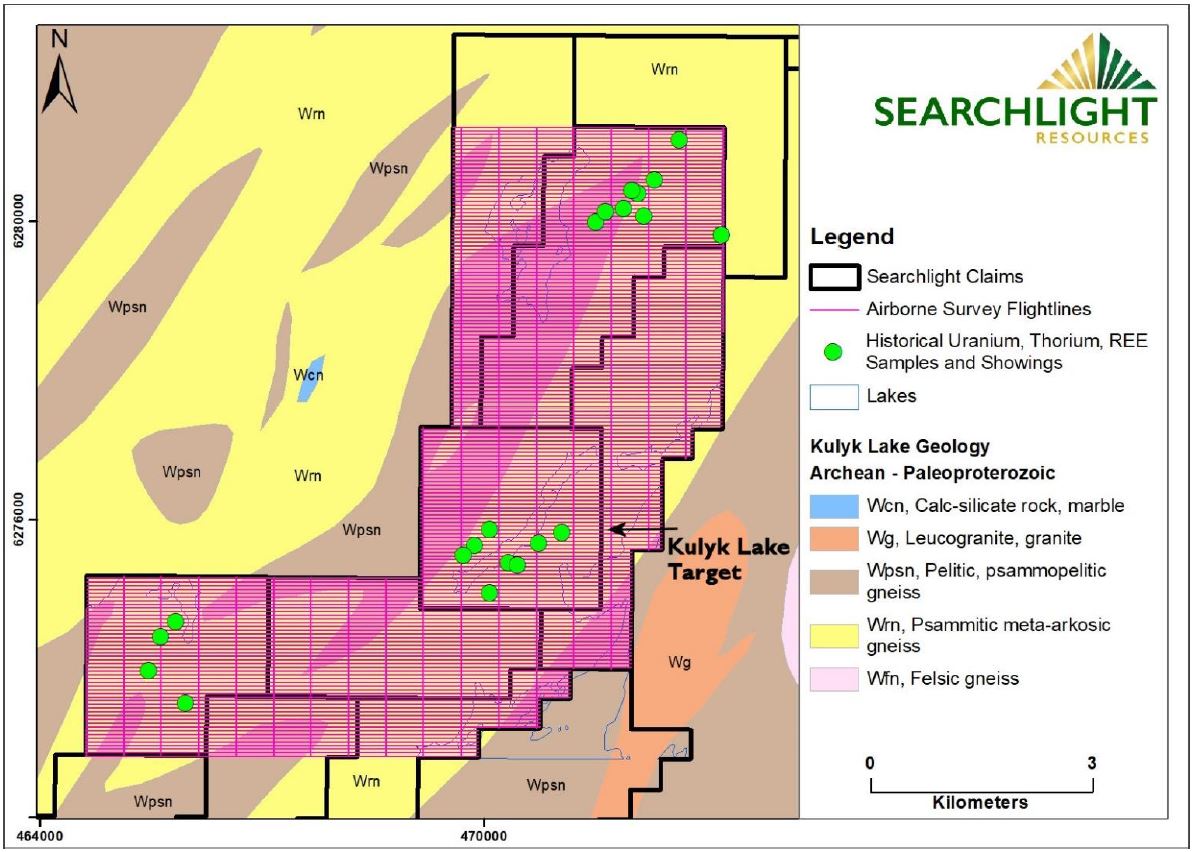 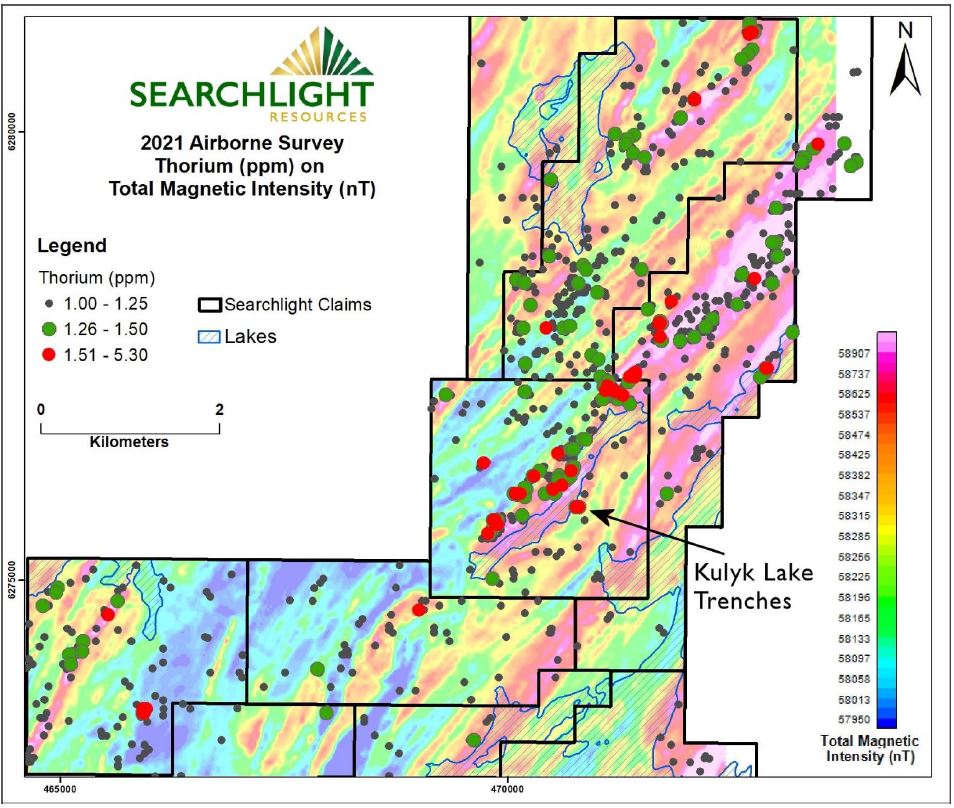 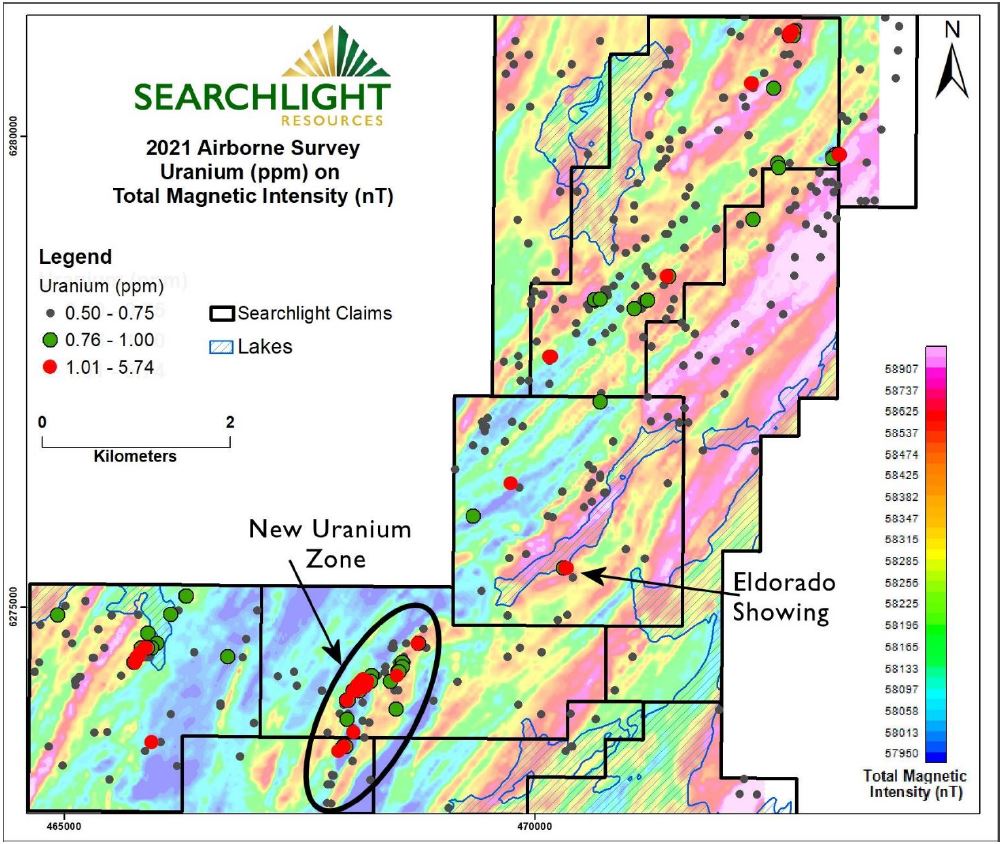 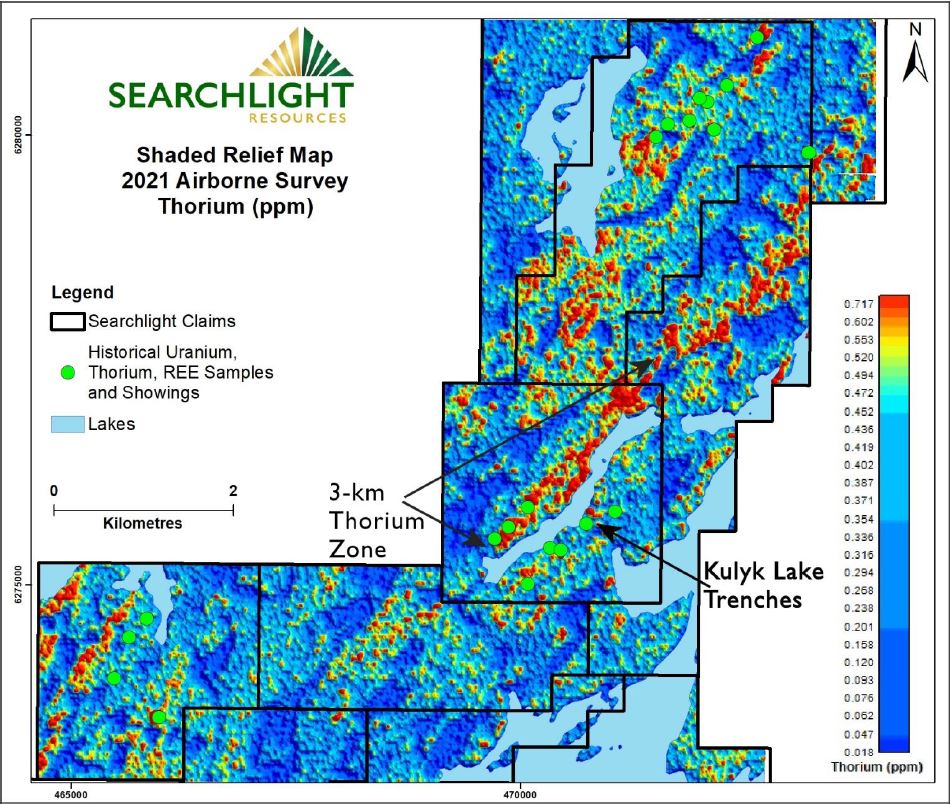 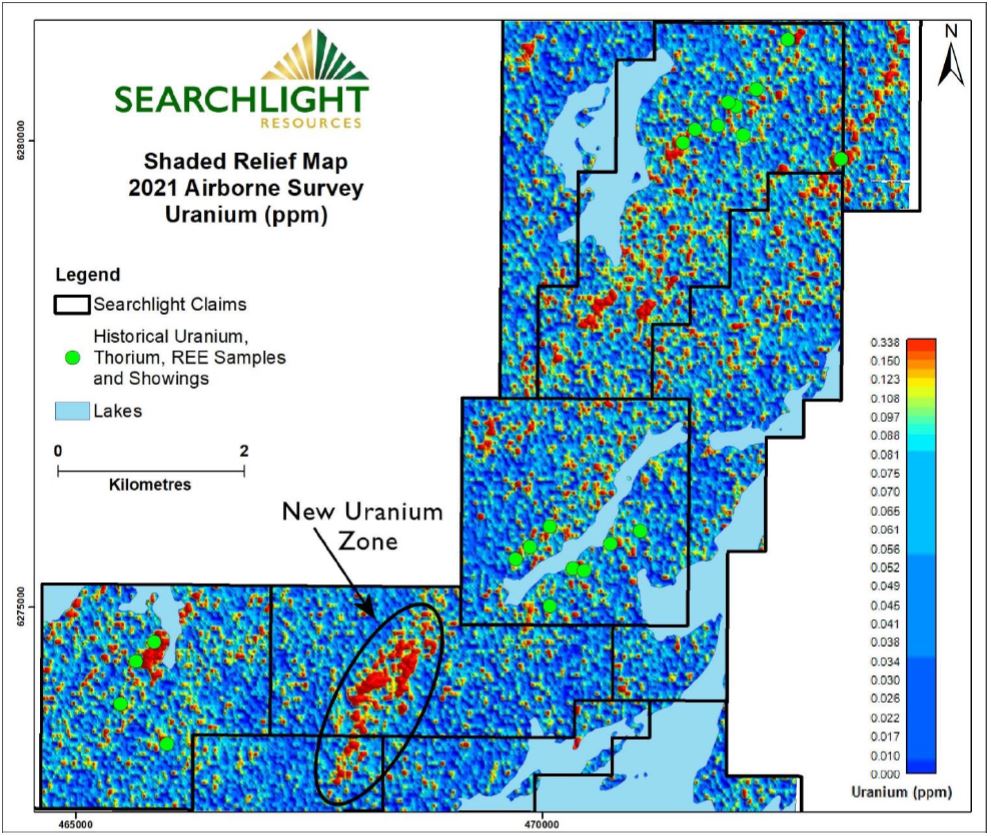 Stephen Wallace, P.Geo., is Searchlight’s Qualified Person within the meaning of National Instrument 43-101 and has reviewed and approved the technical information contained in this news release.

Searchlight Resources Inc. (TSXV:SCLT, US:CNYCF, FSE:2CC2) is a Canadian mineral exploration and development company focused on Saskatchewan, Canada, which has been ranked as the top location for mining investment in Canada by the Fraser Institute. Exploration focus is on gold and battery minerals throughout the Province, concentrating on projects with road access.

Information set forth in this news release contains forward-looking statements that are based on assumptions as of the date of this news release. These statements reflect management’s current estimates, beliefs, intentions and expectations. They are not guarantees of future performance. The Company cautions that all forward-looking statements are inherently uncertain and that actual performance may be affected by a number of material factors, many of which are beyond the Company’s control. Such factors include, among other things: risks and uncertainties relating to the Company’s limited operating history and the need to comply with environmental and governmental regulations. Accordingly, actual and future events, conditions and results may differ materially from the estimates, beliefs, intentions and expectations expressed or implied in the forward-looking information. Except as required under applicable securities legislation, the Company undertakes no obligation to publicly update or revise forward-looking information.