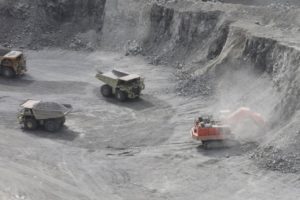 Cyclicality in global resource markets has long been a challenging fact of life in mining. While select group of companies are reaping the benefits after the price of zinc hit a 10-year high last year, others in sectors like uranium have suffered as the price of that commodity languishes.

So it comes as no surprise that fluctuating commodity prices is the top risk facing mining and metals companies this year, according to an annual survey of Canadian mining executives by KPMG in Canada.

As volatility re-emerges in the commodities markets, shifting prices will be a key theme as mining industry participants from around the world gather in Toronto this weekend and next week for the 86th annual Prospectors & Developers Association of Canada convention.

Below is a list of the Top 10 risks facing Canadian mining and metals companies in 2018:

Commodity price, access to capital, and maintaining a social license to operate remained high on the list and represent significant risks to the industry.

KPMG said Macroeconomic trends will continue to influence strategic decisions and so, too, will increasing attention to social responsibility.

“The recent introduction of the Canadian Ombudsperson for Responsible Enterprise (CORE) to enforce responsible conflicts with social communities underscores the importance of mining sustainably for the benefit of all stakeholders,” the report said.

Indeed, mining businesses have been advised to monitor the progress of Bill C-69, which proposes the creation of the Impact Assessment Agency of Canada (IAAC) to lead all impact assessments of energy and natural resource projects in Canada going forward.

If passed, the new federal legislation would fundamentally alter the regulatory landscape for project assessments.

KPMG says this potentially indicates rising uncertainty over obtaining necessary operating permits. According to the Fraser Institute’s annual report on permit times for mining exploration, 70% of respondents in 2016 indicated that the time for permit approval has lengthened in the last 10 years, and that companies are less likely to invest in a jurisdiction if they are unsure about obtaining necessary permits.

Effectively allocating scarce capital to projects is always difficult. Doing so in a volatile commodity price environment with high uncertainty regarding permitting, political, social, environmental and other factors is extremely challenging, KPMG said.

“In our experience, many mining companies are finding new ways to enhance their capital allocation process during times of uncertainty or tempered optimism. Those who are doing it best are explicitly linking capital decisions to their enterprise risk assessment process and risk appetite.

Political risk stayed flat at number seven this year. KPMG said this is surprising given the current volatility in the broader geopolitical landscape.

In its report on the top risks for 2018, the Eurasia Group, a top global political analysis firm, said if it “hadÂ  to pick one year for a big unexpected crisis – the geopolitical equivalent of the 2008 financial meltdown – it feels like 2018.”

The mining industry is no stranger to the often unpredictable effects of geopolitical risks and disruption in the global system. Companies are reliant on global commodity markets and operate around the world, often in developing countries subject to shifting political environments. Government actions such as resource nationalism, dramatically increased taxation and restrictive regulation can decimate project values in an instant.

Back in March 2017, Tanzania imposed an export ban on mined concentrates, alleging that mining companies have underpaid up to US $50 billion in taxes over the past 20 years.

The Tanzanian government is recommending that the export ban remain in place until the back taxes are paid.

It is a move that has posed significant challenges for Barrick Gold Corp. [ABX-TSX, NYSE] affiliate Acacia Mining PLC. Acacia has three producing mines in Tanzania, including Bulyanhulu, Buzwagi and North Mara.