Silver Bullet Mines Corp. [TSXV-SBMI ; OTCQB-SBMCF] is what many might consider a maverick in the mining industry, boldly going where few have gone before; from exploration to mining in a single leap. Or at least the decision to start mining the company’s Washington Mine in Idaho and Buckeye Mine in Arizona may appear to be a single leap without a resource estimate, feasibility studies or mine plans in hand, but the decisions are far more calculated than they appear at first glance.

“On the Washington Mine, we based our decision on the historical information, two field programs, a blended bulk sample yielding 55.5 ounces silver per ton, existing infrastructure, and a successful financing. We know where the silver and have internal numbers. We have an engineering team and a mine plan,” says Peter M, Clausi, Vice President Capital Markets for Silver Bullet Mines Corp.

Historically, the Washington Mine first saw gold production in the late 1800’s with reported average gold grades of one-ounce-per-ton. The mine again produced gold in the 1930’s, but the operator lacked the processing technology to produce silver, so decided to block out the silver ore with the intention of coming back and extracting the silver later, which never happened and in 1981 an Energy Services Inc. report estimated a resource of three million ounces of silver with a grade of 30 to 90 ounces per ton and 15,000 ounces of gold at 0.3 ounces per ton in-situ, just inside the adit entrance.

“Our intention is to widen the existing adit, make the area safe for work, proceed to the historical workings and extract the mineralized material. To this end we are in discussions with an experienced contract miner to start the work as soon as reasonably possible,” says Clausi.

The historical records and existing infrastructure suggest Silver Bullet Mines should be able to in the short-term extract a bulk sample of 1,500 to 3,000 tonnes of mineralized material from that blocked-out volume. After a brief pause to assess the results of the bulk sample and to inspect more of the existing infrastructure, the Company would then continue extracting material and develop a ramp to the high-grade parallel structures, identified in 1980 by then owner, Hecla Mining who completed a bulk sample of the material and reported a grade of 44 ounces of silver per tonne and 10 grams of gold per tonne. A second report included an estimate of 3 million ounces of silver with a grade of 30 to 90 ounces per ton and 15,000 ounces of gold at 0.3 ounces per ton for the veins identified on the Property at the time.

These historical observations were followed up by Silver Bullet in January 2022 with an 80-kilogram blended bulk sample from eight locations which returned 55.5 ounces-per-ton Silver, reflecting the silver grades reported historically.

Not one but two operating mines 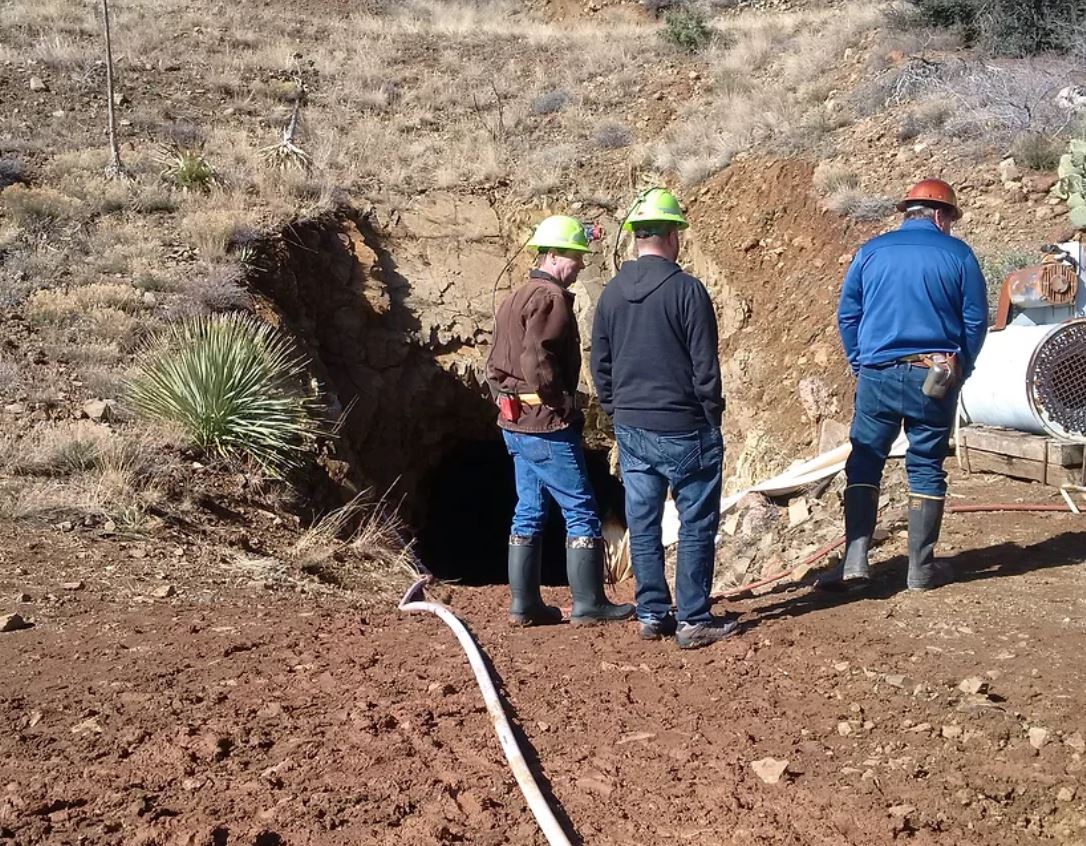 The initial target at the Buckeye has been the high-grade polymetallic drift identified in 1976 by K.C. Delise, in a Mine Shaft Survey prepared by him for International Resources and Minerals Development Company. He identified this zone as extending approximately 500 feet along strike and referred to it as the Treasure Room.

Five samples, taken from the footwall of the vein from an area covering approximately 14 to 18 inches in width, provided the following returns (in ounces of silver per ton or oz/t as well as grams per tonne or g/t):

The average of the remaining 39 samples (including 6 samples of 0.0 oz/t) is as follows:

“The assay results are exciting numbers, and they provide us with a great deal of confidence in our internal grade estimates as we move to production”, said A. John Carter, SBMI’s CEO. “As any responsible producer would, we will continuously sample and assay as we proceed.”

To date (April 4, 2022) the mill is close to completion and a two-week trial period is expected to begin shortly. During this trail period Silver Bullet Mining will move roughly 1,500 tons of lower grade or to the mill.

As it moves into production, Silver Bullet will assay daily to better enable it to determine the production head grade of the feed material and has engaged Montana Technical University to help optimize an efficient recovery process flow sheet.

“These are very exciting times for Silver Bullet Mines as we rapidly approach commencement of mining operations at the Buckeye Mine in Arizona and move simultaneously to mining in Idaho,” says Carter. “Revenue generated from both mines can fund exploration programs to attack the past-producing McMorris Mine, increase production capacity at our 100%-owned modular mill, and explore the potential for a copper porphyry at our Black Diamond Property.”

Tip of the iceberg

The Richmond Basin is the location of several historic high-grade silver-copper mines including Siler Bullets five former producers on their Black Diamond property including: McMorris, La Plata, Helena, Silver Sevens, and Buckeye. Little work or extraction came from this area since the early 20th century as the camp was more focused on big copper mines.

The plan now is to take another look at the McMorris Mine, which constitutes almost 21% of the surface area of the company’s property and produced approximately 500,000 ounces at 250 oz/ton in direct shipping ore until 1893.

First mining company in the Metaverse

Breaking new ground is not new for Silver Bullet Mines, and now as the first mining company in the Metaverse, it is leading in what could easily become the next investor frontier.

“We are the first mining company in the metaverse. If you’re looking for a younger demographic of investors you go to where they hang out, so we’ve gone to Horizon Worlds, which is Facebook’s platform in the metaverse. We built worlds there, and we’re inviting people to come visit us,” says, Peter M, Clausi, Vice President Capital Markets for Silver Bullet Mines Corp.

On the heels of a successful oversubscribed financing, Silver Bullet Mines will have near-term cash flow from its Buckeye Mine, followed closely by the Washington Mine. The funds will support the company’s efforts to continue exploration on the four past producers in the Black Diamond Property portfolio, and if all goes as planned result in positive net cash flow in the Company by the end of the year.