For years, silver bugs have been disappointed. Just when there appeared to be a price breakout imminent, a terrible thing happened – nothing.

Finally, however, there is action in the silver price with the July 29 price fixed at US$24.11 per ounce. That’s a double from US$12 an ounce in March when the COVID-19 pandemic hit. The white metal did better in the second quarter 2020 and gained 26% from April 1 to June 30. Essentially, silver has outperformed gold.

Silver is both money and an industrial metal subject to the pressures of supply and demand. According to a recent Silver Institute report, silver saw a market surplus in 2019 of 31.3 million ounces, or 973 tonnes. “The fourth surplus in a row, this only added to earlier gains in global above-ground stocks, giving a total of 254.2 million ounces, or 7,905 tonnes for the decade to 2019.” 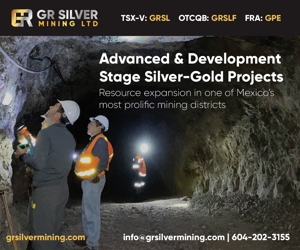 Despite this surplus, global mine production fell for the fourth consecutive year in 2019, dropping by 1.3% year over year to 836.5 million ounces, or 26,019 tonnes, according to The Silver Institute. “This was a result of declining grades at several large primary silver mines, lower silver production from copper mines and notable disruption losses at some major silver producers.”

Regarding silver usage, while photography applications continue to decline, there have been big changes to the silver market in recent years; namely, the increasing use of solar panels that now account for 10% of the metal’s supply.

On the money side, like gold, silver is a precious metal that is also influenced by uncertainty brought on by the COVID-19 pandemic, the weak US dollar, money printing, political and geopolitical strife between the US and China. With gold now selling for around US$1,900 an ounce, silver is on a free ride to the upside.

Investors are concerned that US equity markets are looking toppy and are even more concerned with the possibility of negative interest rates. Under these circumstances, where should an investor put his or her money? Many are choosing the safe havens of silver and gold in the form of coins, bars, ETFs and mining equities.

“The number one item we sell is the Gold Maple Leaf coin,” said Robert Levy of Border Gold in Surrey, British Columbia. Other big sellers include gold and silver bars and Silver Maple Leaf coins. The COVID-19 pandemic has helped to drive increased demand for precious metals as investors react to the increase in market volatility and economic uncertainty, he said.

Looking ahead, The Silver Institute Silver 2020 report stated, “We expect physical [silver] investment to enjoy strong growth. Importantly, we also believe that professional investor interest in silver will also improve considerably in the months to come, as confidence that gold is once again in a sustainable bull market grows and silver’s historical undervaluation makes it look yet more attractive.”

However, The Silver Institute concedes, “The uncertainties presented by the COVID-19 crisis make the job of forecasting silver market conditions over the rest of the year incredibly challenging. The extreme market volatility that we have seen in recent weeks is in some ways reminiscent of the 2008 global financial crisis and the recession that followed.”

Nevertheless, bullion buyers, as well as investors in silver stocks and ETFs are being rewarded. Share prices of silver producers and silver ETFs have also done well since the March low. With precious metal analysts now forecasting gold is on its way to US$2,000 an ounce, there should be plenty of wind in silver’s sails during the coming weeks.

The 100%-owned Plomosas Silver Project is at an advanced-stage undergoing resource delineation.

The Plomosas Project includes six areas with an average of 100 surface and underground drill holes in each area1, geophysical and geochemical data covering most of the concession, 16 new exploration targets from which 11 have high priority for future exploration programs. The 100%-owned assets include all facilities and infrastructure including: access roads, surface rights agreement, water use permit, 8,000 metres of underground workings, water access, 60 km of 33 KV power line, offices, shops, 120-person camp, high-speed internet, infirmary, warehouses and assay lab representing approximately US$30 million of previous capital investments. The previous owners invested approximately US$18 million in exploration.

GR Silver Mining’s other projects are situated in areas attractive for future discoveries and development in the same vicinity of Plomosas and San Marcial in the Rosario Mining District.

1The Plomosas Silver Project has more than 500 recent and historical drill holes in six areas – Plomosas Mine, San Juan, La Colorada, Yecora, San Francisco and El Saltito. These drill holes represent an extensive database allowing the company to advance towards resource estimation and potential project development in the near future.Recently released assays from holes drilled by previous companies highlight continuity of high-grade silver mineralized zones in a 100-metre step-out from a previously released section of drill hole results at the San Juan Area at Plomosas. The drill results confirm high-grade mineralization extending south towards the San Francisco Area, suggesting potential to outline a large low sulphidation epithermal system with at least a 1,000-metre strike length and 400 metres down dip.

Rehabilitation of the historical San Juan underground workings is underway.