Drill Hole ET-21-264 has returned the highest metal grades to date drilled by Silver Tiger at El Tigre as detailed in the table below:

Results for the first 13 drill holes, totaling 3,422.5 meters, drilled on five sections over a 100 meter strike length of the 1,000 meter long Seitz Kelly Vein are presented in the attached Drill Hole Results table. The drill results are uncut and undiluted, unless indicated otherwise.

The Seitz Kelly Vein was the eastern most of the 3 high grade silver veins at the Historic El Tigre Mine which is reported to have produced a total of 353,000 ounces of gold and 67,400,000 ounces of silver from 1.87 million tonnes (Craig, 2012) at an average grade of approximately 2 kg of silver equivalent per tonne between 1908 and 1930.Â  The development of the Seitz Kelly Vein began in the later period of the El Tigre mine life.Â  The mine ceased operations in 1930 only due to economic factors caused by the onset of the Great Depression when the price of silver declined to less than 20Â¢ per ounce.

The historical underground workings on the Seitz Kelly vein extended over a strike length of 1,000 meters on 11 working levels. Geological and assay plan maps from the original operations were recovered from the Anaconda Collection archives at the University of Wyoming. A total of 5,301 underground channel samples with gold and silver assays in the Seitz Kelly workings (levels, raises, winzes, crosscuts) were digitized and plotted.

Mining on the upper levels of the Seitz Kelly vein was advanced to Section 5500N but only to 5100N on Level 6 and 5000N on Level 7 below the Espuelas Canyon (see Sooy and Seitz Kelly Vein Plan Map) when the mine shut down in 1930. Both drifts were advancing to the north in high grade ore. The drill holes were spotted to test below the Level 6 and 7 workings in this area. Drilling started in June 2021 on Section 4975, with 15 holes totaling 3,422.5 meters completed to date. Two drill rigs are working on Sections spaced at 25m intervals along strike.

Silver Tigerâ€™s CEO, Glenn Jessome, stated, â€œWhile drilling the high-grade silver veins at El Tigre in 2021 we have made a number of very important discoveries. We first discovered in the footwall zone of the Sooy Vein a new style of mineralization in the black shale that Â the technical team have named the crackle breccia. This discovery prompted the technical team to be cognizant of this potentially new high-grade mineralization outside of the traditionally targeted quartz silver veins.â€ Jessome continued, â€œWe have now discovered high-grade mineralization in the first holes we have drilled on the Seitz Kelly Vein, highlighted by a drill intercept of 82 kg silver equivalent in an area where the previous historic miners were in the process of developing and preparing to mine when they were suddenly forced to cease mining Â in 1930 with the onset of the Great Depression.â€

Plan Map of the Seitz Kelly Vein and Sooy Vein 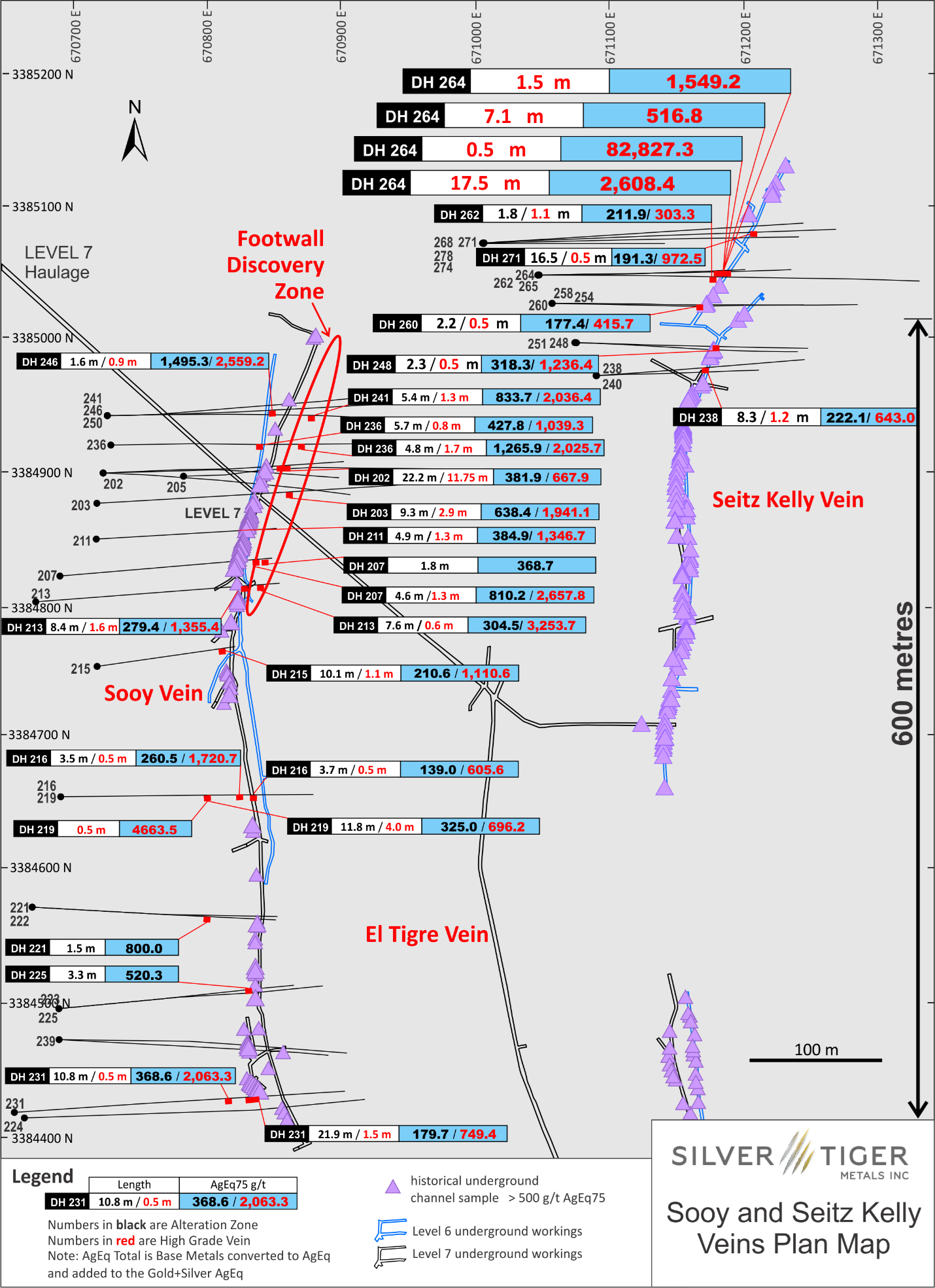 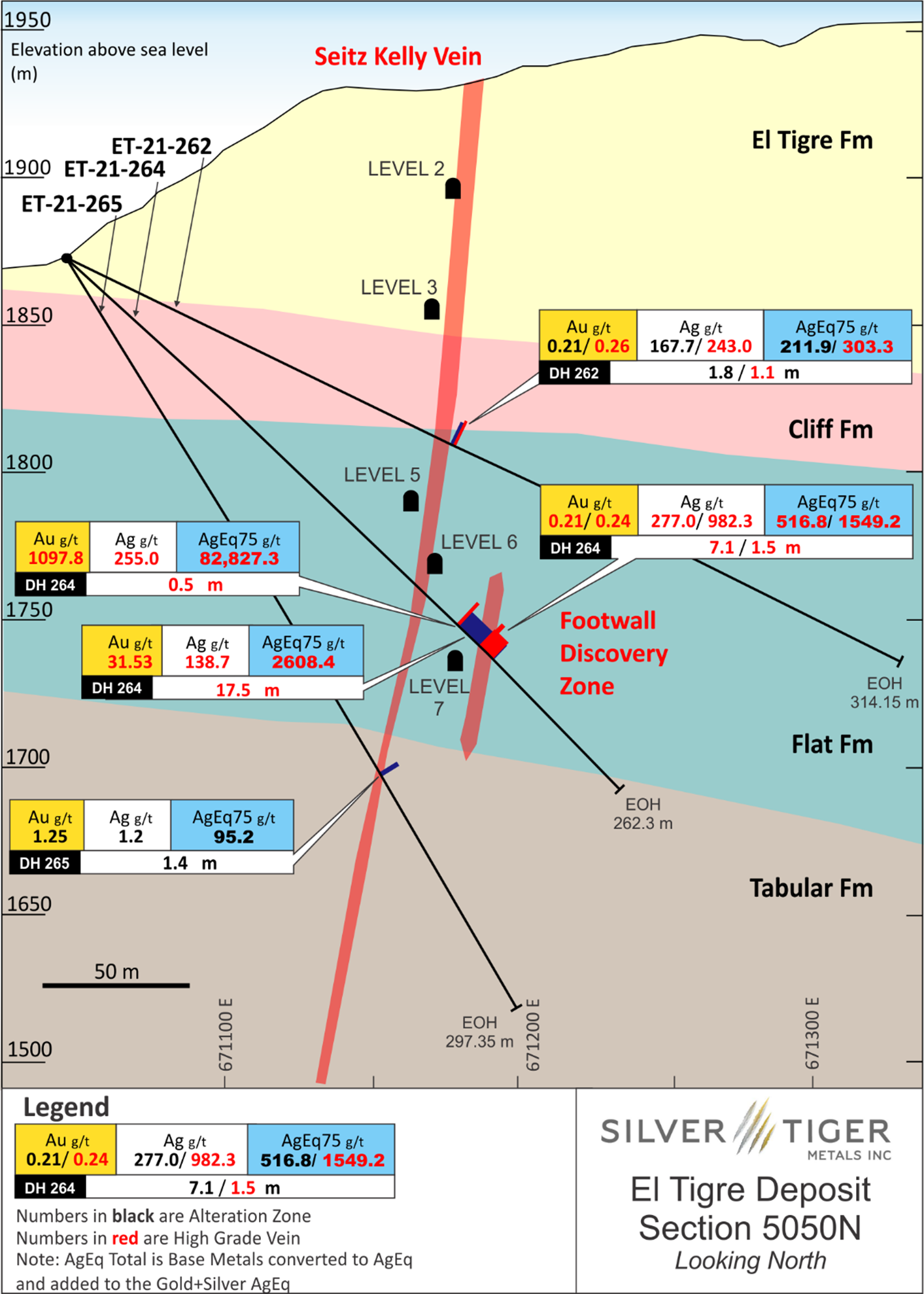 Plan Map of 4.2 Kilometers of the El Tigre Veins and Drill Holes 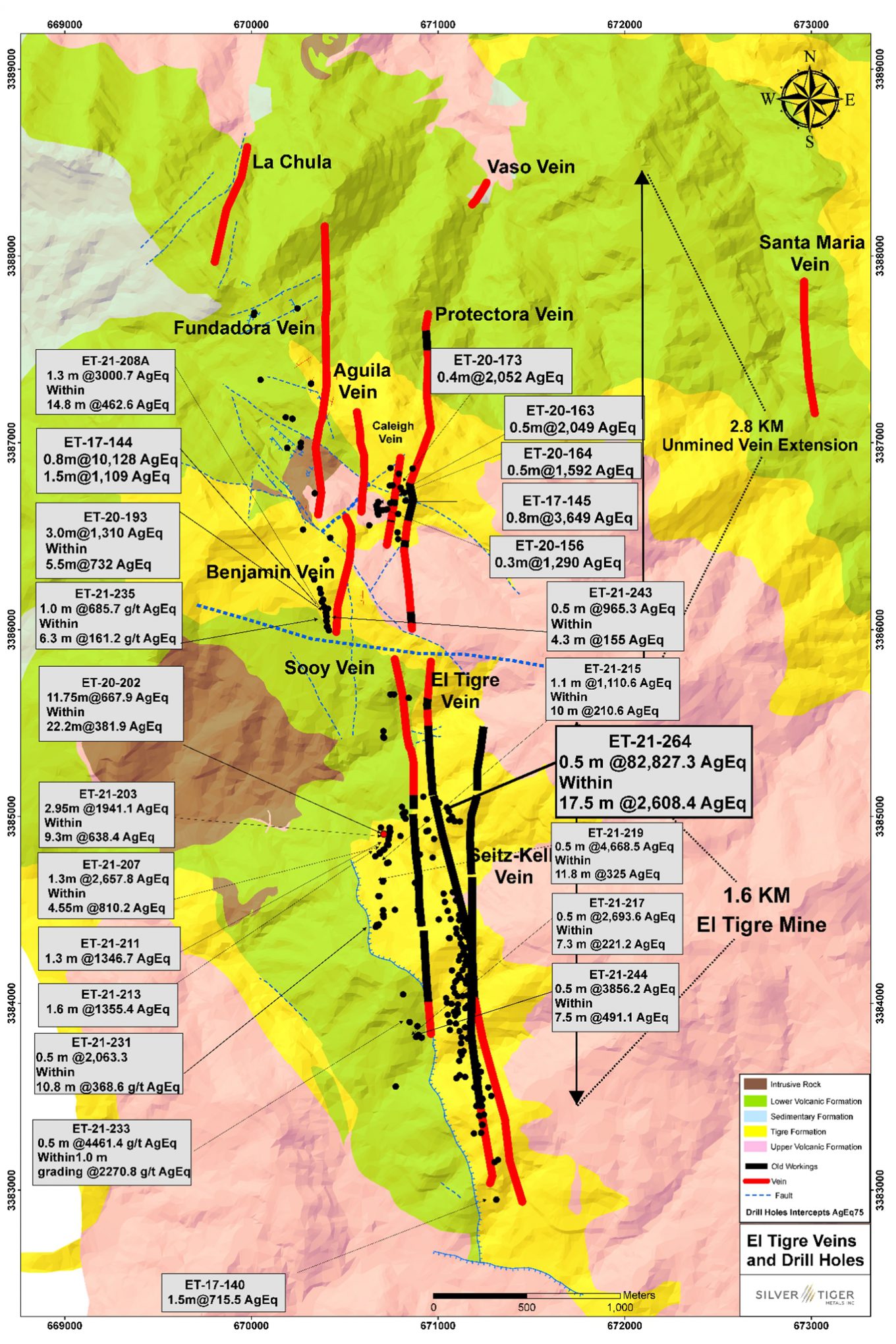 About the El Tigre Historic Mine District

The El Tigre historic mine district is located in Sonora, Mexico and lies at the northern end of the Sierra Madre silver and gold belt which hosts many epithermal silver and gold deposits, including Dolores, Santa Elena and Las Chispas at the northern end.Â  In 1896, gold was first discovered on the property in the Gold Hill area and mining started with the Brown Shaft in 1903.Â  The focus soon changed to mining high-grade silver veins in the area with production coming from 3 parallel veins the El Tigre Vein, the Seitz Kelley Vein and the Sooy Vein.Â  Underground mining on the middle El Tigre vein extended 1,450 meters along strike and was mined on 14 levels to a depth of approximately 450 meters.Â  The Seitz Kelley Vein was developed along strike for 1 kilometer to a depth of approximately 150 meters.Â  The Sooy Vein was only mined along strike for 250 meters to a depth of approximately 150 meters.Â  Mining abruptly stopped on all 3 of these veins when the price of silver collapsed to less than 20Â¢ per ounce with the onset of the Great Depression.Â  By the time the mine closed in 1932, it is reported to have produced a total of 353,000 ounces of gold and 67.4 million ounces of silver from 1.87 million tons (Craig, 2012).Â  The average grade mined during this period was approximately 2 kilograms silver equivalent per ton.

The El Tigre silver and gold deposit is related to a series of high-grade epithermal veins controlled by a north-south trending structure cutting across the andesitic and rhyolitic tuffs of the Sierra Madre Volcanic Complex within a broad silver and gold mineralized prophylitic alteration zone developed in the El Tigre Formation that can be up to 150 meters wide. The veins dip steeply to the west and are typically 0.5 meter wide but locally can be up to 5 meters in width. The veins, structures and mineralized zones outcrop on surface and have been traced for 5.3 kilometers along strike in our brownfield exploration area.Â  Historical mining and exploration activities focused on a 1.6 kilometer portion of the southern end of the deposits, principally on the El Tigre, Seitz Kelly and Sooy veins. The under explored Caleigh, Benjamin, Protectora and the Fundadora exposed veins continue north for more than 3 kilometers.Â  Silver Tiger has delivered its maiden 43-101 compliant resource estimate and is currently drilling to update its resource estimate and publish a PEA.

VRIFY is a platform being used by companies to communicate with investors using 360Â° virtual tours of remote mining assets, 3D models and interactive presentations. VRIFY can be accessed by website and with the VRIFY iOS and Android apps.

The VRIFY Slide Deck and 3D Presentation for Silver Tiger Metals Inc. can be viewed at: https://vrify.com/explore/decks/492 and on the Corporationâ€™s website at:Â  www.silvertigermetals.com.

Quality assurance and quality control (“QA/QC”) procedures monitor the chain-of-custody of the samples and includes the systematic insertion and monitoring of appropriate reference materials (certified standards, blanks and duplicates) into the sample strings. The results of the assaying of the QA/QC material included in each batch are tracked to ensure the integrity of the assay data.Â  All results stated in this announcement have passed Silver Tigerâ€™s QA/QC protocols.

David R. Duncan, P. Geo., V.P. Exploration of the Corporation, is the Qualified Person for Silver Tiger as defined under National Instrument 43-101.Â  Mr. Duncan has reviewed and approved the scientific and technical information in this press release.

This News Release includes certain â€œforward-looking statementsâ€.Â  All statements other than statements of historical fact included in this release, including, without limitation, statements regarding potential mineralization, resources and reserves, the ability to convert inferred resources to indicated resources, the ability to complete future drilling programs and infill sampling, the ability to extend resource blocks, the similarity of mineralization at El Tigre to Delores, Santa Elena and Chispas, exploration results, and future plans and objectives of Silver Tiger, are forward-looking statements that involve various risks and uncertainties. Forward-looking statements are frequently characterized by words such as â€œmayâ€, â€œis expected toâ€, â€œanticipatesâ€, â€œestimatesâ€, â€œintendsâ€, â€œplansâ€, â€œprojectionâ€, â€œcouldâ€, â€œvisionâ€, â€œgoalsâ€, â€œobjectiveâ€ and â€œoutlookâ€ and other similar words. Although Silver Tiger believes the expectations expressed in such forward-looking statements are based on reasonable assumptions, there can be no assurance that such statements will prove to be accurate and actual results and future events could differ materially from those anticipated in such statements.Â  Important factors that could cause actual results to differ materially from Silver Tigerâ€™s expectations include risks and uncertainties related to exploration, development, operations, commodity prices and global financial volatility, risk and uncertainties of operating in a foreign jurisdiction as well as additional risks described from time to time in the filings made by Silver Tiger with securities regulators.