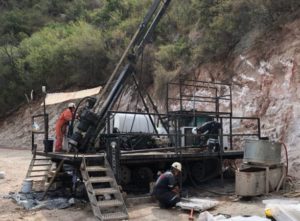 SilverCrest Metals Inc. (TSX‐V: SIL – OTCQX: SVCMF) is pleased to announce its first set of Phase III drill results for the Las Chispas Property located in Sonora, Mexico. Step out drilling of the Babicanora Vein, including Area 51, continues to intersect high‐grade mineralization (see Figures). There are now 23 identified epithermal veins on the Property (previously reported as 19 veins). Of the 23 veins, the Company has only drilled tested nine of these veins, which are the Babicanora, Babicanora Footwall, Las Chispas, Giovanni, La Blanquita, William Tell, Varela, Granaditas and Amethyst veins. Only five of these nine drilled tested veins have been included in the recently announced maiden resources (refer to the Company’s news release dated February 26, 2018).

Eric Fier, CPG, P.Eng, and CEO, remarked, “Our initial Phase III drill holes in the Babicanora Vein continue to intercept high‐ grade precious metal mineralization along a drill‐tested strike length of 1.5 kilometres. The drill results from the southeast extension of the Babicanora Vein, known as Area 51, show further bonanza grades1, with increased size of the high‐grade footprint. For H1 2018, we will continue expansion drilling of the Babicanora Vein, initial holes into Babi Sur Vein, and additional holes into the Las Chispas, Amethyst, Granaditas and other veins. We are systematically drilling only step out expansion holes and working towards an updated resource for Q3 2018.”

Drill holes BA18‐66, 67, 69, 71, 73, 76, 78, 79, and 80 intercepted anomalous mineralization, but are below the Company’s 150 gpt AgEq cutoff. Holes BA18‐68, 70, 77, and 81 intercepted grades greater than 1,000 gpt AgEq, consisting of acanthite, argentite, electrum, native silver and visible gold. Holes BA18‐66, 67, and 68 were included in the Company’s maiden resource estimate dated February 26, 2018. Hole BA18‐75 deviated and did not intercept intended target. Holes BA18‐67, 71, 73 and 79 showed elevated lead, zinc and copper (including precious metals) with possible transition to increased base metals to depth and southeast along the strike of the Babicanora Vein. Further core review, sampling and assaying is underway on holes southeast and to depth of Area 51 to determine boundaries for potential base metal transition. Results for this review are pending. Drill success rate for the Babicanora Vein to date is approximately 70% of intercepts in the high‐grade footprint.

The Company commenced Phase III exploration program for further step‐out drilling at the Babicanora Vein, including Area 51, and initial drilling on several other veins in the district. An additional 15,000 to 20,000 metres of drilling are planned by Q3 2018. Other ongoing site work includes continued underground mapping and sampling on the Las Chispas Vein, drilling test wells for site water, permitting work, and a review of the maiden resource model for optimization and update.

The Company’s maiden resource report for the estimate announced on February 26, 2018 will be filed on SEDAR later this week.

The Qualified Person under National Instrument 43‐101 Standards of Disclosure for Mineral Projects for this news release is N. Eric Fier, CPG, P.Eng, and CEO for SilverCrest, who has reviewed and approved its contents.