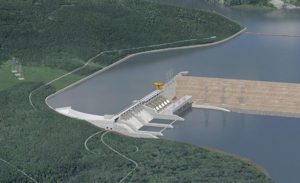 It has been just over one year since construction began on the Site C hydroelectric dam and generating station in northeast British Columbia. Recently, the project was granted two key permits that not only allow the mega project to proceed, they demonstrate the Liberal Government’s support of the project. This has come as a bit of surprise to some who expected that First Nations and environmentalists might have the power to stall or even stop construction of the dam.

Like any large resource project, it has its opponents. Construction of the dam will flood an 80 km long valley. In July, hundreds of protesters gathered in a Vancouver park. A protest group, Fight C, said that not only does the dam infringe of First Nations’ rights, it is a waste of tax payer money. Until the valley is flooded some protesters feel that it is not too late to put on the brakes.

In contrast, also in July, the Liberal Government granted two crucial federal permits for Site C. The permits were issued by the Department of Fisheries and Oceans and Transport Canada. This angered many opposed to the project as they felt that, in the light of recent court rulings and Trudeau’s very public support for First Nations and the protection of the environment, he and the courts might be on their side.

According to an August 3, Global News article What Trudeau’s Site C decision could mean for future energy projects, by Keith Baldrey, “The Trudeau government is already feeling a backlash from environmentalists and some First Nations, who are furious he has given the green light to a project they vehemently oppose. Words like ‘betrayal’ and ‘cowardly’ are now being bandied about by various groups who apparently had convinced themselves that Trudeau was going to shut down any economic development that had even the slightest amount of opposition from some First Nations.”

On the other hand, the project, according to a province wide Abacus Data poll, has the support of a large majority of BC residents.

Construction continues at the project despite the controversy surrounding it. So, just what has been accomplished since construction of the project began a year ago? A recent update by the Office of the Premier, Christy Clark, included a list of highlights that illustrate the scope of the project.

Key highlights of the first year of Site C construction include:

It is expected that once construction is complete, in 2024, the dam will provide electricity for more than 100 years.