Skyharbour Resources Ltd. (TSX-V: SYH) (OTCQB: SYHBF) (Frankfurt: SC1P) (â€œSkyharbourâ€ or the â€œCompanyâ€), is pleased to announce that it has entered into an option agreement (the â€œOption Agreementâ€) with Medaro Mining Corp. (CSE: MEDA) (â€œMedaro or the â€œOptioneeâ€) which provides Medaro an earn-in option to acquire an initial 70% interest and up to a 100% interest in the Yurchison Uranium Property located in the Wollaston Domain of Northern Saskatchewan, Canada (the â€œPropertyâ€). The Property contains twelve (12) mineral claims, comprising approximately 55,934 hectares. 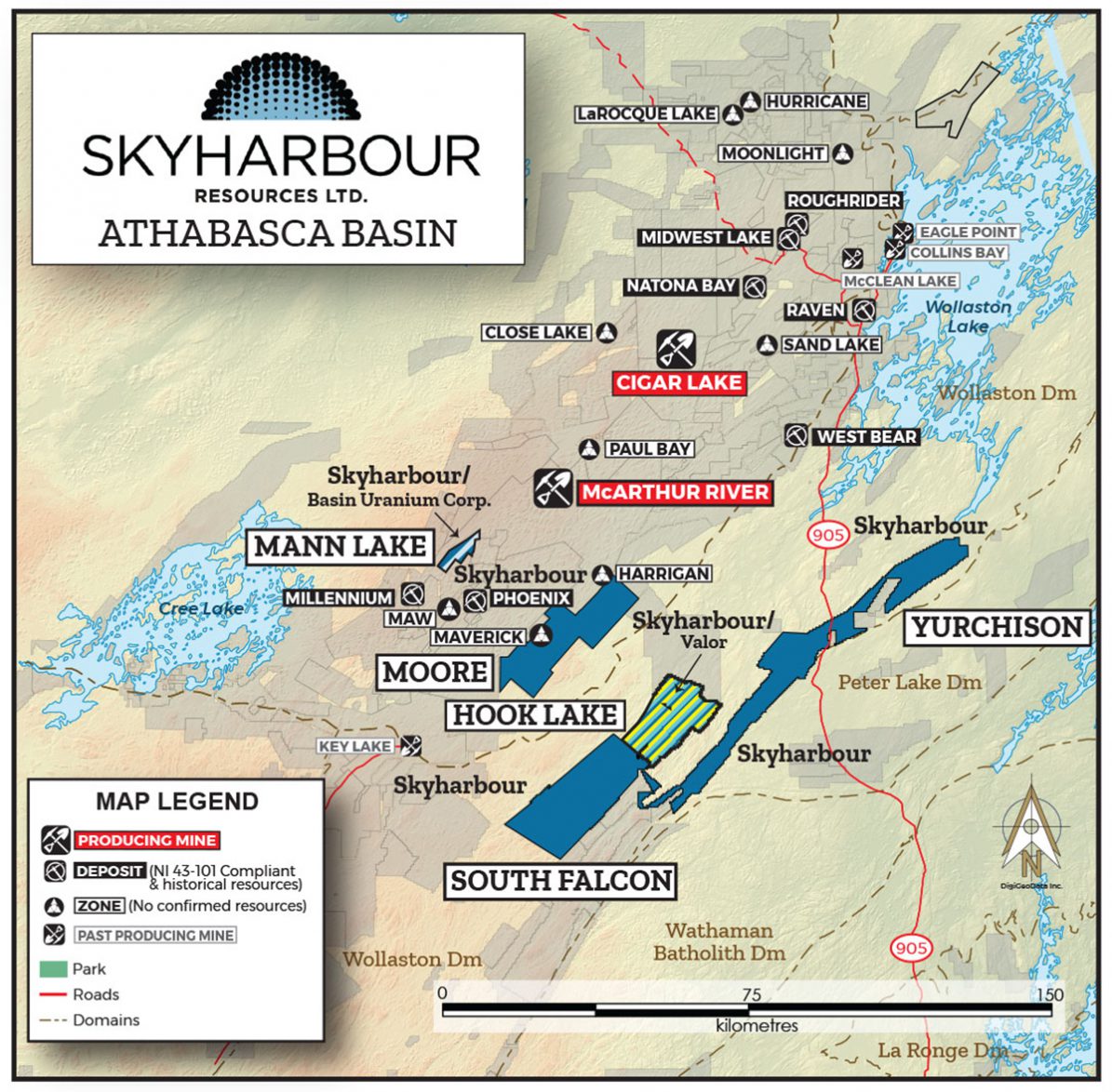 Historical prospecting near old trenches returned significant uranium (ranging from 0.09% to 0.30% U3O8) and molybdenum (ranging from 2,500 ppm to 6,400 ppm Mo) mineralization in both outcrop and float samples. Two historical holes drilled beneath the trenches returned highly anomalous molybdenum values, up to 3,750 ppm and anomalous uranium values up to 240 ppm. The Property boasts strong discovery potential for both basement hosted uranium mineralization as well as copper, zinc, and molybdenum mineralization. Regionally, Rio Tinto entered into a $30 million, seven-year, option agreement with Forum Energy Metals Corp. to acquire an 80% stake in their Janice Lake property which is located on-strike to the southwest of the Property.

Pursuant to the Agreement, Medaro may acquire an initial 70% interest in the Property by (i) issuing common shares of Medaro (â€œSharesâ€) having an aggregate value of CAD $3,000,000; (ii) making aggregate cash payments of CAD $800,000; and (iii) incurring an aggregate of CAD $5,000,000 in exploration expenditures on the Property over a three year period.

Schedule to earn an initial 70% interest:

Jordan Trimble, President and CEO of Skyharbour, stated: â€œWe look forward to working with the Medaro team at the Yurchison Project having just signed this Option Agreement. With another accretive property transaction announced, we continue to execute on our business model by adding value to our project base in the Athabasca Basin through strategic partnerships and prospect generation, as well as focused mineral exploration at our flagship Moore Uranium Project. News will be forthcoming on exploration plans at Yurchison and Medaro is well positioned to advance the Project with a strong management and technical team as well as a healthy treasury.â€

The technical information in this news release has been prepared in accordance with the Canadian regulatory requirements set out in National Instrument 43-101 and reviewed and approved by Richard Kusmirski, P.Geo., M.Sc., Skyharbourâ€™s Head Technical Advisor and a Director, as well as a Qualified Person.

Medaro Mining is a lithium and uranium exploration company based in Vancouver, BC, which holds options on the Superb Lake lithium property located in Thunder Bay, Ontario, the Cyr South lithium property located in James Bay, Quebec, and the Yurchison uranium property in Northern Saskatchewan. The Company is also involved in the development and commercialization of a new process to extract lithium from spodumene concentrate through its Global Lithium Extraction Technologies joint venture.

Skyharbour holds an extensive portfolio of uranium exploration projects in Canada’s Athabasca Basin and is well positioned to benefit from improving uranium market fundamentals with six drill-ready projects covering over 250,000 hectares of land. Skyharbour has acquired from Denison Mines, a large strategic shareholder of the Company, a 100% interest in the Moore Uranium Project which is located 15 kilometres east of Denison’s Wheeler River project and 39 kilometres south of Cameco’s McArthur River uranium mine. Moore is an advanced stage uranium exploration property with high grade uranium mineralization at the Maverick Zone that returned drill results of up to 6.0% U3O8Â over 5.9 metres including 20.8% U3O8Â over 1.5 metres at a vertical depth of 265 metres. The Company is actively advancing the project through drill programs.