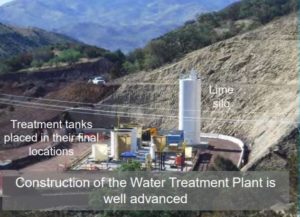 Arizona Mining Inc. [AZ-TSX; WLDVF-OTC] on Monday June 18 issued a joint press release with Australian company South32 Ltd. [S32-ASX, JSE, LSE; SOUHY-ADR) saying it has reached a friendly agreement with South32 Ltd. Under the agreement, South32 will acquire the 83% stake in Arizona Mining that it does not already own via a plan of arrangement, comprised of an all cash offer worth $1.8 billion.

The offer price of $6.20 per share represents a 50% premium on the closing price of Arizona shares on June 15, 2018, and implies a total equity value for Arizona mining of $2.1 billion, the companies said.

Directors and officers of Arizona Mining, holding 34% of the companyâ€™s common shares, have agreed to back the deal and have unanimously recommended to shareholders that they vote in favour of the transaction.

Arizona Miningâ€™s key assets include the Hermosa Project and the high-grade Taylor base metals deposit in Arizona. The companyâ€™s other project on the Hermosa property is the Central deposit, a silver-manganese manto-style oxide project.

The offer for Arizona is the largest in the Canadian metals and mining sector so far this year.

â€œOur all-cash offer for Arizona Mining will allow us to optimise the design and development of one of the most exciting base metal projects in the industry,â€ said South32 CEO Graham Kerr .

The Hermosa property is located about 80 km southeast of Tucson, about 13 km north of the U.S. border with Mexico. Located 1,600 metres above sea level, the property hosts two stratigraphically-controlled mineral deposits, the Taylor Deposit and Central Deposit.

News of the takeover offer comes after Arizona recently announced more drilling results from a program that has focused on expansion of the Trench Vein System, Taylor Sulfide Zone and Taylor Deeps Zone. The company said the results were part of a 55,000-metre infill and step-out drilling program that will be included in the feasibility study, marking the next key step after a Preliminary Economic Assessment update (PEA) was released on January 16, 2018.

Based on the updated PEA, the company has said it continues to target first mineralized material-to-plant from a proposed 10,000 ton-per-day operation in 2020.

In connection with the transaction, South32 said it will provide Arizona Mining with a $70 million working capital facility at commercial rates. In certain circumstances, the facility can be repaid in Arizona shares at South32â€™s election, but only to the extent South32â€™s ownership of Arizona Mining does not exceed 19.9%.