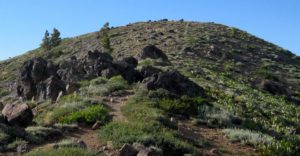 Sunvest Minerals Corp. (TSX-V: SSS) announces it has begun organizing a geophysical program on the Company’s 100% owned Brazil Lake Cobalt property (AKA “Foster”), located in the Sudbury Mining District in north central Ontario. A previous site visit by Company personnel had garnered a grab sample result which returned 1.47% Co and 1.73 g/t Au, as well as anomalous values in Nickel (0.5 %) and Palladium (0.436 ppm). This sample was taken on the quartz-carbonate vein wall and is also characterized with high arsenic content (4.58%).

During the previous site visit (fall 2016) it was noted that the area is underlain by the calcareous siltstone and limestone of the Espanola Formation and a Nipissing-type gabbro body (Card 1984). The Brazil Lake mineralised occurrence, which consists of cobaltite, pyrrhotite and chalcopyrite is hosted in a quartz-carbonate vein located at the contact between the hornfels calcareous unit and the intruded metamorphosed gabbro. The vein is 12 m wide and can be followed over several hundreds of meters. Pyrrhotite and chalcopyrite are mostly found within the vein, whereas cobaltite is found along the walls of the vein, in association with actinolite an amphibolite mineral.

At the site of the vein, an adit of about 28 m long has been driven into a hill and a large rock dump exists at the mouth of the adit. Above the adit, the quartz vein cutting gabbroic rock and containing massive blocks of sulphides (pyrrhotine, chalcopyrite and pyrite) is exposed in an historic trench. Please visit the website for further information on Brazil Lake.

Sunvest Chief Executive Officer, Mike England commented, “We acquired the Brazil Lake Cobalt project in 2016 and while we have been busy with other quality projects in our portfolio cobalt has become an increasingly hot commodity. In the best interests of our shareholders management felt this to be an appropriate time to turn some attention to this quality project. The demand for cobalt deposits is expected to significantly increase to battery applications to feed EV’s (electric vehicles), electronic devices, and energy storage units (such as Tesla’s Powerwall Units), definitely time to further investigate the geophysical targets that were delineated by Argosy Minerals in 20062.”