Taiga Gold Corp [CSE:”TGC“] (“Taiga”) has received a report from SGO Mining Inc., a wholly-owned subsidiary of SSR Mining Inc. (“SSRM”) [TSX: SSRM;NASDAQ: SSRM] containing complete analytical results from 2020 drilling on the Fisher Property located 125km east of La Ronge, Saskatchewan. The property is contiguous to the north, south and east with SSRM’s Seabee Gold Operation. The property is owned and operated by the Fisher Joint Venture (“Fisher JV”), comprised of 80% ownership by SSRM and 20% by TGC.

Drilling was carried out in two phases completed during 2020Q1 and 2020Q4 and was financed by SSR while under option from Taiga (prior to formation of the Fisher JV). 37 holes were completed in 2020 for a total 12,976m (42,561′). Four showing areas were tested during the program, with significant high-grade mineralization discovered in four separate areas and visible gold reported in seven holes. Continuous, high-grade mineralization was delineated at the Mac North area, which is now considered a resource definition target by the Fisher JV. Significant results (>1 g/t Au) were reported in 58 separate sample intervals in 21 holes from the Mac North, Mac North Hanging Wall, CGR West and Yin showing areas, with highlights summarized below.

Since optioning the Fisher Property in 2016, SSRM has completed extensive systematic exploration including prospecting, soil geochemical sampling, detailed geological mapping, geophysical surveys and completed a total of 34,583m (113,461′) of drilling in 87 holes for expenditures totalling over CDN$12,000,000, resulting in over 15,000 individual core samples. In addition, SSRM has made cash payments to Taiga and predecessor Eagle Plains Resources of CDN$3,800,000. 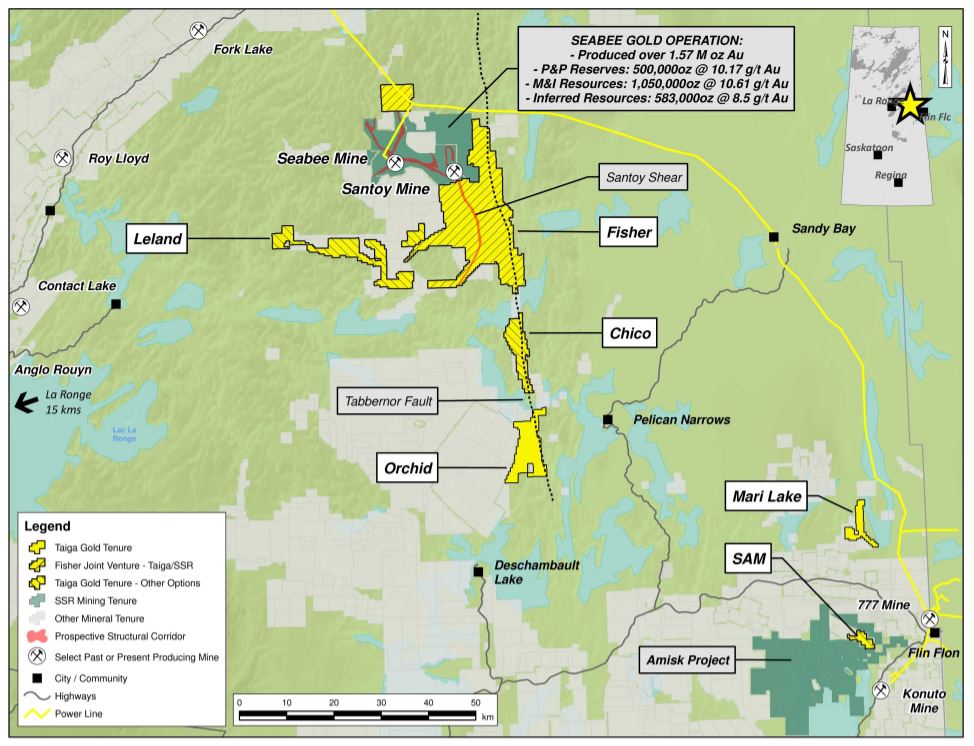 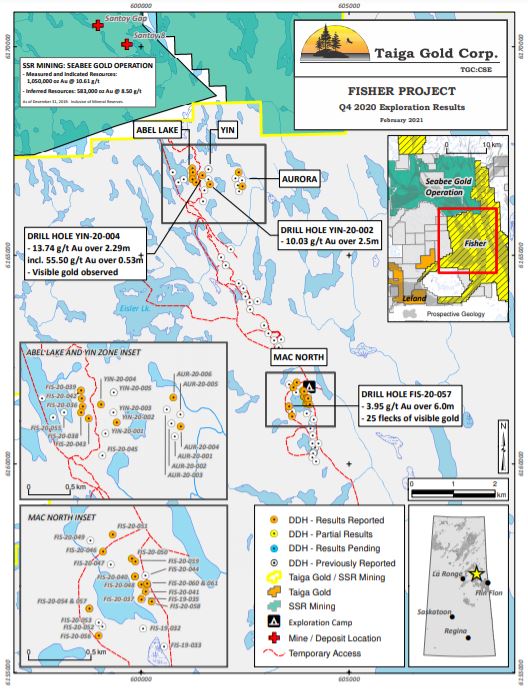 Listen to a debrief of this news release by Tim Termuende, Taiga Gold President and CEO here

SSRM reported $3.24 million in exploration expenditures on the Fisher Property in 2020 with programs designed to target a mineral resource discovery. 2021 goals for the program are to complete resource definition drilling, further testing of areas of known mineralization and to further identify drill targets for testing evolving models in a structural setting similar to that observed at the nearby producing Santoy mine.

Partial results for the 2020 drill program have been previously released. Summarized intercepts for unreleased drillholes are reported below, with additional analytical data available on the Taiga website. Analytical results range from trace values to the following: 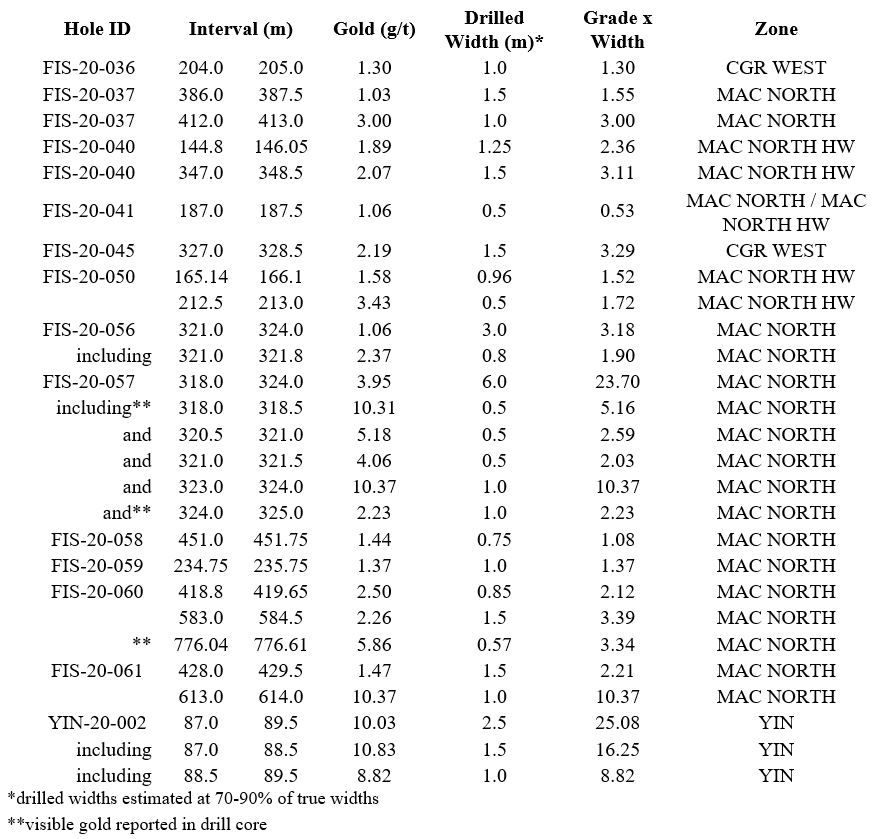 At the Central Granodiorite West 7 holes for 1,789.5m (5,870′) were completed, targeting quartz veins and shearing focused near the contact between mafic volcanic rocks and a regional-scale granodiorite. The mafic volcanic rocks lie within the overall structural corridor related to the Santoy shear. The 2020 drilling followed up on an intersection of 2.81 g/t Au over 0.57 m in FIS-18-003. The best intercept encountered in 2020 was in FIS-20-042 which returned 12.13 g/t Au over 1.50 m (previously reported)

Tim Termuende, P.Geo., President and CEO of Taiga commented recently on the results: “We are excited by the recent formation of the Fisher JV with SSR and pleased to see significant discoveries made on the property by the SSRM exploration team. Consistent high-grade mineralization discovered at the Mac North Zone confirms the potential of the Santoy shear and bodes well for further exploration and resource development throughout the large, relatively unexplored property area. We look forward to actively participating in future exploration of the property.”

Since 1991, the Seabee Gold Operation has produced over 1.57 million ounces of gold from the Seabee and Santoy deposits. In 2019, the Seabee Gold Operation produced 112,137 ounces of gold at cash costs of US$464 per ounce with an average mill-feed grade of 9.56 g/t., the fourth consecutive annual production record, with 2020 Q1 production of 29,521 ounces. SSR Mining has reported uncut drill intercepts grading up to 1,004 g/t Au over 1.6m, including 3,887 g/t gold over 0.4m (true widths) along the Santoy Shear in an area located approximately 3km northwest of the Fisher boundary (source: SSR Mining Website May 07, 2020). Management cautions that past results or discoveries on proximate land are not necessarily indicative of the results that may be achieved on the subject properties.Â

Samples collected for assay from diamond drill core are sent to TSL Laboratories in Saskatoon, SK for analyses. The drill core is split and half of the core is retained. The assay lab implements internal analytical quality control measures consisting of inserting gold control samples (blanks, certified reference material and field and pulp duplicates) in all sample batches submitted for assaying. SSRM inserts standards approximately every 20 samples, as well as two pulp duplicates and one geological blank in every batch with FA/AA work, and three pulp duplicates for FA/Gravimetric work.

Charles C. Downie, P.Geo., a “qualified person” for the purposes of National Instrument 43-101 – Standards of Disclosure for Mineral Projects, and a Director of Taiga Gold Corp., has reviewed and approved the scientific and technical disclosure in the news release.

Drilling continues on Taiga’s Leland Project, under option to and funded by SKRR Exploration (CSE:”SKRR“) which may earn up to a 75% interest in the property (see details, TGC news release dated January 26th, 2021). To date, 7 holes have been completed for a total of 1217m. The property is located 23 kilometers southwest of SSR Mining’s Seabee Gold Operation, within the Trans Hudson Corridor of east-central Saskatchewan. Drilling is expected to continue until later this week, with results made available once they have been received, compiled and interpreted.

Taiga Gold Corp. was created in 2018 through a plan of arrangement with Eagle Plains Resources Ltd. and owns 6 projects targeting gold located within the Trans Hudson Corridor in the area near the Seabee Gold Operation, owned and operated by SSR Mining.Â  Taiga’s flagship Fisher property is currently being explored by the Fisher JV, which is owned 20% by Taiga. Taiga also owns a 2.5% NSR over the majority of the Fisher property area, which includes a $100,000 annual advance royalty payable to Taiga. Taiga’s 100%-owned Leland, Chico and SAM properties are currently under option to partners SKRR Exploration, Aben Resources and DJ1 Capital, respectively.Â  Taiga continues to advance its 100%-owned Orchid and Mari Lake projects.

Taiga’s objective is to focus on the exploration and development of its gold projects located adjacent to the Seabee Gold Operation and along the Tabbernor Fault structure in eastern Saskatchewan, a highly prospective mining jurisdiction which was recently recognized by the Fraser Institute as one of the best places in the world in terms of Investment Attractiveness.Â  Throughout the exploration and development process, our mission is to help maintain prosperous communities by exploring for and discovering resource opportunities while building lasting relationships through honest and respectful business practices.Â

For further information on TGC, please contact Mike Labach at

Neither the CSE nor any other regulatory body has reviewed or approved the contents of this news release. This news release may contain forward-looking statements including but not limited to comments regarding the timing and content of upcoming financings, work programs, geological interpretations, receipt of property titles, potential mineral recovery processes, etc. Forward-looking statements address future events and conditions and therefore, involve inherent risks and uncertainties. Actual results may differ materially from those currently anticipated in such statements.