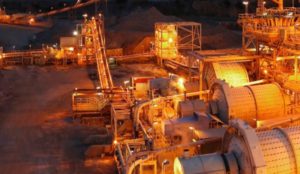 It said the measured and indicated resource is up 33% to 2.4 million ounces.

With a clear focus on West Africa Teranga Gold Corp. [TGZ-TSX] has positioned itself as a rare growth story in a challenging precious metals environment.

Teranga is taking a long term approach with the aim of building the company into a mid-tier gold producer with annual production in the 500,000 ounces range.

The foundation for that growth is the Sabodalo gold mine in Senegal, which is expected to produce between 210,000 and 225,000 ounces of gold this year.

With Sabodala on track to produce a minimum of 200,000 ounces through at least 2022, Teranga is working to develop the Wahgnion gold mine in Burkina Faso.

Teranga owns 90% of the project. The other 10% is held by the Burkina Faso government.

Based on the results of a feasibility study that was announced in early September, 2017, Wahgnion was estimated to contain 1.8 million ounces of contained gold ounces.

“[Wahgnion] will diversify our production base and add significant scale by increasing our consolidated annual gold production by 50% to between 300,000 and 350,000 ounces,” Teranga President and CEO Richard Young said recently. The first gold pour is expected by the end of 2019.

In keeping with that goal, the company moved to improve the project’s economics by completing an infill drill program of 75,000 metres in 2017. The aim was to convert inferred resources to reserves.

Based on results of that drilling, the updated measured and indicated mineral resource now stands at 50.5 million tonnes at a grade of 1.51 g/t or 2.4 million ounces of contained gold.

That marks a 33% from the previous estimate, the company said in a press release.

“Based on these excellent results, we are targeting a conversion rate of more than 50% of the additional 600,000 ounces of mineral resources into reserves, exceeding our guidance range of between 175,000 and 350,000 ounces of gold,” Young said.

The company also has high hopes for its Golden Hill project in southwest Burkina Faso, which is located on the Hounde Greenstone Belt, on exploration permits covering 468 square kilometres.

Under an agreement with Australian company Boss Resources Ltd. [BOE-ASX], Teranga gained the right to earn an 80% interest in the project by delivering a feasibility study and paying $2.5 million Australian dollars.

Young has attributed the company’s success to a strategy that has put responsible mining at the core of the decision making progress at the company’s flagship Sabodala gold mine in Senegal.