Stoicism tends to get more popular in time of stress and uncertainty. I don’t want to be overly philosophical; however, the quote below is worth considering in this time of health and economic issues that have hit hard.

It was written by the Stoic philosopher Epictetus, who was born a slave and was well versed in adversity. He said: “Every difficulty in life presents us with an opportunity to turn inward and to invoke our own inner resources. The trails we endure can and should introduce us to our strengths. Prudent people look beyond the incident itself and seek to form the habit of putting it to good use. On the occasion of an accidental event, don’t just react in a haphazard fashion: remember to turn inward and ask what resources you have for dealing with it. Dig deeply. You possess strengths you might not realize you have. Find the right one. Use it.”

I bring this up because the world has been struggling with adversity since the beginning of time and now it is facing unpriced problems dealing with the COVID-19 pandemic. For resource stock investors, there are lessons to be learned from earlier Canadian explorers and how they turned adversity into positive events.

This takes me back to the early 1970s when a little known group of Arab countries calling themselves OPEC, raised the price of oil from $3 to $10 in the span of six months, sending the world into a financial shock that sent the markets sharply lower; a deep recession followed and persisted for some time.

Collectively, Albertans in stoic fashion may have asked themselves back then what resources do we have for dealings with this crisis. The workers, investors, petroleum geologists, and just-graduated petroleum geologists with new science and techniques went back into the old oil and gas fields of the thirties, forties, and fifties and brought new life into them. They then discovered new ones and built a new and better industry that helped restore other parts of Canada, during a bleak period when eastern Canadian industry faced an uncertain future.

They built pipelines under the leadership of Robert Blair, gambled in the Beaufort Sea with companies like Jack Gallagher’s Dome Petroleum. New upstarts started like Numac Oil and Gas, Siemans and juniors like Canadian Natural Resources, a penny stock at the time, took risk capital and deployed it with a much bigger vision in mind and they succeeded. 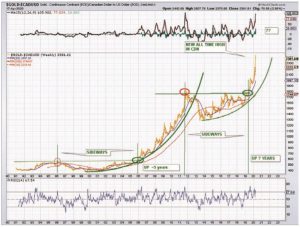 True, they did not have to fight the disappearance of the up-tick rule, or deal with the algorithmic traders, but they too had their crosses to bear with the burdensome National Energy Policy. Despite the risk, these risk takers built a growing thriving business from the vast natural wealth endowed in that part of Canada. I would go further, and say they helped save a nation.

In the early part of the last century, Americans lost the right to hold physical gold, the monetary metal with a history of being money for 5,000 years that was fixed at $35 an ounce. Precious metal shares soared lead by Homestake Mining. Canadian men and women responded by going to the furthest parts of the country in search of gold and silver and an industry flourished, helped by the backing of American and European investors.

Towns were built, as well as railroads and highways to places never explored like Val-d’Or, Kirkland Lake, Timmins, Red Lake, and Abitibi that became major gold camps. These early exploration successes helped build Canada to what it is today – the world’s premier explorer. These exploration successes also helped to build a stable banking industry, tourism, and created capital to diversify the economy with a more industrial manufacturing base. 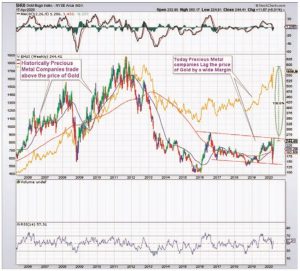 Like Alberta did in the seventies, all of the Canadian provinces endowed with vast and abundant mineral wealth had the opportunity to go back into the old mineral rich areas, shut down when the fixed price of $35 no longer paid the bills to mine profitably, and breathe new life into these areas.

Today, given the price of gold, modern mining techniques, new science, newly found skills of the recent geology graduates and the existing skills of the best miners and geologists in the world right here in Canada, we can give new life to the industry. The deposits don’t move, the jobs stay here, the country benefits and the world benefits from a stable source of supply of both industrial metals and precious metals.

With the world’s central banks having their printing presses rolling, gold is trading at all-time highs in every currency except the US dollar but within a slingshot range of those former highs. The shortage of physical supply is also apparent at the mints and with dealers. Central Banks around the world are adding to their own reserves and have been for the last 10 years. The large miners need to replenish their ever-depleting gold reserves.

In summary, like the oil industry in the 70s, 80s and 90s and the discovery of great mineral deposits, today the petroleum and mining industries have a tremendous opportunity to both continue and expand the further development of the resource sector.