Graphite One [TSX-V: GPH; OTCQX: GPHOF] is forging ahead with plans for a vertically integrated approach to mine and manufacture high-grade anode graphite for the lithium-ion electric vehicle battery market and energy storage systems.

Over the last 30 years, lithium-ion batteries revolutionized the energy industry due to their lighter weight, longer charges, and ability to perform better under extreme conditions compared to the nickel-cadmium batteries of the past.

A key component of lithium-ion batteries is graphite, the primary material used for one of the electrodes named cathode and anode.

When a battery is charging, lithium ions flow from the cathode to the anode, and this process reverses when the battery is discharges energy.

While various materials can be used for the cathode, graphite is the go-to for anodes because of its lower cost and longer life cycles.

Picture a world without lithium-ion batteries. Mobile devices wouldn’t look the way they do now. Picture huge, heavy cell phones and laptops. Also picture that both are so expensive only the very rich can afford them. What you are seeing is the 1980s.

In 2022, graphite accounted for around 90 percent of all anode materials in batteries, including batteries used in electric vehicles.

According to Andy Miller, COO of Benchmark Mineral Intelligence, “both the mined and synthetic graphite market is at a turning point.” 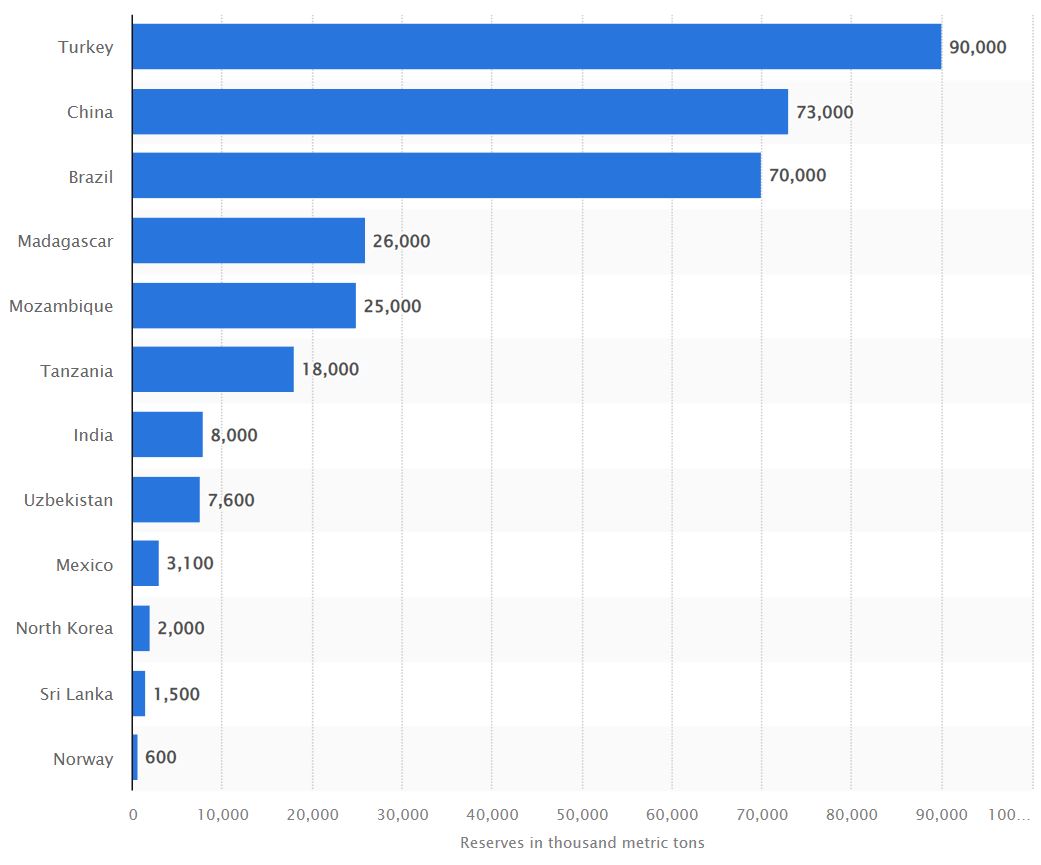 By 2025, batteries will overtake the steel industry as the number one source of demand for graphite, consuming two-thirds of the world’s flake graphite, increasing to almost 80 percent in 2030.

The graphite segment for batteries and other conductive materials has the highest growth rate of 14.2% over the forecast period. The demand for these batteries is primarily witnessed in electric vehicles (EVs). By 2030, the electric vehicles market will need 2,700 GWh worth of lithium-ion batteries annually.

Benchmark sees demand for graphite over the next decade rising at an annual compound rate of 10.5%, however supply will lag at only 5.7%.

Since 2019, the buildout of lithium-ion battery capability has entered a new gear, with the number of mega factories worldwide rising from 17 to 225 and counting.

“Through the mid-2020s we see an increasingly finely balanced graphite market, but if you look towards the end of the decade both synthetic and natural graphite face serious structural issues and significant supply deficit…At the average size of graphite mines of 56,000 tonnes per annum, the industry needs some 97 new mines and 52 new synthetic plants (average 57ktpa) to meet 2035 demand,” according to Benchmark’s Natural Flake Graphite Forecast.

Against sharply rising demand, the accelerated use of lithium-ion batteries and the broader green energy transition will require 4.5 million metric tons of graphite by 2050, according to World Bank data released in 2020 — a nearly 500% increase over 2018 levels.

Demand for natural graphite is set to overtake synthetic by the end of the decade because of worries about synthetic’s environmental impact.

Benchmark forecasts natural graphite anode demand to grow by more than 400% by the end of the decade versus 170% for synthetic.

China has a stronghold on global graphite supply. Synthetic graphite output is 68 percent while the country supplies 90 percent of the graphite used in anodes.

In 2018, the U.S. Government included graphite on a list of 35 minerals or mineral materials that are essential to the economic and national security of the United States, that have a supply chain vulnerable to disruption, and that serve an essential function in the manufacturing of a product, the absence of which would have significant consequences for the economy or national security.

In the race to build an American supply chain to support the electric vehicle battery and energy storage market, and challenge China’s dominance, one company is charging ahead. 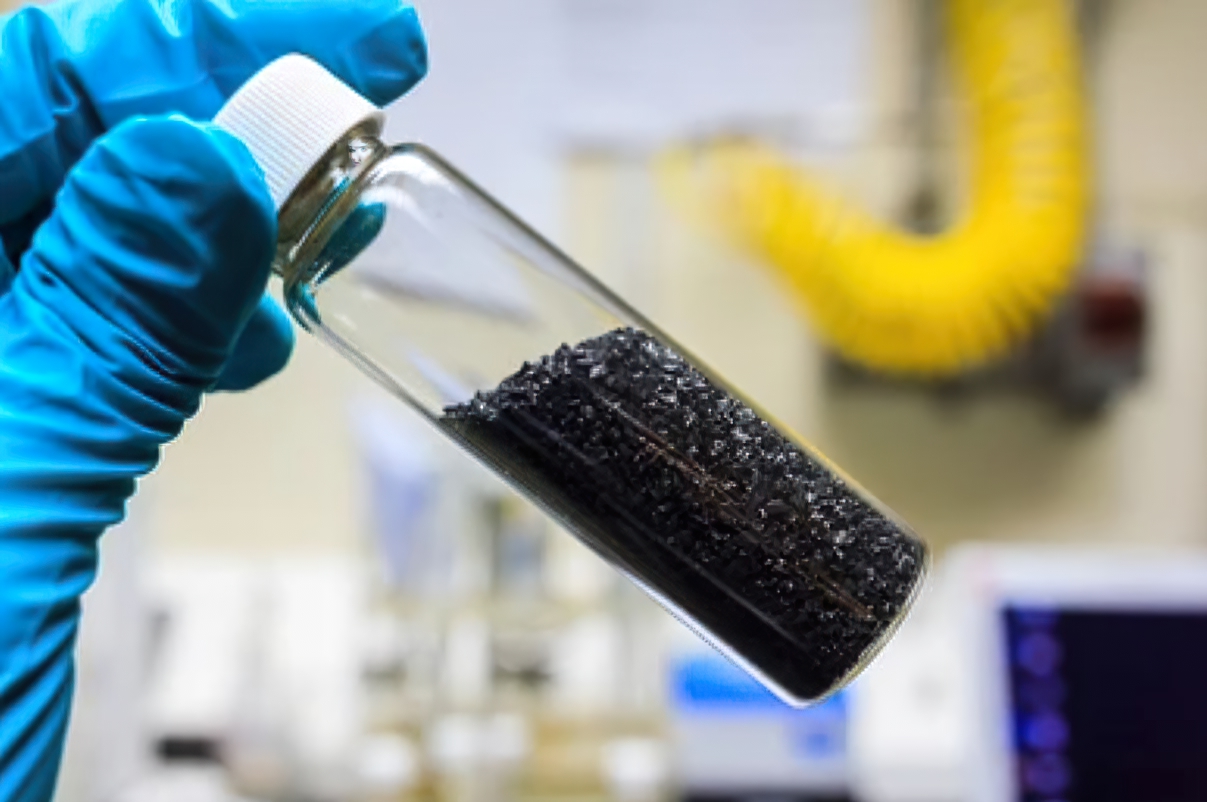 The Company’s plan is for graphite from the company’s Graphite Creek Property situated on the Seward Peninsula, 60 kilometres north of Nome, Alaska, to be mined, then crushed, ground, and concentrated in a processing plant on site to enrich the graphite concentrate for shipment. The bagged concentrate would then be loaded onto 20-foot shipping containers and barged to Washington State, where the Company plans an advanced manufacturing facility for lithium battery anode materials.

The October 2022 Pre-Feasibility Study envisions a mine at Graphite Creek that would produce an average of 51,813 tonnes of graphite concentrate at 95 percent per year for 23 years. The product processing plant would pelletize and thermally purify the graphite concentrate to 99.95 percent pure and deliver 41,859 tonnes of battery-grade graphite anode material for electric vehicle lithium-ion batteries and energy storage systems. The remaining graphite material—projected at 7,354 tonnes of purified graphite and 18,057 tonnes of unpurified graphite per year, would be sold for other industrial and techno advanced 1099 uses. 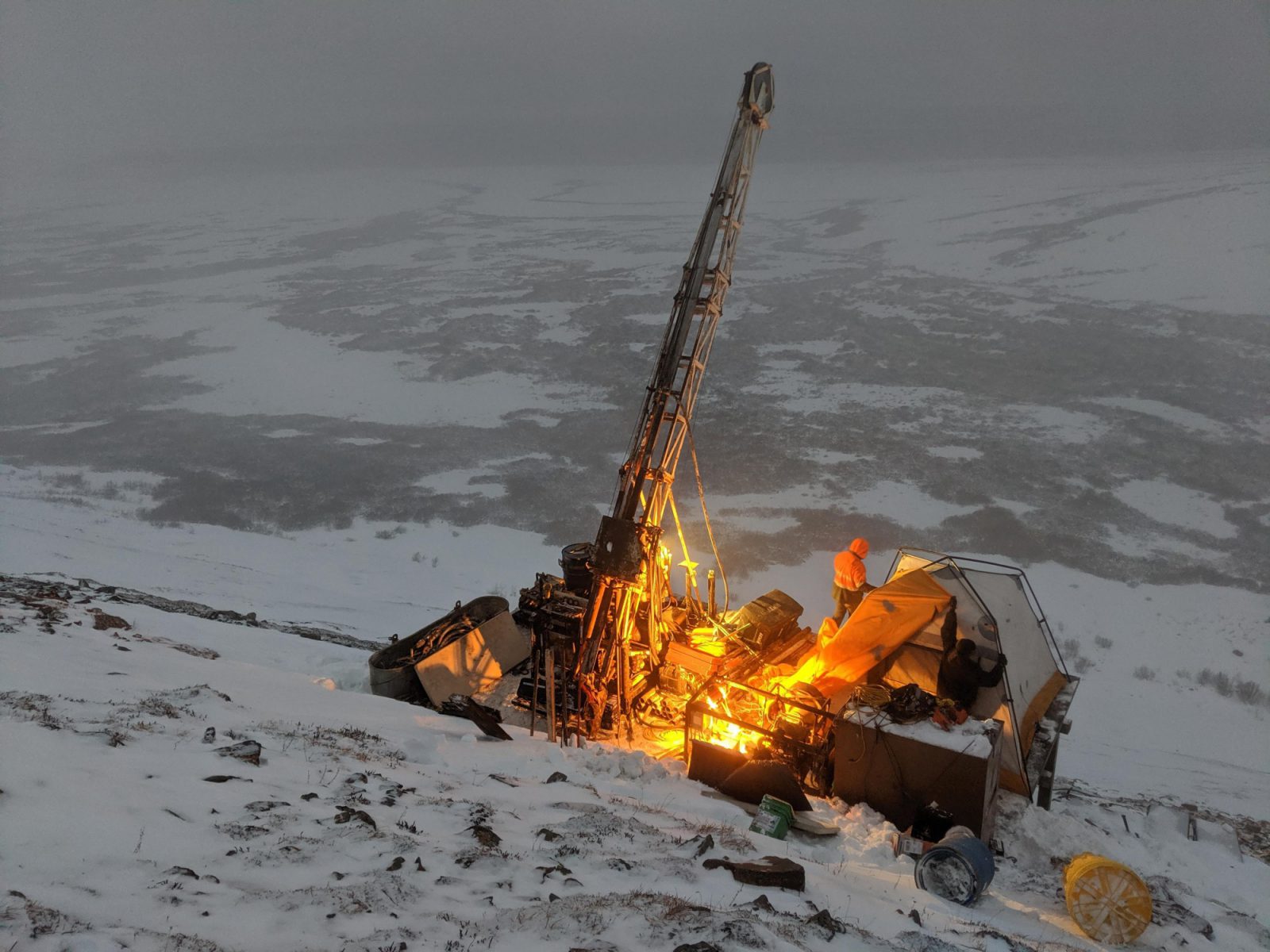 Over its 23-year mine life, the mine would produce 22.5 million tonnes of ore with an average grade of 5.6% Cg (total carbon in graphite form) with peak mine production expected to be about 11,000 tonnes per day.

“We are excited with the exploration results to date, especially because we’ve assessed just seven percent of our graphite mineralization, and the current resource estimates could represent a small portion of Graphite Creek’s potential. So far, the prefeasibility plan is based on one kilometre of what we think could be 16-kilometre deposit,” says Anthony Huston, Founder, CEO and Director of Graphite One.

Graphite One is moving the project closer to production over the next few years at a time when there is a significant increase in domestically supplied graphite for lithium-ion batteries and energy storage systems necessary for the rapid transition to a global renewable-energy-economy.

According to Benchmark Mineral Intelligence, a battery mega factory capable of producing 30 gigawatt-hours of annual capacity, roughly the size of Tesla’s Gigafactory in Nevada, requires about 33,000 tonnes of graphite anode material per year. 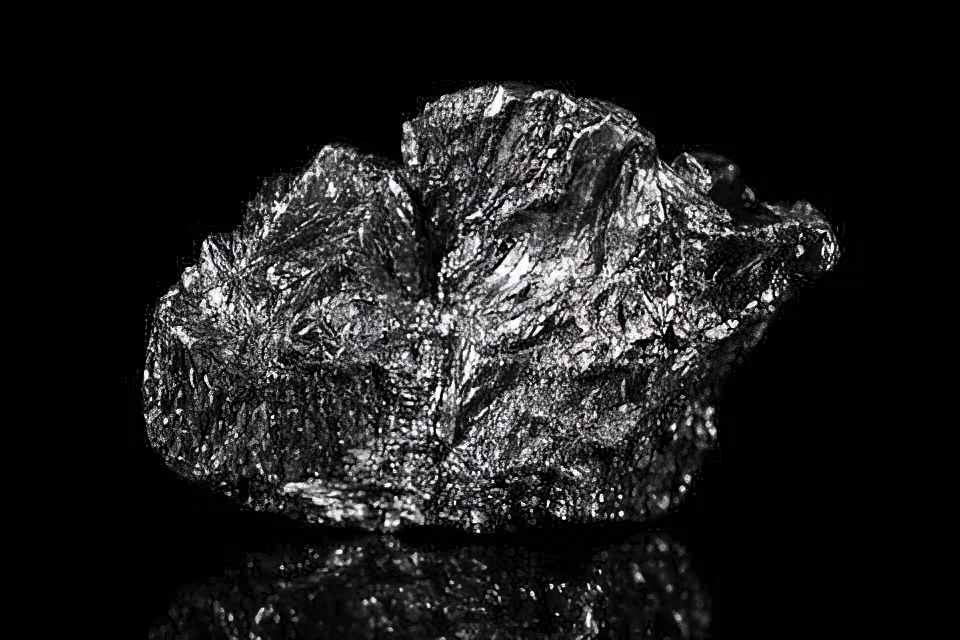 Recently the U.S Department of Energy said 13 new battery mega factories are expected to come online in the US in the next five years, and the number of mega factories worldwide rising from 17 to 225 and counting.

The World Bank projects that annual graphite demand will increase by 490 percent by 2050.

The global shortfall initially predicted for 2024 and 2025 has now increased with an estimated deficiency of 20,000 tonnes of lithium-ion battery grade graphite in 2022.

“We have seen an increase in interest in our project from both US government policymakers and EV automakers across the board,” says Huston.

Part of the reason for this interest is to secure domestic supply. Currently, China has dominance in the graphite industry, producing 820,000 metric tons in 2021 which accounted for 79% of the world’s graphite mining.

After China, Brazil and Mozambique are the next largest graphite producers. Brazil produced 68,000 MT last year, while Mozambique’s output was 30,000 MT. Russia, Madagascar, Ukraine, Norway, Canada, India, and Sri Lanka round out the remaining Top 10 countries that produce graphite.

Meeting growing graphite demand will be a major challenge for automakers seeking to launch their products in the United States over the next few years. To spur production, the recently passed Inflation Reduction Act included EV tax credits that could go as high as $7,500 for automakers that adhere to a few specific requirements.

Given graphite makes up 48 percent of the material that goes into lithium-ion batteries powering electric vehicles, American automakers will be seeking American supply, and the anode graphite supply from Graphite One would qualify for the tax credits.

In 2021, natural graphite was not produced in the United States, while U.S. companies consumed 45,000 tons of the mineral, estimated to be worth $41 million. The United States imported about 53,000 tons of graphite last year, mainly from China. It also imported graphite from Mexico, Canada, India, and other sources.

“Driven by US domestic demand and supply, Graphite One is working on a feasibility study which will solidify the engineering, permitting and construction details of the Graphite Creek Mine in Alaska and the advanced processing facility in Washington state, where there is a readily available supply of clean hydroelectricity – a green power supply to produce a green energy material.” says Huston.

As is, the (pre-tax) net present value of the project is US$1.93 billion with an internal rate of return of 26 percent pre-tax and a payback period of 4.6 years. The life of mine life of 26 years and the capex could be repaid in 5.1 years.

Graphite One has caught the attention of institutional and retail investors alike. The Company recently closed a C$10.7 million capital raise issuing 9,322,987 units at a price of C$1.15 PER unit, which includes one share and one warrant priced at 1.50.

Over the past year, Graphite One has traded in the range from a high of C$2.00 and a low C0.90 cents and has 87.8 million shares outstanding with a market cap of C$104 million.

In April 2022, Graphite One signed a memorandum of understanding with Sunrise New Energy Material Co. Ltd., a Chinese lithium-ion battery anode producer. The MOU is designed to develop an agreement to share expertise and technology for the design, construction, and operation of its GI’s facility in Washington state.

The Company signed a non-binding initial MOU the same month with Lab 4 Inc., of Nova Scotia, to work together to design, develop and build a recycling facility for end-of-life electric vehicle and lithium-ion batteries, co-located at the Washington state site, completing a fall circular recovery approach – from mining to recycling.

In terms of the project’s ESG profile – its Environment and Social impacts and Governance policies – “we are consulting with local tribes and business development organizations to investigate opportunities to work together so everyone benefits from this project,” says Huston.  “I want to close on this point, because sometimes the numbers, the dollars and NPV, get all the focus.  Everyone at G1 strongly believes in our commitment to be a good neighbor in the communities in which we operate, in both Alaska and Washington State.  I never mention the jobs we will create without underscoring our local preference for hiring and G1’s commitment to training, so our people can build new skill-sets and move up to new opportunities as we operate our project.  That’s why I say that G1 has great ‘opportunity impact.”

Huston underscores that, a projected 26-year project life based on exploration of just 7% of our total deposit, G1 “is going to be around for a long time.  As a good neighbor in the communities in which we operate, we want local people who join G1 to know they can grow with us.”