Tucked behind the Alaska Panhandle, the Golden Triangle region of northwest British Columbia has an illustrious mining history, recent new discoveries and compelling mineral prospects that explorers are eager to investigate in light of the dramatic rise in gold and silver prices.

Over 130 million ounces of gold, 800 million ounces of silver and 40 billion pounds of copper have been discovered in the Golden Triangle and this is only scratching the surface. Some of this wealth came from the famous Eskay Creek Mine that was Canada’s highest-grade gold mine and the world’s fifth largest silver producer. In addition to the two currently operating mines – Pretium’s high-grade, underground Brucejack Mine and the Imperial Metals open pit Red Chris copper-gold mine – exploration results by numerous junior explorers have made it clear that the Golden Triangle is metal-rich with further significant discovery potential.

With most of the southern half of the Golden Triangle characterized by rugged mountains and some locales with no road access, helicopter access is needed. Infrastructure improvements have made life easier, including the completion of a $700 million high-voltage transmission line, the paving of the Stewart-Cassiar Highway north from Smithers (Hwy 37), the opening of ocean port facilities for export of concentrate in Stewart and the completion of a three-dam, 277 MW hydroelectric facility located 70 km northwest of Stewart.

There are several dozen junior explorers actively targeting the Golden Triangle, including the three junior Stocks to Watch profiled below.

Aben Resources Ltd. [ABN-TSXV; ABNAF-OTCQB; E2L-FSE] is following up on last year’s encouraging exploration results at the 100%-owned Forrest Kerr gold project in the heart of the Golden Triangle region. Numerous areas of interest have been identified since the company began systematic exploration in 2016, with a total of 70 drill holes (21,968 metres) completed to date. 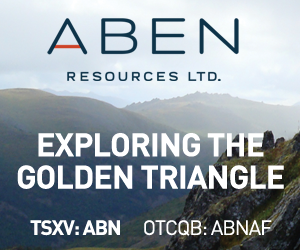 The road-accessible Forrest Kerr property, which also has power available, consists of four separate claim blocks comprising 56 mineral claims (23,397 hectares). Surrounding the project are notable mineral deposits and producing mines including Pretium’s Brucejack Mine, the past-producing Eskay Creek and Snip mines as well as advanced projects including Galore Creek, Copper Canyon and others.

An exploration camp has been established and groundwork is now underway. The initial fieldwork comprises mapping, prospecting, soil sampling and rock sampling to better define existing targets and generate new targets for a drill program later in the season (permits are currently in place).

The initial area of focus will be on the west bank of Boundary Valley, roughly 500 metres south of the high-grade mineralized zone at North Boundary. This area is host to a 300-metre-long corridor of polymetallic mineralization that has returned gold grades ranging from 10 to 43.4 g/t gold, 29.2 to 46 g/t silver and 1.3% to 4.6% copper in multiple rock samples from outcrop. Drill hole FK19-53 intersected a mineralized horizon located 110 metres directly below these surface samples that averaged 1.2 g/t gold, 2.4 g/t silver and 0.3% copper over 19 metres that demonstrated the continuity of mineralization over a significant vertical extent. The gold-silver-copper mineralization and alteration seen in drill hole FK19-53 core closely resembles mineralization previously discovered by Aben at the North Boundary Zone. 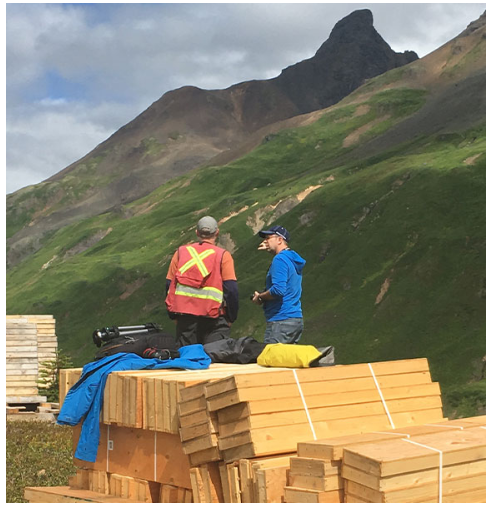 This mineralized corridor is located west of the Nelson Creek fault, previously thought to cut off the polymetallic mineralization found east of the Nelson Creek fault at North Boundary. A large and untested magnetic anomaly is located 190 metres west of the mineralized trend in a scree-covered area with little outcrop present. The coincident magnetic anomaly, combined with the confirmed precious metal mineralization in both outcrop and drill core from this area, makes for a compelling target that will be further explored this season.

Jim Pettit, President and CEO of Aben Resources, stated: “We are pleased to be back up at the Forrest Kerr Project for another season of exploration. We have utilized the off-season to work up some very site-specific targets based on detailed drill analytics, surface sampling and geophysical analysis from the past three years. The initial work this year will involve ground truthing the targets selected before drilling later in the summer. We will start in an area that has an abundance of high-grade surface and outcrop mineralization that is coincidental with downhole mineralization directly below the surface samples. This is basically the process we used to discover the high-grade-gold zone at North Boundary.” 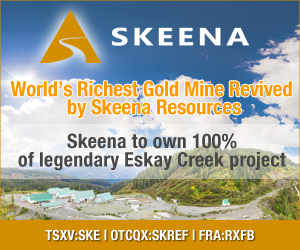 Skeena Resources recently signed a definitive agreement to acquire 100% interest in the Eskay Creek property from Barrick Gold Corp. While the former Eskay Creek Mine was an underground operation, Skeena management is now looking at the project as an open-pit. The company released a robust Preliminary Economic Assessment in late 2019 and is currently focused on infill and exploration drilling at Eskay Creek to advance the project to Pre-Feasibility. 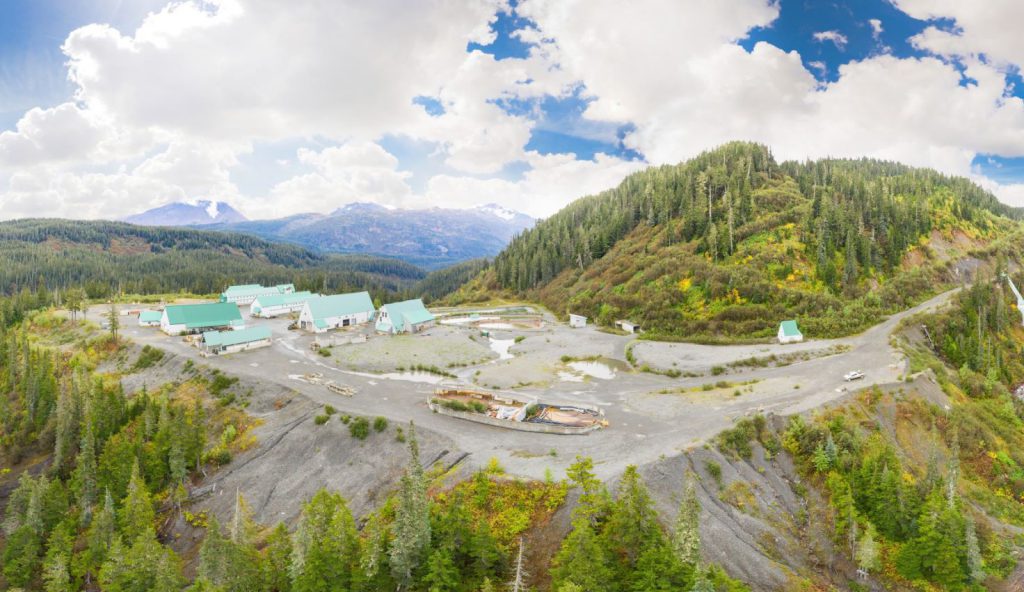 Six surface drill rigs are currently being utilized for the 2020 Phase I program in the 21A, 21B and 21C Zones for infill drilling. The Phase I infill drill program at Eskay Creek continues to predictably confirm the grades and spatial limits of the resource model that was derived largely from the historical drilling database.

Skeena has begun a Preliminary Feasibility Study (PFS) for the Eskay Creek gold-silver project. The goal of the PFS is to technically further de-risk Eskay Creek while developing an appropriate execution strategy to ensure fast-tracked development towards commercial production.  Part of the development of the PFS is the extensive ~68,000-metre infill drilling program designed to upgrade a large portion of the Inferred Resources into the Measured and Indicated category and following completion of the PFS, declare maiden reserves. In addition to the ~68,000 metres of infill drilling, Skeena plans to complete ~20,000 metres of exploration drilling at Eskay Creek in 2020. This will be the first exploration drilling Skeena has done at Eskay since optioning the property in 2017.

A total of 280,000 metres of historical surface and underground drilling has been completed at the Snip Project as well as 8,435 metres of underground development. Exploration and 200 Footwall Corridor delineation drilling is planned for 2020.

“Our efforts in the coming months will focus on expanding these now well-defined resources with expansion drilling in the newly evolving 200 Footwall Corridor as well as other near-mine targets,” notes Paul Geddes P.Geo, Vice President of Exploration & Resource Development. “In parallel with SRK, Kathi Dilworth, Skeena’s Chief Resource Geologist, has developed a very robust and defendable resource model that will formulate the basis of future economic studies.” Walter Coles Jr., President and CEO, added, “We are very excited about the maiden resource at Snip, particularly because of the excellent grade and the proximity to Eskay Creek. We will commence drilling at Snip shortly to follow-up on the exciting exploration success from last summer in an effort to expand the resource.”

Company geologists are of the view that they have found the source of a large, strong, gold-silver anomaly, up-slope of previous work, where styles of mineralization include high-grade vein-hosted gold+/-silver, replacement/skarn, and intrusion-related bulk tonnage potential.

Interpreted as an intrusion-related system, at Snoball a body of diorite has been emplaced along the northwest-trending, faulted contact between Stuhini Group sedimentary rocks to the west, and Hazelton Group volcanics to the east. 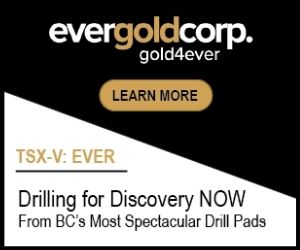 The objective of the Phase 1 drill program is to explore the Pyramid Peak area for the potential source, or sources, of a large, strong, gold-silver soil and talus-fines geochemical anomaly developed by Noranda in the early 1990s at considerably lower elevations, some 500-700 metres downslope. Reanalysis of the historical Noranda drill results also points to a strengthening of values in mineralized hornfelsed sediments from south (e.g. hole 92-11 – values generally <100 ppb gold), to north (e.g. holes 92-7 and 92-12 – values generally averaging in the hundreds to (occasionally) thousands of ppb gold).

The identification of Pyramid Peak as the potential source followed sampling by Evergold in 2016 and 2017, which returned consistently strong values of gold in talus fines, including 39 samples averaging 0.718 g/t gold (excluding a single high value of 25.1 g/t gold).

As of late July, first-ever Phase 1 drilling of the Pyramid Peak target from the “Apex” pad is progressing on schedule, with approximately 1,675 metres of the targeted 2,400 metres, in eight holes, completed to date, and hole SB-20-009 presently underway. 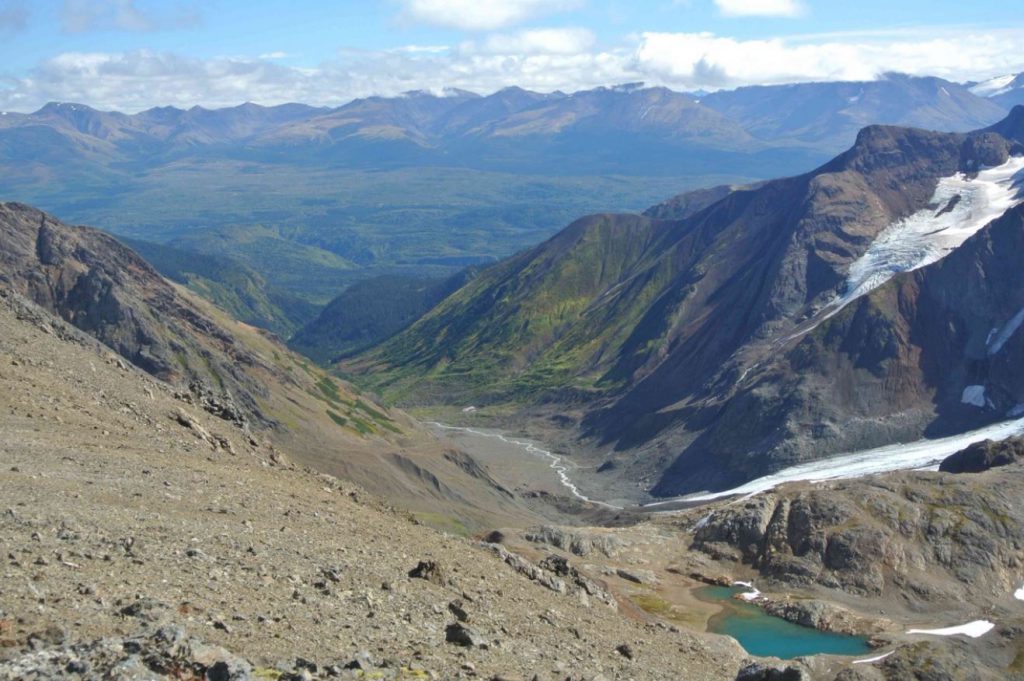 Evergold anticipates receiving initial Phase 1 assay results in August. It is expected that drilling will continue from the Apex pad for the remainder of the Phase 1 program. Contingent upon successful results of the Phase 1 work, a Phase 2 drill program may be undertaken during the latter half of the 2020 field season.

Evergold is also drilling its Golden Lion prospect east of the Golden Triangle in the Toodoggone region of northern British Columbia. Approximately 2,400 metres of Phase 1 drilling is planned, focused on multiple high priority gold, silver and copper targets within the GL1, GL2 and GL3 target areas.  Contingent upon successful results of the Phase 1 work, a Phase 2 drill program may be undertaken immediately thereafter.

The company is well-funded to carry out its summer 2020 exploration programs.