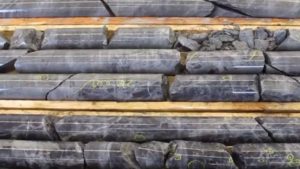 TomaGold shares jumped 44% or $0.02 to 6.5 cents on volume of 6.3 million, making the junior the most actively traded stock on the TSX Venture Exchange Thursday. The 52-week range is 4.5 cents and 9.5 cents.

Monster Lake is joint venture held 50% by Iamgold, 45% by TomaGold and 5% by Quinto Resources Inc. [QIT-TSVX].

TomaGold said Iamgold is reporting the final assay results from all 26 holes, totalling 8,282 metres, that were completed as part of the initial 2018 program.

This resource is contained in four discrete mineralized zones where geological and grade continuities have been demonstrated and have been estimated assuming an underground mining scenario.

The most significant zone is the 325-Megane Zone, which is characterized by its high-grade and remains open down plunge and at depth. The potential for adding additional resources along the identified shear structure is considered favourable and remains the focus of ongoing exploration programs, the company has said.

The 2018 winter drilling program was designed to improve confidence in the continuity of the mineralization and to test for extensions of the known mineralized zones.

Key objectives of the drilling program are as follows:

All of the areas targeted in this program are best accessed during the winter when the ground is frozen, TomaGold said.

“We continue to be impressed with both the continuity and the high grades demonstrated by infill drilling of the 325-Megane Zone,” said Craig MacDougall, Senior Vice-President, Exploration at Iamgold.

Looking ahead, these results will be incorporated into the deposit model and used to update the mineral resources to guide the next drilling programs.

A further round of drilling is being planned to test specific structural targets, which are accessible in the summer season.