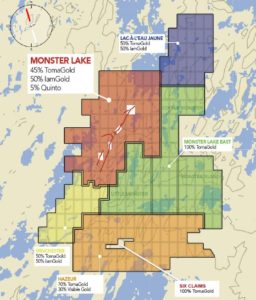 The 2017 winter drilling program was designed to target high potential areas along the 3-km trend of the Monster Lake Structural Corridor (MLSC) and associated shear zones to improve confidence and expand known zones of mineralization, as well as better define more recent discoveries such as the new zone located 200 to 400 metres to the north of the Megane Zone, as well as mineralization discovered within a parallel structure, the Lower Shear Zone, that has returned encouraging initial results. Interpretation of the structural setting suggests favourable potential for the occurrence of additional mineralized shoots along this major structural corridor.

The results from this drilling program have demonstrated continuity of very high grades of mineralization associated with the Megane Zone where tested with infill diamond drill holes. They have also extended mineralization in the northern part of the mineralized shoot with positive results obtained from holes ML17-197 and ML17-201B. As well, new areas of mineralization to the north of the Megane Zone, which appear to be associated with multiple mineralized shear zones, will require further drill testing to evaluate the potential of this area. The most recent assay results received from drill holes intersecting the Lower Zone hosted in a parallel shear zone northwest of the Megane Zone are also considered encouraging and include hole ML-17-191 which intersected 85.27 g/t Au over 1.8 metres (see press release dated May 11, 2017) and hole ML-17-199 which intersected 39.48 g/t Au over 1.6 metres.

Craig MacDougall, Senior Vice President, Exploration for IAMGOLD, stated, “With all assay results now in hand from our winter campaign, we are working to revise the deposit model to better understand the resource potential of the Megane Zone. Importantly, the drilling program has continued to identify new areas of gold mineralization along the main shear and associated with parallel structures, again reinforcing our view of the favourable potential for the discovery of additional mineralized zones.”

“The winter drilling campaign was a real success. It confirmed the presence of numerous new high-grade intersections and, as a result, significantly increased the gold potential of the Monster Lake project,” said David Grondin, President and CEO of TomaGold. “We are eager to see drilling resume and strongly believe that IAMGOLD will be able to unlock the full value of this project.”

In the coming weeks, a 1,600-metre diamond drilling program is planned to test the gold-bearing structures from areas accessible in the summer season. The program will specifically target the Lower zone as well as complete additional infill holes at the Megane Zone. The results will be incorporated into the deposit model and may lead to the completion of an initial mineral resource estimate by yearend. Further drilling will be required to evaluate the potential of the new mineralized areas and are scheduled for next winter.