Highlights from the 2018 summer program include:

“Tower has completed a detailed review of the Rabbit North project including surface mapping, core re-logging, geophysical re-interpretation and 760 m of diamond drilling in two holes in the Western Magnetite Zone”, adds President & CEO Garett Macdonald.  “We are very encouraged by the results and this work has given us a greater understanding of the controls on the mineralization as well as the exploration potential for the project. This summer’s work suggests we are looking at multiple zones of structurally controlled alkalic porphyry related mineralization connected to a deep IP anomaly which can carry high grades of copper and gold, similar to the nearby New Afton underground mine.  Tower’s next phases of exploration will include deep pentrating geophysical surveys over the Western Magnetite, Chrysocolla, Dominic and Buff mineralized zones (see figures 3 and 4 ) to provide detailed interpretation of each area prior to commencing diamond drilling”.

*Width refers to drill hole intercept. True widths have not been determined.

**Copper Equivalent (CuEq) is used for illustrative purposes, to express the combined insitu value of copper and gold as a percentage of copper. No allowances have been made for recovery losses that would occur in a mining scenario. CuEq is calculated on the basis of US$2.65 per pound of copper and US$1250 per troy ounce of gold, using the formula:

The road-accessible Rabbit North project comprises approximately 16,400 hectares in the infrastructure-rich copper and gold porphyry belt of southern British Columbia.  The producing New Afton copper and gold mine is approximately 14 kilometres east of the main Rabbit North targets and the Highland Valley Copper Mine, operated by Teck Resources Ltd., is located 28 kilometres to the west. 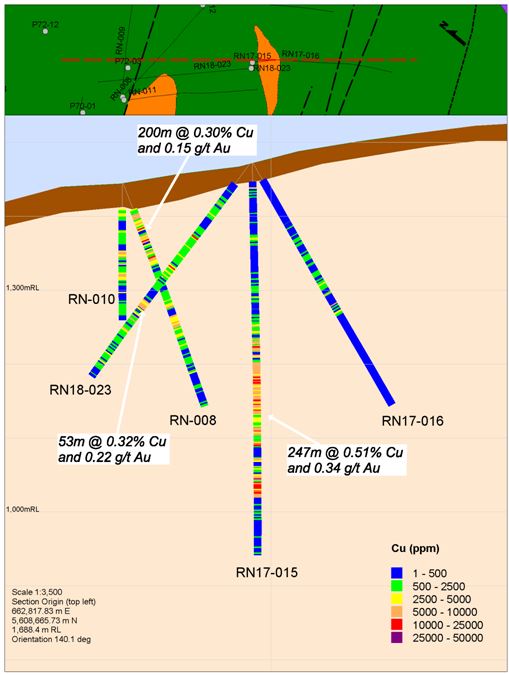 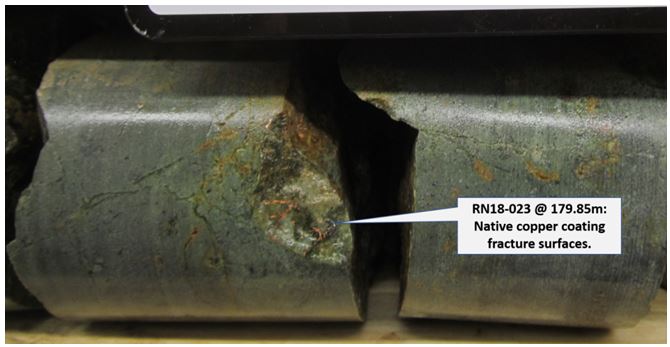 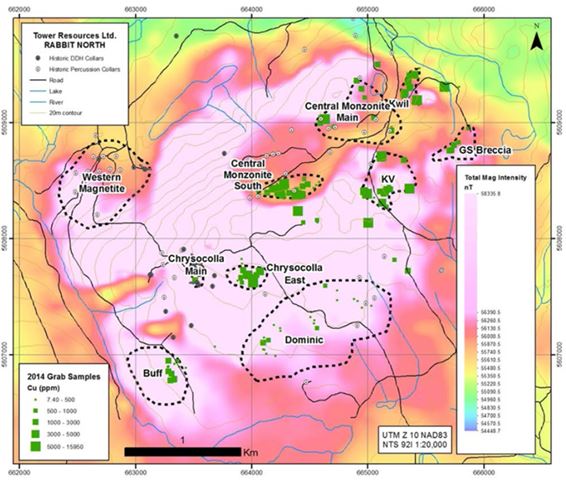 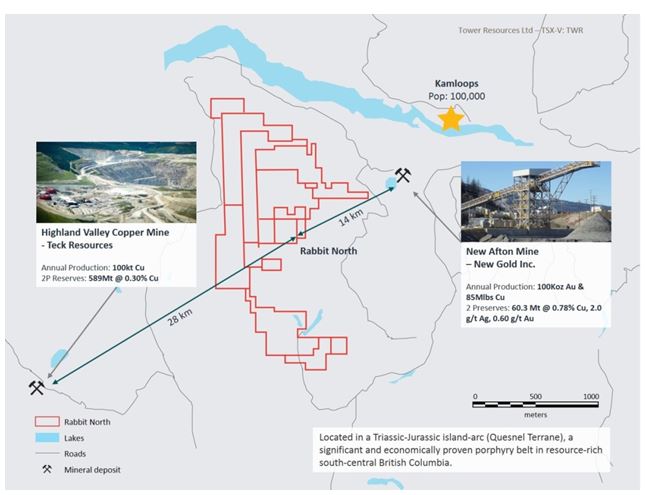 Drill core samples – generally 2 metres in length – were split at Tower’s core logging facility in Kamloops, BC.  Samples were prepared for analysis and analyzed at Activation Laboratories (ActLabs) in Kamloops, BC, an ISO/IEC 17025 Accredited (Lab 790) by the Standards Council of Canada. Samples were analyzed for gold by fire assay and ICP-OES and for 37 further elements, including copper, by ICP-OES using a four-acid, near-total digestion. Overlimit (>1%) copper analyses were repeated using the same procedures but at a higher detection range. QA/QC samples including blanks, standards and duplicate samples were inserted regularly into the sample sequence at a ratio of approximately 1:10.

The technical content of this news release has been reviewed and approved by Darrell Hyde, P.Geo., Exploration Manager for the Company and Qualified Person as defined by National Instrument 43-101.

Tower is a Canadian based mineral exploration company focused on the discovery and advancement of economic mineral projects in the Americas.  The Company’s key exploration assets are the Rabbit North copper-gold porphyry project located between the New Afton and Highland Valley Copper mines, the Nechako gold project near New Gold’s Blackwater project and the More Creek and Voigtberg gold projects in the Golden Triangle area of Northern British Columbia.