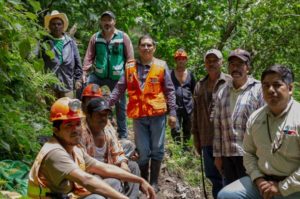 Mining in the Rosario area goes back more than 250 years – mainly for gold and silver – however, there are also lead and zinc credits in the known mineralized zones on the San Marcial property that hosts a NI 43-101 compliant historical resource (2008) of 30 million silver equivalent (AgEq) ounces.

Goldplay optioned San Marcial in May 2018 and in a fortunate set of circumstances, the company has unearthed diamond drill core from a 22-hole 2010 drilling program. The drill core was stored in a neighbouring Mexican state. The company now has in its possession all the existing core from San Marcial, some of which was only partially sampled. When Goldplay geologists were re-logging and sampling the drill cores, they were pleasantly surprised to discover prospective valuable mineralization that was never assayed.

The mineralized drill core discovery provides the potential to expand the size of the known San Marcial deposit. This is being confirmed as the company has been releasing significant high-grade silver assays obtained from the old core, including 1,285 AgEq grams/tonne over 1.5 metres. Other positive examples include 57.3 metres (True Width 51.6 metres) grading 122 g/t AgEq, including 278 g/t AgEq over TW 12.9 metres and also including TW 16.7 metres of 117 g/t AgEq. Another hole ran 379 g/t AgEq over 11.2 metres (TW).

Goldplay President and CEO Marcio Fonseca commented, “The shallow depth of intersections, favorable topography, width and high-grade of results announced recently continue to reinforce the high-grade open pit development potential at San Marcial. The results also outline opportunities for expansion of the deposit, not only considering the silver mineralization but also zinc and lead, with definition of new mineralized zones along strike and down dip, which were not previously incorporated in the historical interpretation. New Ag-Zn-Pb-Au mineralized zones identified from systematic sampling of historical core will be included in the upcoming resource estimation update scheduled for release in January 2019.”

In management’s view, these encouraging drill core sample results support the open pit potential for the initial 500-metre long historical resource area. With further drilling required, to this end, Goldplay has now received drilling and trenching permits for a San Marcial drilling program to complement the resource estimate due to be released in January and the subsequent Preliminary Economic Assessment scheduled for completion in 2019. In addition to the old core confirming mineralized zones, the new drilling campaign along the 3.5-km mineralized trend outside the historical resource could potentially identify new discoveries. The permits allow 69 drill holes, either by diamond core or reverse circulation techniques.

The San Marcial Project is favourably situated with infrastructure that includes a camp, power line and access roads.

Goldplay recently released assays from drilling the nearby 100%-owned El Habal Project 20 km west of San Marcial, the site of several past-producing mines. The El Habal property features an oxidized gold-mineralized zone that outcrops along a series of rolling hills that displays evidence of shallow, historical underground mining along a 6-km prospective corridor.

Goldplay has other projects in Mexico, including Yauco, Villa Union, El Placer II, and the Golconda Summit Project in Nevada.

The company has attracted investments by other mining companies, including Sandstorm Gold Ltd. [SAND-TSX], 7.8%; JDS Energy & Mining Inc., 5.6%; and SSR Mining Inc. with a 3.3% interest. Part of the reason is the fact that Goldplay’s management team has over 30 years of experience with senior roles in exploration, financing and development in the mining sector, including over 10 years of exploration experience in the Rosario Mining District that has led to successful mineral discoveries.

Insiders and management hold a 21.7% interest in the company. Goldplay Exploration has 38,457,143 shares outstanding fully diluted.