Solaris Resources Inc. [SLS-TSX, SLSSF-OTCQB] is a company that offers investors exposure to a series of world class porphyry copper discoveries and untested gold potential at its flagship Warintza Project in southeastern Ecuador.

Warintza was discovered in the early 2000s by geologist David Lowell, who was a consultant and strategic partner to Solaris when he passed away in May 2020. He was 92 at the time of his death. 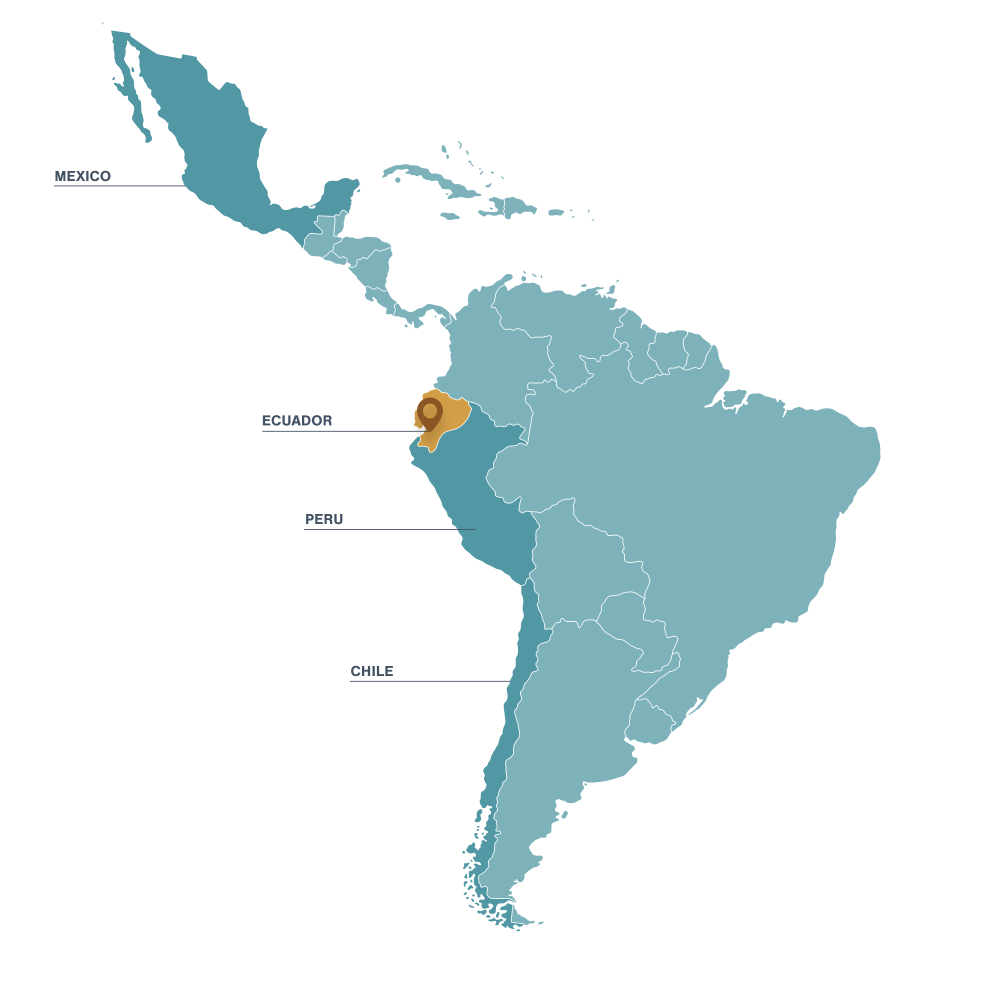 During his legendary career, Lowell co-developed the porphyry copper model which now accounts for 60% of the world’s production and was involved in more than a dozen major discoveries, including La Escondida in Chile, now the world’s largest copper producer and the 8.0-million-ounce Pierina gold deposit in Peru.

His protÃ©gÃ©, Jorge Fierro, is currently Vice-President, Exploration at Solaris, which in turn is a member of the Augusta Group of companies. Augusta Group has an unrivaled track record of value creation totaling over $4.5 billion in exit transactions within the last decade.

Warintza runs adjacent to a highway and power grid and is located north of the Mirador mine, one of the world’s lowest cost copper operations and largest mine in Ecuador.

In an interview, Solaris President and CEO, Daniel Earle, said:

Warintza is a world class discovery. It sat largely dormant since 2001 due to a breakdown in social relations. At the time, Ecuador was a frontier jurisdiction with no commercial mining industry. Things began to change in 2014 when the government shifted its policy to encourage mineral development. The change was fuelled by Lundin Gold acquiring the Fruta del Norte project, 60 km south of Warintza, and developing it in a socially and environmentally responsible manner. This improved sentiment toward mining development and created conditions for Solaris to successfully restart a dialogue with the communities surrounding its Warintza Project in 2018. That led to a consensus on the restart of the project and the institution of an informed and innovative CSR program resulting in an Impacts and Benefits Agreement providing certainty of community support for the responsible advancement of the Warintza.

The company said the Warintza Central area of the 26,777-hectare project continues to demonstrate the potential to become a large, high-grade, open pit copper porphyry deposit, with the limits of the mineralization yet to be found. “Each drill hole completed on this property to date has returned economic copper mineralization, with the highest grades generally starting from surface lending itself to establishing a robust mine plan with elevated grades benefitting the early years of mine life.”, said Earle. 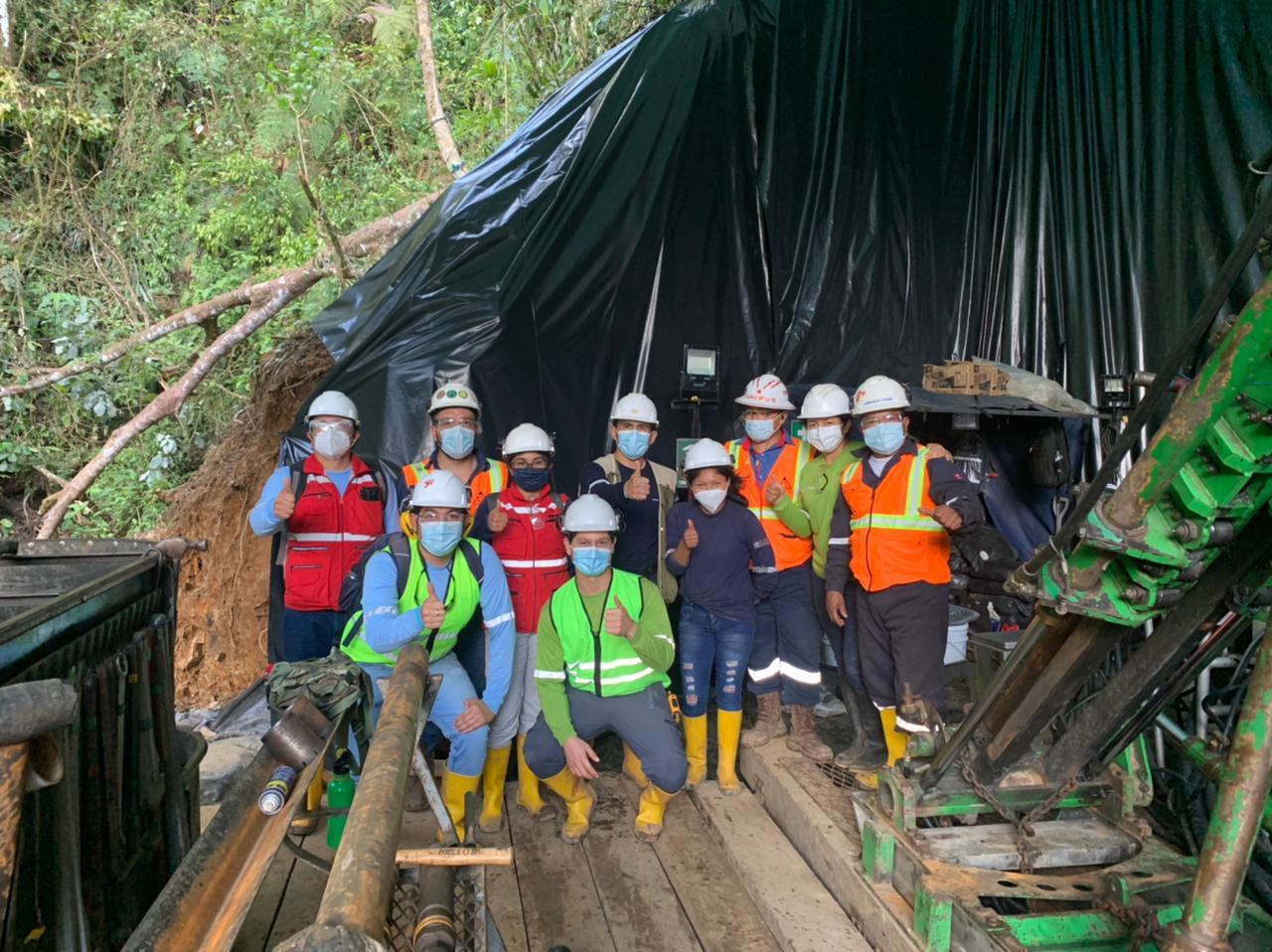 Warintza Central is presently defined by a pit-optimized mineral resource estimate of 124 million tonnes of inferred resources, grading 0.70% copper equivalent (0.56% copper, 0.03% molybdenum, and 0.1 g/t gold). The estimate is based on less than 7,000 metres of drilling on the discovery outcrop and to an average depth of just under 200 metres.

However, with a 40,000-metre drilling program under way, the company is hoping to increase the resource at Warintza Central to around the 1.0 billion tonnes level by the end of this year.

In a July 20, 2021 press release, Solaris announced a major new discovery at the Warintza East target, about 1.0 kilometre east of Warintza Central, where recent drilling has intersected 1,029 metres of 0.73% CuEq, including 420 metres of 0.83% CuEq from surface.

Warintza East is one of five main targets within the 7.0 kilometre by 5.0 kilometre cluster of porphyry targets defined on the property and has a similar expression as Warintza Central, with overlapping copper and molybdenum soil anomalies associated with an underlying high-conductivity anomaly. 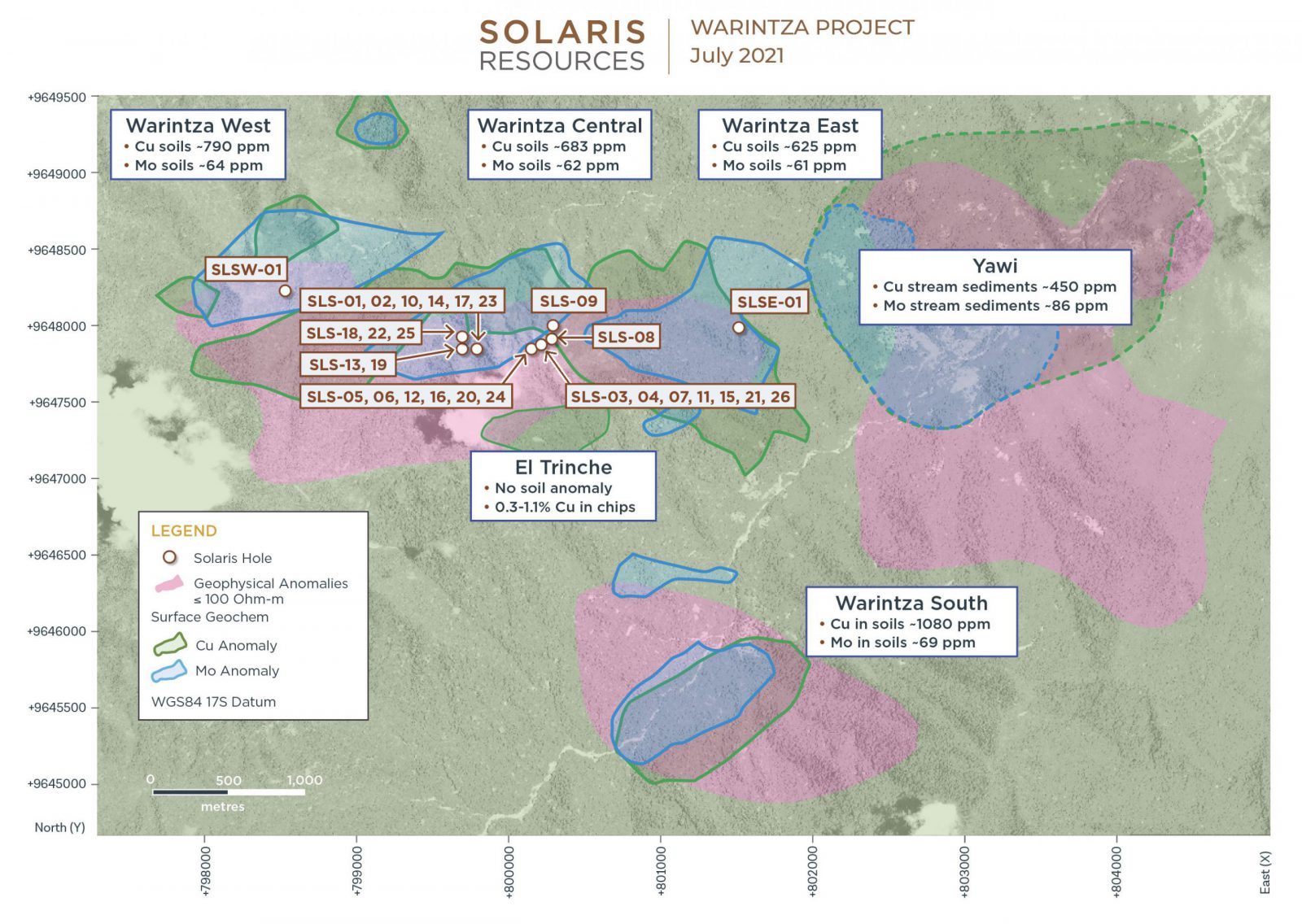 Drill hole SLSE-01 returned 320 metres of 0.46% copper equivalent (CuEq) from surface, including 54 metres of 0.70% (CuEq) in an open interval from a greater than 1,200 metre hole were assays are expected soon for the balance of the hole, marking a major new discovery at Warintza East. It now ranks as the third major copper discovery within the Warintza porphyry cluster.

Future drilling will focus on the open, undrilled area between the Warintza East and Central zones as the footprint of East overlaps conceptual pit designs for Warintza Central, the company has said. 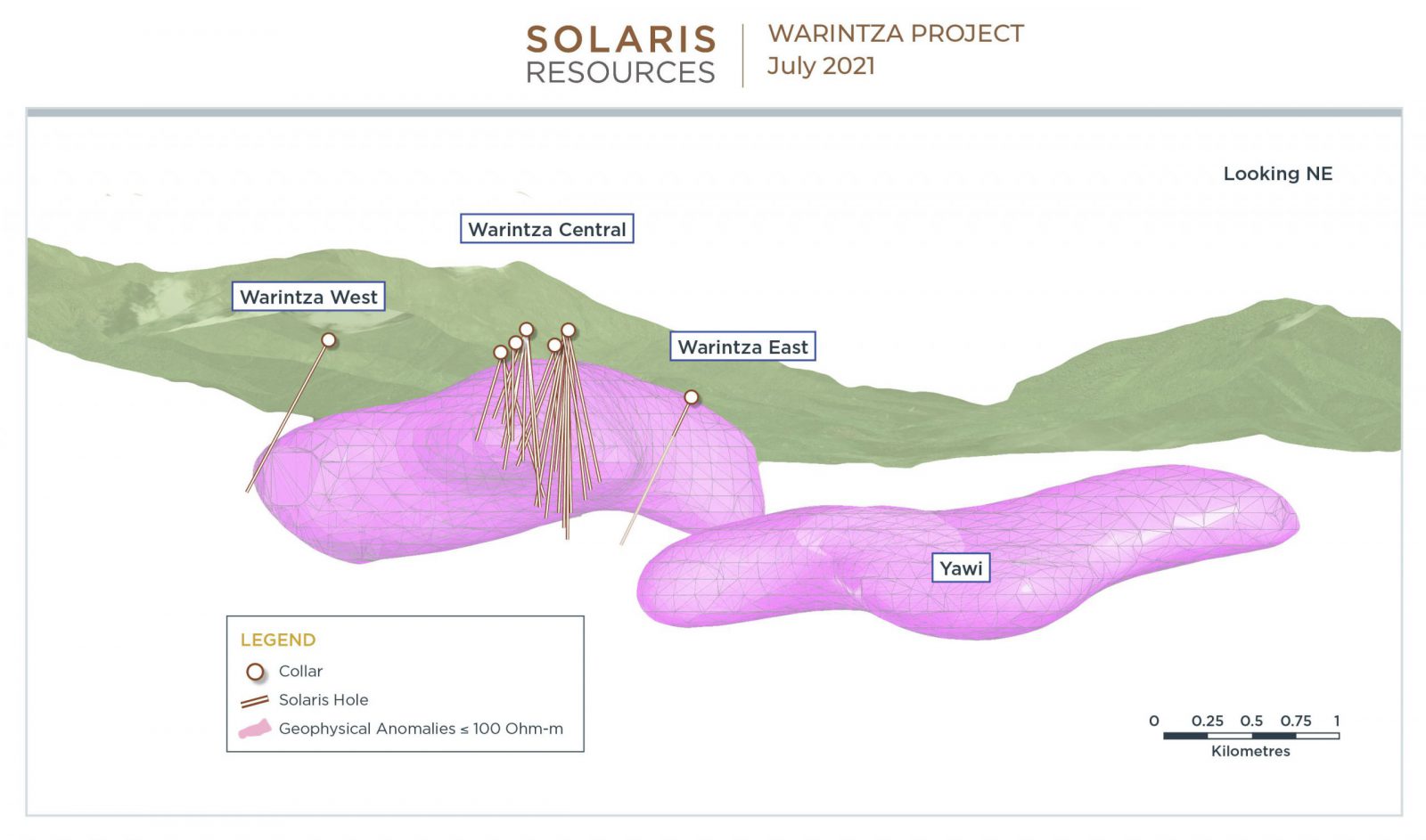 The company also said it had defined a major copper porphyry target at Yawi (located 1.5 kilometres to the east of Warintza East) from further processing of geochemical and geophysical data, a move that has extended the strike length of the Warintza cluster of porphyry targets to 7.0 kilometres.

Maiden drilling results are expected from other undrilled, highly prospective targets within the same vicinity in the second half of 2021, including Warintza South, Yawi, Caya, and other regional targets.

Beyond Warintza in Ecuador, the company also sees discovery potential on its grass-roots projects in Chile and Peru;

Aside from obvious exploration upside, Solaris offers investors, low risk exposure to a resurging interest in copper. Driven in part by expectations of rising demand from the electric vehicles sector, the price of copper reached an all-time high of US$10,700 per tonne during the second quarter of 2021.

Metal analysts say there is little doubt that copper has a big role to play in a decarbonized world.

Demand in the U.S. is widely seen as being on an upward trajectory in the coming years with the massive infrastructure spending plans that are expected to be more copper intensive than most.

It’s a scenario that bodes well for Solaris, making the company a potential takeover target as it works to responsibly and sustainably advance its portfolio of copper and gold projects in the Americas.