It goes without saying that both people and industry need electricity to run their lives and businesses. In recent years, more emphasis has been placed on generating clean, carbon-free power which is why many countries have been taking steps to close down coal-fired power plants.

Big cities and big industry need carbon-free, affordable and reliable base power 24/7 and this is where nuclear power generation takes the stage.

There are some people that are opposed to nuclear power; however, a report by the International Energy Agency points out that “a steep decline in nuclear power would threaten energy security and climate change goals and result in billions of tonnes of additional carbon emissions by 2040”.

Aware of this potential negative scenario, in November 2019, the European Parliament adopted a resolution recognizing the role of nuclear energy in achieving its 2050 climate plan calling for zero emissions.

Due to the COVID-190 pandemic and low prices, the uranium mining industry and the price of uranium has been affected by mine shutdowns, including Cameco’s Cigar Lake and McArthur River mines in the Athabasca basin of northern Saskatchewan. The Athabasca basin is home to the world’s highest grade uranium deposits.

“I think the small increases in the uranium price were due to the supply cutbacks,” said Peter Dasler, P.Geo., President and CEO of CanAlaska Uranium. “The big thing during the last nine or 10 months is that there really haven’t been a lot of transactions in the market for uranium and so not much price movement, although we have seen the overall supply drop by about 60%.”

The U.S. government has been talking about building strategic uranium reserves as 90% of the uranium fuelÂ used today in U.S. reactors is produced by foreign countries. In February, 2020, PresidentÂ Donald Trump proposed setting aside US$150 millionÂ in the 2021 budget to create the uranium reserve. The plan is now close to fruition.

Dasler said the industry is waiting to hear if the U.S. government will pay more for uranium than the market price.

“There is not enough uranium available to supply existing reactors and new ones coming online,” said Dasler. According to the International Atomic Energy Agency, there are 442 reactors around the world and 54 under construction.

At the present time, there is a significant deficit of uranium while, at the same time, there is a growing demand and a global 30% reduction in production due to the COVID-19 pandemic, notably in Kazakhstan which produces 40% of the world’s uranium.

The annualÂ globalÂ supplyÂ deficitÂ of uranium is projected to average a total of 23 million pounds through 2022, or roughly 13% ofÂ global uraniumÂ demand, according to Scotia Capital.

In Japan, even with reactors coming back online after Fukushima, we are not seeing a significant demand for uranium because they already had significant stockpiles. “I think we are going to see more acceptance of nuclear power when looking at the effects of burning gas or coal,” said Dasler. “Eventually, Japan will use up their stockpiles and the Japanese will buy strategic supplies again.”

Uranium explorers have been stepping up to the plate to remedy the deficit situation. Some explorers such as Fission Uranium and NexGen Energy have made good discoveries in the Athabasca basin and Standard Uranium will start its drilling program shortly at its flagship Davidson River uranium project. There is new activity in Africa where geologists are looking at near surface, shallow uranium deposits. However, this is being offset by shutdowns such as the Ranger Mine in Australia.

“If you take into account the time it takes to start a new uranium mine, we are not going to be producing what the world needs unless the price of uranium ramps up to over US$100/lb,” said Dasler. “There are low-grade, underground and in-situ deposits around the world but these have a high cost of extraction. It looks like some of these will have to go into production to cover the shortfall while higher grade deposits like NexGen get online.”

“I think we are going to see a big price spike because, obviously, these nuclear power plants don’t run without uranium,” Dasler commented. “And the uranium stockpiles have been depleted.”

“We are going to see 600 nuclear power plants in the next 10 years and another 200 in 20 years which is a doubling of the current fleet,” said Dasler.

“Realistically, it is very difficult for a uranium mine to be profitable unless the price is over US$65 a pound,” noted Dasler. “To satisfy requirements after 2030, the price would need to be well over US$85 a pound, making the current price unsustainable.”

With the world needing carbon-free, reliable power, eventually the law of supply and demand will increase the price of uranium to a point where more uranium mines will achieve commercial production to satisfy the increasing demand.

Located close to the world’s richest uranium mine, Cameco Corp.‘s suspended McArthur River mine, CanAlaska, with a 70% interest, is following up on a series of uranium discoveries on the West McArthur Project in the southeast Athabasca basin where it operates a Joint Venture with Cameco. Previous operator Mitsubishi spent $16 million on the project. 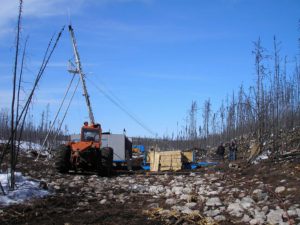 The area has seen limited drill testing to date, but numerous target areas have been defined for future drill testing in addition to the current target zone. Capping these targets is one of the largest mineralized alteration halos in the eastern Athabasca basin. Extensive mineral halos are key characteristics of major uranium deposits including McArthur River and Cigar Lake. At Grid 5 there is evidence for multiple mineralized horizons. A well-defined, 700-metre long target is the focus of the next phase of exploration.

At the Waterbury Project in the central-eastern Athabasca basin, southeast and northeast of the Cigar Lake mine, CanAlaska has planned drill programs for Q1 2021 to test two separate target areas. The targets are near previously drilled holes that showed significant alteration and weak uranium enrichment in proximity to geophysical targets.

During 2020, CanAlaska increased its landholdings in the NE Wollaston area, located in the Eastern Athabasca. The acquisitions focused on large, regional structures similar to those hosting the nearby high-grade Collins Bay-Eagle Point uranium deposits. Historic surface samples returned up to 0.629% U3O8Â near high uranium values in lake sediments.

CanAlaska, with a 100% interest in the +56,000-hectare Cree East Project where $19 million was invested by a previous Korean Industry partnership, is located 35 km west of the Key Lake uranium mill. The property has extensive uranium-bearing systems, both in the basement and at the unconformity, with nine target areas being tested.

The Moon uranium property is approximately midway between the McArthur River and Key Lake mines, and about 8 km east-southeast of Cameco’s Millenium uranium deposit, and immediately southwest of Denison’s Phoenix and Gryphon uranium deposits. The property was optioned by Denison Mines Corp. in 2016, and in 2020 Denison became operator of the 75:25 (Denison:CanAlaska) joint venture.

CanAlaska also holds the McTavish, Key Lake and Patterson uranium prospects – all in the Athabasca basin.

In neighbouring Manitoba, CanAlaska recently acquired the past-producing Manibridge nickel mine in the world-class Thompson Nickel Belt that has the potential for producing battery-grade nickel.

Its NE Manitoba uranium project is a joint venture with Northern Uranium Corp holding 70%. The project which hosts extensive surface uranium and rare earth showings is located in the Wollaston Group rocks in northern Manitoba.Â  The last drilling produced outlined intensive epithermal mineralizing events associated with the Maguire structural corridor.Â  The company also holds a NSR on the adjacent Kasmere property operated by East Resources Inc. which has flown an airborne survey.

The company has other properties in the Thompson Nickel Belt: Strong, Hunter and North Manibridge.Â  Fjordland Exploration Inc. can earn up to an 80% interest in CanAlaska’s 100%-owned North Thompson Nickel Project in Manitoba.

In northwest Saskatchewan, CanAlaska has the West Athabasca Diamond Project with over 80 kimberlite targets

The price of uranium has been rising steady recently and is now at US$30.60 per pound. Demand for uranium is slowly growing as new nuclear power plants come online. According to a 2019 WNA Nuclear Fuel Report, uranium demand from 2020 to 2030 will show a 26% increase in reactor capacity, mostly from new reactors with additional demand coming from Russia and China.

Peter Dasler,Â  P.Geo, is President and CEO and heads a team with extensive experience in uranium exploration. Cory Belyk, P.Geo is COO and brings 25 years Athabasca and world-wide experience with major uranium companies including Cameco. Dr Karl Schimann, a renowned geologistÂ (a key member of the team that discovered the massive Cigar Lake uranium deposit) is VP Exploration and has directed exploration teams in the Athabasca Basin for over 30 years. 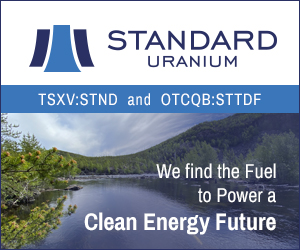 Standard Uranium Ltd. [STND-TSXV; STTDF-OTCQB; 9SU-FSE] is a relatively new uranium exploration company that began trading May 4, 2020 having completed a $4.5 million prospectus offering followed by a $3.4 million offering in October 2020.

The company’s flagship project is the +25,886-hectare Davidson River Project located in the southwest part of the prolific Athabasca basin of northern Saskatchewan, site of the highest grade uranium mines.

The southwest Athabasca basin has seen a number of uranium discoveries totalling over 400 million pounds in recent years by explorers such as Fission Uranium’s Triple R deposit, NexGen Energy’s Arrow deposit and the Cameco/Orano/Purepoint Spitfire Zone. 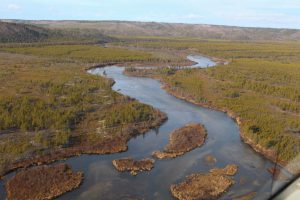 Between these discoveries and the Davidson River Project on trend to the west is north-northwest-trending Clearwater Domain, a geological feature thought to be a potential source of the uranium or the source of the hydrothermal system related to the uranium deposits. Exploration corridors east of the Clearwater Domain have had several recent major uranium discoveries. For example, the Patterson Lake Corridor hosts the Spitfire, Arrow and Triple R deposits. The Triple R deposit is approximately 25 km east of the Davidson River property.

Standard Uranium recently discovered corridors west of the Clearwater domain but until now has not been drill tested. Before going public, in 2018 and 2019, the company conducted VTEM, ZTEM and magnetic geophysical surveys that showed similar signatures to those associated with the Triple R and Arrow deposits.

The program is fully permitted and funded with the majority of drilling sites ground-accessible. The Phase II 2021program will be split into two segments where, a winter road-based drill program will follow-up on previous holes along the Warrior Trend, and the first ever drill testing of the Saint Trend. The second segment will comprise a summer fly-in program to drill test the Bronco Trend, which has also never been drilled.

The objective of the Phase II drill program is to make a high-grade uranium discovery by following-up on results from the inaugural Phase I drill program, and to begin exploration on untested corridors.

It won’t be necessary to build an exploration camp as the company is using the Big Bear Lodge on Grygar Lake as its base camp for the duration of the exploration program.

At the eastern side of the oval-shaped Athabasca basin, the company has three 100%-owned uranium prospects covering 13,216 hectares – Atlantic, Canary and Ascent. These prospects were acquired to cover conductive targets with anomalous uranium. IsoEnergy’s nearby Hurricane Zone returned recent results of 33.9% U3O8 over 8.5 metres. Little exploration will be needed before drill testing.

With outstanding project locations in the uranium-rich Athabasca and solid geological evidence of mineralization, Standard Uranium is in an excellent position for significant uranium discoveries.