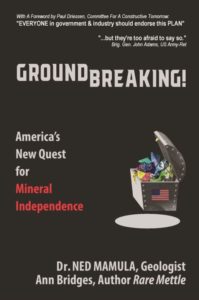 One of the many concerns of the U.S. federal government has been the country’s reliance on China, Russia and third world dictatorships for critical minerals heavily used in 21st-century smartphones, electric cars and advanced military weapons, even as America’s lands contain an ample amount of minerals.

This important topic has been addressed in a new book co-authored by geologist Dr. Ned Mamula and Silicon Valley author Ann Bridges who make a persuasive case for a resurgence in domestic mineral exploration and mining.

Just released, Groundbreaking! America’s New Quest for Mineral Independence, has received enthusiastic endorsements from a wide spectrum of people and organizations concerned about the consequences of America’s growing mineral dependence.

“While others have told important parts of the story, Mamula and Bridges have woven together myriad threads to give us the startling implications of our failed minerals policies,” according to the National Mining Association. “This book is a wake-up call. It’s past time to become secure again in our own mineral wealth.”

By comparing America’s mineral dependence to that of U.S. energy dependence on OPEC a few decades ago, Groundbreaking! points out America’s foolishness in not tapping into its own resources to control its own future.

Written for the layman to understand the decisions of government, industry, and environmental groups over many decades, it marries Mamula’s expertise with Bridges’ clear, down-to-earth narrative style, and delivers facts and examples so everyone from policymakers to college students can grasp the knotty problem in its entirety. It concludes with 16 specific recommendations to create a nationwide groundswell and develop consensus rather than the ongoing stalemate that allowed other countries to gain the upper hand in America’s political, economic, and even military disputes.

Dr. Ned Mamula is a senior geoscientist with experience in research, policy development, and the geopolitics of critical minerals. Ann Bridges is an acclaimed author of Silicon Valley novels based on her career in executive positions in technology and communications.

Groundbreaking! is offered in print and eBook formats at most major book sellers. It can be ordered by any retailer, but the ISBN is available on author Bridges’ website: https://authorannbridges.wordpress.com/pennedsource-production/ned-mamula/

The book is also available directly from Amazon for print copies, and in ebook format from a variety of vendors (Apple, Kobo as well as Amazon and more). Links to them are also found on the author’s website.