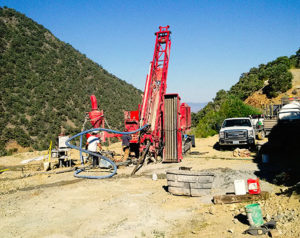 Walker River is a junior mining company with a focus on advancing high-grade, low cost mining opportunities into production. Lapon Canyon is the company’s flagship asset. Walker River says the project exhibits the potential for high-grade, vein-type gold mineralization as evidenced by past underground activities on the property.

The Lapon Project consists of 96 claims (1,940 acres) and is situated in the Wassuk Range where it is accessible by state roads. Walker River owns 100% of the properties, with a 2% NSR payable on 36 of the claims. The project is also located within the Walker Lane shear zone, a 100-km-wide structural corridor extending in a southeast direction from Reno, Nevada.

It is a trend that plays host to numerous gold, silver and copper mines, notably the Comstock Lode mines in Virginia City. It also hosts the past-producing Esmeralda/Aurora gold mine, with reported production of roughly one million ounces, and the Anaconda open mine copper mine in Yerington.

Small scale, high-grade mining began at the Lapon Project in 1914. Approximately 600 metres of drifts and raises were developed from two adits. The property also featured a two-stamp mill.  Further underground work was carried out, returning numerous assay values in the range of one oz/ton, with a sample at the end of an adit returning 20.6 oz/ton.

Additional work on the project in the following years included the installation of a ball mill and milling facilities.

Walker River recently said mineralization has been discovered in a broad, altered, fractured and brecciated northeast trending structural zone known as the Lapon Rose Zone. Anomalous gold values were denoted in many areas within this zone, and significant higher-grade mineralization over significant widths is located within sub vertical en echelon (step-like) zones of intense alteration and gold enrichment.

In 2018, exploration focused on infill and expansion drilling at the Lapon Rose Zone, as well as exploration and drilling new targets, including other fault alteration zones, which in some instances, show evidence of previous workings.

Significantly in Hole LC18-30 (referred to above), drilling intersected 93.5 g/t gold immediately prior to encountering old mine workings.

The company said these workings were intersected over 9.1 metres at a depth of 44.2 metres. “This continues to verify historical data of the positioning of previously reported workings, in presently inaccessible mined out areas,” the company said.

Consistently, since the start-up of drilling on the project, all holes drilled within the Lapon Rose Zone returned gold values with the majority (80%) returning significant grades and widths in en echelon zones of gold enrichment.

The Lapon Rose Zone has now been drilled over a strike length of some 365 metres, over a width exceeding 150 metres and a vertical extent of 400 metres.

Further results from the 2018 drill program are expected to be released shortly.