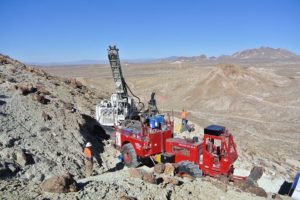 Hasbrouck is a joint venture held 75% by West Kirkland and 25% by Clover Nevada LLC, a wholly-owned subsidiary of Waterton Precious Metals Fund 11. When West Kirkland first acquired the property, it hosted two oxide gold-silver deposits and covered 13,000 acres. Another 3,700 acres have since been added.

The company says the Hasbrouck and Three Hills deposits are oxidized, low-sulfidation, epithermal vein systems that are suitable for open pit, heap leach mining. Both deposits have been extensively drilled by previous operators.

A 2016 pre-feasibility study indicates that the project is capable of producing 74,000 gold equivalent ounces annually for eight years, at an all-in sustaining cost of US$709 per ounce.

The study also indicates that initial capital of US$47 million could be used to build out the Phase-1 Three Hills Mine, which is fully permitted and shovel ready. Capital for the Phase-2 Hasbrouck Mine will come from free cash flow generated by operations at Three Hills, the company said.

The Three Hills and Hasbrouck deposits are eight kilometres apart.

West Kirkland has identified a significant new gold and silver target, at or near surface, on its 100%-controlled Gold Mountain mining claims, which were acquired in late 2017. Gold Mountain is located 1.6 kilometres east of Hasbrouck Peak, which is an economic distance for moving ore that might be found there to the heap leach facility planned at the Hasbrouck mine, the company has said.

The objective of West Kirkland’s exploration program in the district is to add gold resources and reserves near the company’s existing reserves within easy trucking distance from the currently planned and permitted heap leach processing facilities.

On Thursday, the company said four targets at Gold Mountain are planned to be drilled in the next phase of exploration. Drilling is planned with low cost, short holes, at depths of 30 metres to 60 metres, collaring in the mineralization.

If required, deeper drilling will be completed in the next round of drilling.