Gareth Thomas, President & CEO of Westhaven Gold, states: “We are pleased that two tranches of initial metallurgical test work undertaken by ALS Metallurgy Kamloops demonstrate high gold (average 95%) and silver (average 96%) recoveries from three quartz vein systems that comprise the South Zone. Mineralization is non-refractory and amenable to recovery by a standard industry process flowsheet. Results will support our maiden resource estimate on the South Zone, due in early Q1 2022.”

Westhaven prepared six composite samples for preliminary metallurgical work from archived jaw crushed coarse (>70% passing 2mm square mesh sieve) ‘reject’ drill core material associated with routine sampling activities. This crushed drill core should be sufficient for scoping level testing, but there may be some degradation in the performance of the samples during testing. Westhaven has collected additional drill core from the South Zone during 2021 and, once the maiden mineral resource estimate has been completed, this fresh uncrushed core would be available for additional metallurgical testwork beyond scoping levels. Samples ranged from 14.5 to 18.0kg each (combined total of 97 kg), with four composite samples submitted to ALS Metallurgy Kamloops from Vein Zone 1 mineralization, and one each from Vein Zones 2 and 3. Results of two tranches of test work completed in 2021 are compiled in the table and figure below. A point form summary of the two metallurgical test results is also provided. 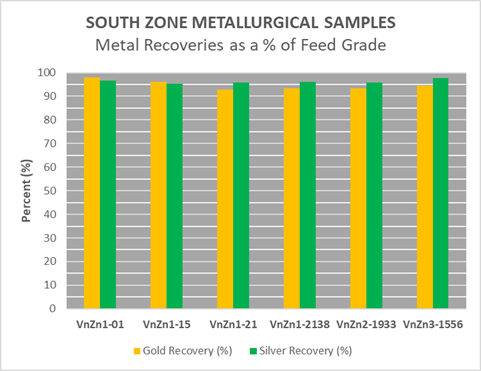 Two tranches of metallurgical testwork were undertaken by ALS Metallurgy Kamloops in 2021. Primary objectives of the first program (KM6326) were to:

The second program (KM6393) was conducted as a follow-up to the initial testing to assess finer primary grind sizings and additional flowsheet configurations using the remaining sample mass. The primary objectives of the second program were to:

Results of the two metallurgical programs are summarized below:

Recommendations for future testing include optimization of rougher tailings cyanidation conditions, cyanidation of rougher concentrates, cleaner flotation testing and a more extensive variability program – all of which would require larger masses of feed material – as well as confirming marketability of the final concentrate.

On behalf of the Board of Directors
WESTHAVEN GOLD CORP.

Peter Fischl, P.Geo., who is a Qualified Person within the context of National Instrument 43-101 has read and takes responsibility for this release. Results for the two metallurgical test programs were provided and approved by Robert Sloan, P.Eng, VP ALS Metallurgy Americas, a Qualified Person for the purpose of National Instrument 43-101. Westhaven’s ongoing Quality Assurance and Quality Control programs include auditing of all exploration data. Any significant changes will be reported when available.

Westhaven is a gold-focused exploration company advancing the high-grade discovery on the Shovelnose project in Canada’s newest gold district, the Spences Bridge Gold Belt.  Westhaven controls 37,000 hectares (370 square kilometres) with four 100% owned gold properties spread along this underexplored belt. The Shovelnose property is situated off a major highway, near power, rail, large producing mines, and within commuting distance from the city of Merritt, which translates into low-cost exploration.

Westhaven trades on the TSX Venture Exchange under the ticker symbol WHN. For further information, please call 604-681-5558 or visit Westhaven’s website at www.westhavengold.com.