Many people think Nevada has been picked over, and if there was something to be discovered, it would have been by now, but these properties were never any operator’s core assets, kind of a back of the closet thing.

Location, location, location, it’s as important in mineral exploration as real estate. So, if you’re out to discover a new mineral deposit, there’s no better place to start looking than close to a big one that’s already been found. Then the next thing to do is to hire the same people who found those nearby deposits in the first place, and that’s exactly what Westward Gold [CSE: WG] has quietly done in the heart of Nevada’s elephant country.

Then in July 2021, the company picked up another 3,872 acres (188 contiguous unpatented claims) immediately to the east, consolidating a 7,358-acre land package in the heart of Nevada’s historically prolific Battle Mountain – Eureka Trend. The trend is a 280 by 40-kilometer corridor known for hosting multiple large Carlin-style precious metal deposits and being considered one of the best gold mining districts in the world.

By August 2021, Westward Gold had a consolidated land package of underexplored property, 14-kilometers south of Barrick and Newmont’s Cortez Mine and about 22 kilometers south of Barrick’s North Pipeline Mine, two of the largest mines on the Trend. In addition, the properties are in the backyard of Barrick’s past producing heap leach Toiyabe-Saddle Mine to the south (the open pit mine operation produced a total of about 90,000 ounces of gold from 1987 to 1993).

“Many people think Nevada has been picked over, and if there was something to be discovered, it would have been by now, but these properties were never any operators’ core assets. So they’ve always been a kind of afterthought, with minimal exploration work done,” says Colin Moore, President of Westward Gold.

The two properties, named the Toiyabe Gold and Turquoise Canyon Projects, have been poked and jabbed by miners before looking for high-grade, near-surface deposits. Still, there has been no systematic large-scale exploration across both properties. 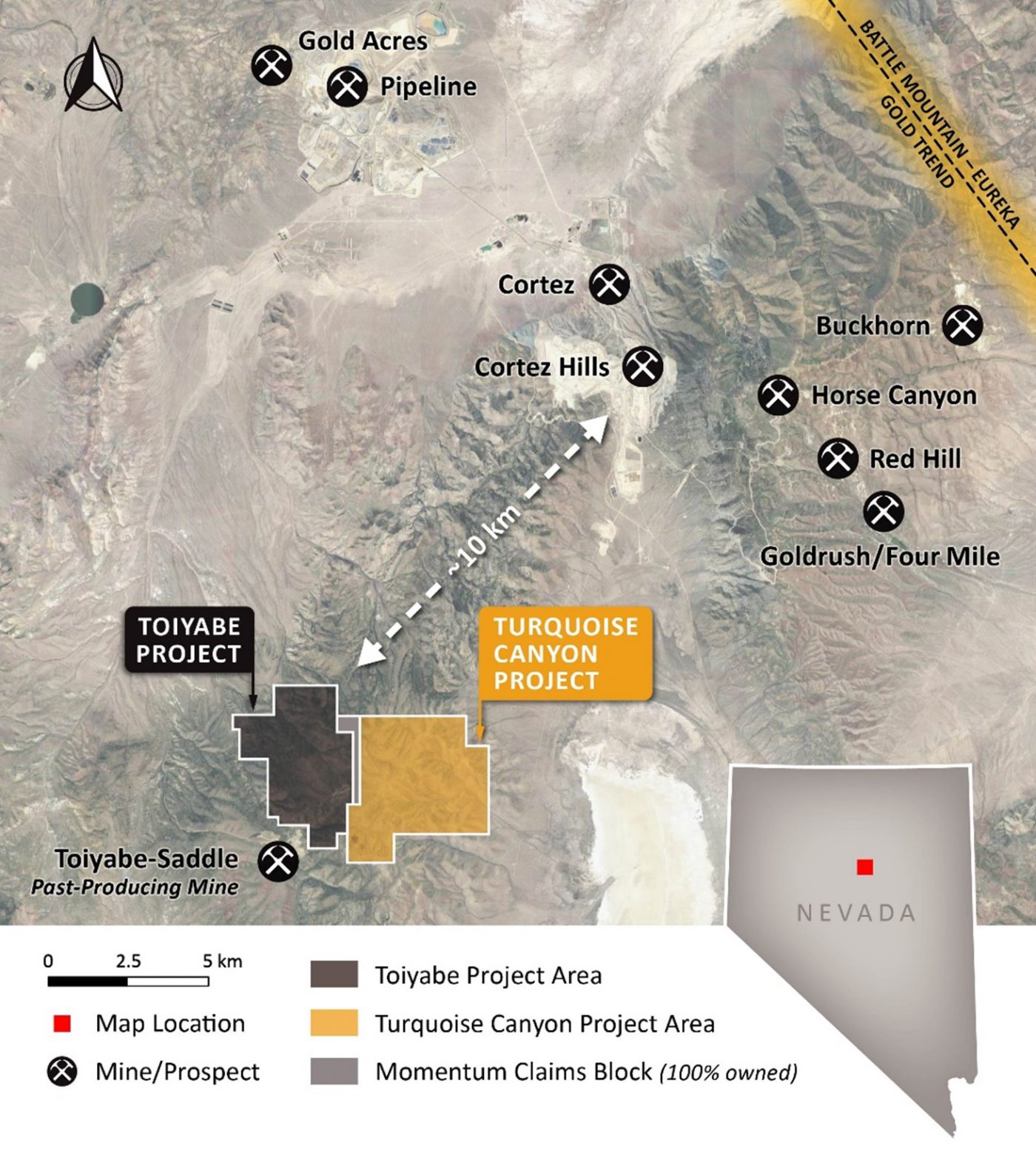 The Toiyabe Gold Project, which lies on the western side, is the more advanced of the two projects. There’s been activity here since the 1960s. Almost 370 holes were drilled, mostly on the southeastern portion of the property in what’s called the Courtney area. In 2009, a 43-101 technical report produced for American Consolidated Minerals Corporation identified a historical mineral resource of 4,975,000 tons at an average of 1.2 g/t, totalling 173,562 ounces of gold, but most of the drill holes were shallow, ending in mineralization, and this is where the Westward technical team believe the true opportunity lies.

“Part of our thesis here is that those nearer surface structures were fed by a larger deeper zone, which we’ll start looking at when we drill deep diamond drill holes next spring,” says Moore.

Right now, VP of Exploration, David Browning, a former senior geologist with TerraCore is using hyperspectral imaging technology to analyze almost 40,000 feet of historical drill core, (9,000 ft / 2,750 meters of diamond drill core and 30,000 ft / 9,150 meters of reverse circulation) and chips samples to better understand the stratigraphy, alteration, mineral presence, mineral chemistry, and mineral grain size. Â The results of the hyperspectral imagery will also be used as a comparative tool to infer any potential similarities to well-understood deposits in the district.

“We are fortunate to have access to the legacy core and chip samples, and we intend to gather as much information as possible from them. The work conducted on the property to date does not give us a fulsome understanding of the subsurface geology and structure; this analysis will build on that and serve well for future drilling campaigns,” says Browning.

Exploration on the Turquoise Canyon Project has been limited historically. There have been some surface activities, but no historical drilling and the theory is the gold zones discovered in the Courtney Area of Toiyabe may extend onto the Turquoise property right next door. So as a starting point, a fixed-wing airborne hyperspectral survey of the property with extensions from the eastern and southern boundaries (including Toiyabe) was recently completed and will analyze a 69-square-kilometre area in and around the land package. Â The survey should help find surface expressions of structures and surface alteration areas and help better understand the underlying structure of both properties.

One final project underway is a 17-kilometer induced polarization (IP) survey across six lines at the southwest portion of Turquoise Canyon and will complement two historical IP lines done by previous operators.

All the geological information gathered from the three programs will be collated and be used to identify potential targets for drilling in the first half of 2022.

The most important investment consideration after location for early-stage companies like Westward Gold is, who have you got on the team? In this case, CEO Raymond Harari, a merchant banker, and Colin Moore, President, a corporate finance professional and co-founder of Momentum Minerals, are at the helm of the Company. There’s also with some big hitters on the Board including Mark Monaghan, the founder and managing partner of Dalvay Capital Corp, David Kelly, a 30-year mineral exploration professional with a host of successes under his belt, Warren Beil, a corporate and securities lawyer and John Dewdney, the CEO of Crowsnest Advisory Service.

What should be of particular interest to investors is the four notable names on the technical advisory team assembled by Westward Gold. Dr. Chis Osterman, an exploration geologist with 40 years of experience in Nevada. Richard Bedell, best known as the co-founder of AuEx Ventures, credited for discovering the Long Canyon deposit later sold to Fronteer Gold and ultimately sold to Newmont Mining for $2.3 billion. Steven Koehler, a 30-year geologist with expertise in the Carlin and Battle Mountain – Eureka Trends in Nevada, has been directly involved in eleven Carlin-type gold discoveries, six of which have become producing mines. Notably, Mr. Koehler was Senior Geologist on the initial discovery team at nearby Cortez Hills, which was developed into a 10+ million-ounce gold deposit. Finally Dr. Alan Carter, the co-founder of both Peregrine Metals and Cuprum Resources, which were sold to Stillwater Mining and B&A Mineracao, respectively.

“We have put together a strong young management team with a solid mix of senior advisors with decades of experience finding mines. Many of our technical advisors wanted to be involved in this project. After seeing the technical reports and walking the ground, it’s led them to think there are a lot of similarities here to Barrick’s Cortez Hills deposit 10 kilometres away,” says Moore.

Systematic property-wide exploration takes time, but with these types of speculative projects, time and money go hand in hand.

Overall, the company’s in pretty good shape financially. The market cap is C$5.6 million with about C$1.1 million in the treasury (as of October 4, 2021).Â  There are 46.35 million shares outstanding, 5.2 million warrants priced at $0.25, and 4.2 million options, held mainly by management and advisors, so there’s still lots of room for raising equity without dilution, which Westward Gold will need to do to finance next year’s proposed exploration plan.

Westward Gold carries a light debt load. The company acquired the option to earn 100 percent ownership in the Toiyable Gold Project by issuing Starcore Mining International 4,100,000 common shares priced at $0.15 and a cash payment of US$150,000. Twenty-five percent of the shares were released three-months after the closing of the transaction, with another 25% every three months after that. In addition, Westward Gold is making an aggregate total payment to Minquest for a total of US$760,000 based on the following cash payment schedule.

Westward Gold expanded its Nevada footprint in July by acquiring Momentum Minerals and its option to earn a 100% ownership position in the Turquoise Canyon Property. The all share transaction saw approximately 19,817,400 IM Exploration shares issued to the shareholders of Momentum Minerals.

According to Moore, in an ideal world, next year would have Westward Gold with boots on the ground conducting a 2-phase drill program with 4-5000-metres of combined program reverse circulation and diamond drill holes on targets selected based on this year’s field activities.

“We will likely need to go back to the market In the coming months and would be looking for a small financing to complete next year’s planned drill campaign,” says Moore.

“I like to say that we’re Nevada’s best-kept secret. We’ve been heads down over the summer, building the team and executing on our exploration plan, so in a way, this fall will be our coming out party. I’m confident we’ve done the right work this year and I view Westward Gold as a growth story, and a value play right now,” says Moore.