Images to accompany this news release can be found atÂ http://whitegoldcorp.ca/investors/exploration-highlights/.

“We are very pleased with the abundance of gold mineralization encountered at Vertigo to date, highlighted by the presence of multiple high-grade structures which continue to remain open in all directions. These results validate the Vertigo target to be a structurally controlled mineralized zone forming part of a regional-scale system, including the recently discovered Sabotage, Topaz, North Frenzy and multiple other gold targets across our JP Ross property. To date at least 10 gold targets have been identified over a 250km2 area on the JP Ross property, with Vertigo being the first to have received follow up diamond drilling,” stated David D’Onofrio, Chief Executive Officer. “These results have provided valuable insight into the nature and geometry of the mineralization and a better understanding of the local geology. These results in addition to previously completed regional exploration have also provided increased confidence in our methodologies as well as the potential for additional discoveries as our exploration team continues to explore the other targets on the JP Ross and our other properties. We look forward to the results from the exploration performed to date on these other targets and following up on the success of this program.”

Mineralization at the Vertigo is hosted within a network of WNW trending, moderate to steeply south dipping, shallow structures that are subparallel to topography. Individual structures are typically up to 3m and host high-grade mineralization associated with quartz veining, brecciation, and strong sericite-quartz alteration with local fine-grained visible gold, disseminated to locally massive arsenopyrite, galena, chalcopyrite and pyrite. The high-grade intervals pinch and swell both laterally and vertically with the strongest mineralization occurring where the structures cross lithologic contacts; particularly fine-grained amphibolite and felsic gneiss. The high-grade mineralization occurs within broader envelopes of lower grade mineralization (<0.1 g/t Au) that define a SE plunge to the overall system. The system also appears to have been cut by at least 3, late, NE oriented structures which have locally truncated and offset the mineralization. To date the drilling has defined the system approximately 300m along strike, 200m in width, and 275m down-dip. The system is open along strike and down plunge to the SE with strong potential for expansion.

A total of 9,568m of diamond drilling over 46 holes was completed on the Vertigo in 2019. The drilling was conducted over 2 Phases, as discussed below, with a focus on defining the geologic and structural controls on mineralization in the area and follow up drilling on significant mineralized zones as warranted.

Phase 2 of diamond drilling at Vertigo was to follow up on drill holes completed on the fences mentioned above, in an effort to refine geology and continuity; along the west-northwest structural trend.Â  The holes are discussed below in numeric order, with their positions referenced to Holes xD0005 and xD0006 which were drilled beneath the original Vertigo discovery trench (Trench2) from pad VER19-A/B. All holes were drilled at an azimuth of 020Â° degrees with the exception of hole xD0050, which was drilled at an azimuth of 200Â°. Assay values for individual samples for the reported intercepts ranged from trace to 32.5 g/t Au. There is not enough information to estimate true thickness of the intercepts at this time.

The below table consists of new diamond drilling results from the Phase 1 fence drilling completed in 2019. 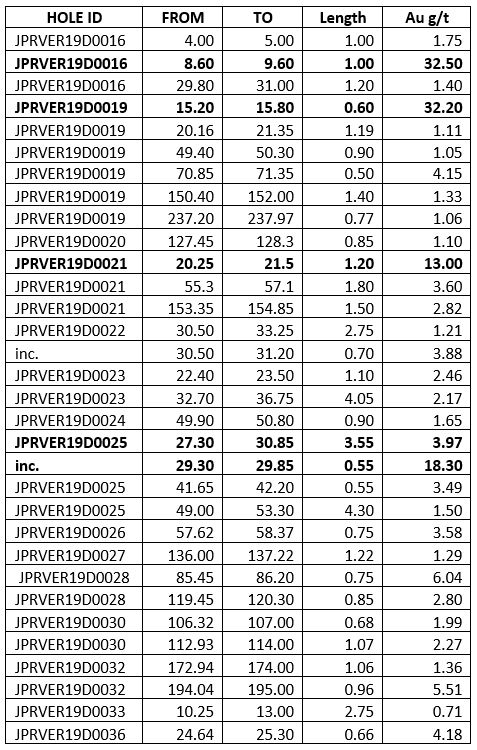 The below table consists of diamond drilling results from the Phase 2 targeted drilling completed in 2019. 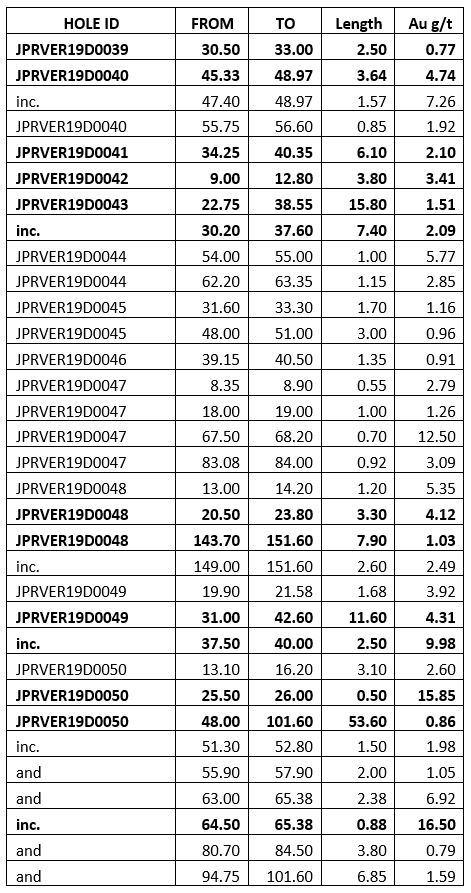 The reported work was completed using industry standard procedures, including a quality assurance/quality control (“QA/QC”) program consisting of the insertion of certified standard, blanks and duplicates into the sample stream.

About White Gold Corp.
The Company owns a portfolio of 21,207 quartz claims across 33 properties covering over 422,730 hectares representing over 40% of the Yukon’s White Gold District. The Company’s flagship White Gold property has a mineral resource of 1,039,600 ounces Indicated at 2.26 g/t Au and 508,800 ounces Inferred at 1.48 g/t Au. Mineralization on the Golden Saddle and Arc is also known to extend beyond the limits of the current resource estimate. Regional exploration work has also produced several other prospective targets on the Company’s claim packages which border sizable gold discoveries including the Coffee project owned by Newmont Goldcorp Corporation with a M&I gold resource(2) of 3.4M oz and Western Copper and Gold Corporation’s Casino project which has P&P gold reserves(2) of 8.9M oz Au and 4.5B lb Cu. For more information visit www.whitegoldcorp.ca.

(2) Noted mineralization is as disclosed by the owner of each property respectively and is not necessarily indicative of the mineralization hosted on the Company’s property.

Jodie Gibson, P.Geo., Technical Advisor, and Andrew Hamilton, P.Geo., Exploration Manager, for the Company are each a “qualified person” as defined under National Instrument 43-101 Standards of Disclosure for Mineral Projects, and each has reviewed and approved the content of this news release.

These forward-looking statements are based on reasonable assumptions and estimates of management of the Company at the time such statements were made. Actual future results may differ materially as forward-looking statements involve known and unknown risks, uncertainties and other factors which may cause the actual results, performance or achievements of the Company to materially differ from any future results, performance or achievements expressed or implied by such forward-looking statements. Such factors, among other things, include; expected benefits to the Company relating to exploration conducted and proposed to be conducted at the Company’s properties; failure to identify any additional mineral resources or significant mineralization; the preliminary nature of metallurgical test results; uncertainties relating to the availability and costs of financing needed in the future, including to fund any exploration programs on the Company’s properties; business integration risks; fluctuations in general macroeconomic conditions; fluctuations in securities markets; fluctuations in spot and forward prices of gold, silver, base metals or certain other commodities; fluctuations in currency markets (such as the Canadian dollar to United States dollar exchange rate); change in national and local government, legislation, taxation, controls, regulations and political or economic developments; risks and hazards associated with the business of mineral exploration, development and mining (including environmental hazards, industrial accidents, unusual or unexpected formations pressures, cave-ins and flooding); inability to obtain adequate insurance to cover risks and hazards; the presence of laws and regulations that may impose restrictions on mining and mineral exploration; employee relations; relationships with and claims by local communities and indigenous populations; availability of increasing costs associated with mining inputs and labour; the speculative nature of mineral exploration and development (including the risks of obtaining necessary licenses, permits and approvals from government authorities); the unlikelihood that properties that are explored are ultimately developed into producing mines; geological factors; actual results of current and future exploration; changes in project parameters as plans continue to be evaluated; soil sampling results being preliminary in nature and are not conclusive evidence of the likelihood of a mineral deposit; title to properties; and those factors described in the most recently filed management’s discussion and analysis of the Company. Although the forward-looking statements contained in this news release are based upon what management of the Company believes, or believed at the time, to be reasonable assumptions, the Company cannot assure shareholders that actual results will be consistent with such forward-looking statements, as there may be other factors that cause results not to be as anticipated, estimated or intended. Accordingly, readers should not place undue reliance on forward-looking statements and information. There can be no assurance that forward-looking information, or the material factors or assumptions used to develop such forward-looking information, will prove to be accurate. The Company does not undertake to release publicly any revisions for updating any voluntary forward-looking statements, except as required by applicable securities law.