Lithium has shown the mining world that clean energy can also be very profitable. Stocks of lithium producers and explorers have been on a tear since November, many up hundreds or even thousands of percent. All driven by projected demand for this metal in the lithium ion batteries that drive green-energy devices like the electric car.

But lithium isn’t the only metal benefiting from the renewable energy revolution. Cobalt is also an indispensable part of lithium ion batteries—used in nearly equal proportions as lithium itself within these devices. That puts cobalt at the heart of green energy. A fact that metals buyers around the world are taking notice of judging from recent London Metal Exchange (LME) statistics.

Monthly data released by LME this month showed that trading in cobalt exploded over the last two months. With November volume reaching 1,600 trading lots, and December trading even higher at nearly 2,800 lots—compared to less than 500 lots trading monthly during the first ten months of 2016.

Cobalt-focused stocks are also getting a lot of attention. With investor attention propelling developers like eCobalt Solutions [ECS-TSX] to 45% gains during the first weeks of January trading. Cobalt thus appears like a strong candidate for the next green metal boom. So the question is: where in the world can miners and explorers find it?

Historically, the answer has been West Africa. This is a place where one nation—the Democratic Republic of Congo (DRC)—produces 51% of the world’s cobalt supply, as shown in the chart below. 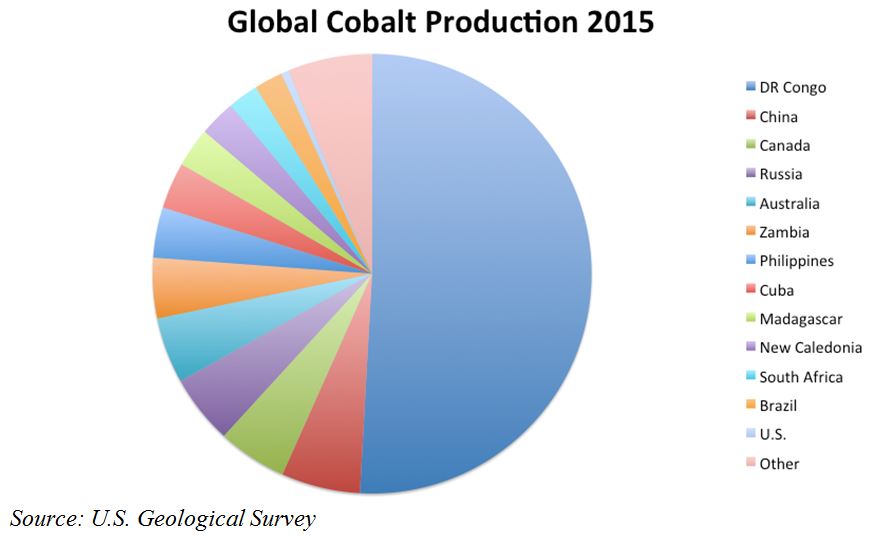 Companies like Katanga Mining [KAT-TSX] have benefited from the DRC’s cobalt endowment. In the first nine months of 2016, that company produced over 2,900 tonnes of cobalt as by-product of copper mined from the rich African Copperbelt.

Cobalt coming as a by-product of other metals is a common story globally. Canada is also one of the world’s leading cobalt producers, with the bulk of production here coming in association with copper and nickel in places like the storied Sudbury mining district of Ontario.

In other cases, cobalt comes alongside more exotic metals like gold and bismuth—the array that occurs at Fortune Minerals’ [FT-TSX] NICO deposit in the Northwest Territories.

That deposit could actually become one of the world’s newest sources of cobalt, after recently receiving full permitting for mine construction. The company is now looking for off-take partners, and should have a growing audience judging from recent trading in the cobalt market.

Far fewer producers globally hold primary cobalt deposits—ones where this critical metal isn’t simply a by-product of other production. In fact, development firm eCobalt Solutions estimates that only 2% of worldwide output comes from primary cobalt mines. The company sees that lack of straight-up cobalt production as an opportunity. Management plans to fill that primary supply gap through its Idaho Cobalt Project, where cobalt is the main product.

A 2015 preliminary economic assessment on the project showed that a full 70% of projected revenues will come from the sale of cobalt (along with a small amount of copper and a pinch of gold). At the time of that report, a cobalt price of US $10.29 per pound was modeled, giving the project a post-tax net present value of $113 million.

That bodes well for the future development of this unique deposit, given that cobalt prices have rocketed to US $15 per pound over the past year. The project has already received environmental permits, and management expects financing of the projected $147 million capital costs to be completed during the first half of 2017.

Ontario is another place getting attention as a potential primary producer of cobalt. The province holds numerous small but rich mines—so many in fact that the town at the centre of this district is actually named Cobalt. The Cobalt, Ontario mining camp holds some associated metals like silver, which triggered a mining rush here in 1903. But cobalt became the main target during World War II when miners supplied this industrial metal to the war effort. Many companies mined silver-cobalt ores including the highly successful Teck Resources Silverfields Mine which lasted until 1983. A few others worked at other properties in the area until the mid-1980s.

Companies like Cruz Capital [CUZ-TSXV] are now moving to resurrect this historic district. This firm holds four projects across Ontario, in addition to a portfolio of cobalt projects in British Columbia and Idaho. A number of the Cruz projects such as Hector and War Eagle are past-producing mines. The really eye-catching thing is the grade of this cobalt mineralization, with samples running up to 13%.

Considering that most cobalt deposits globally grade less than 1%, the potential looks good for Ontario to provide some of the highest-grade production worldwide. Such output would be very welcomed if the cobalt market continues to rise with the green-power wave breaking today.