Uranium has been the ultimate contrarian investment in recent years. 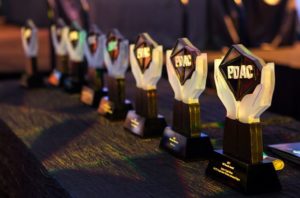 But that hasn’t prevented NexGen Energy Ltd. [NXE-TSX, NYSE] from emerging as one of the prize winners at this year’s Prospectors and Developers Association of Canada Convention (PDAC) in Toronto.

NexGen officials will pick up the 2018 Bill Dennis Award at The PDAC Awards Gala at the Fairmont Royal York Hotel, Tuesday, March 6.

NexGen is a well-funded exploration and development company with a portfolio of high-impact projects across the Athabasca Basin. Its portfolio is centred in the southwest Athabasca Bain where the company holds 259,000 hectares of ground. The area is home to the high grade Arrow deposit, which was discovered in February, 2014.

Subsequent drilling has established Arrow as the largest undeveloped uranium deposit in the Athabasca Basin, which already ranks as one of the most prolific uranium camps globally.

Based on a maiden preliminary economic assessment (PEA) released in 2017, Arrow will conceptually be the world’s largest uranium mine.

The PEA has determined that after tax, Arrow has a net present value of $3.9 billion and an extraordinary Internal Rate of Return of 56.7% based on a uranium price of US $50 a pound. It is worth pointing out here that spot uranium is currently trading at US $21.75 a pound.

However, the average operating cost estimate is relatively low at US $6.70 per pound of U3O8 over the life of the mine. The payback period is estimated at 1.1 years.

In an explanatory note outlining why NexGen won the award, PDAC points out that the province of Saskatchewan stands to benefit significantly from the development of Arrow, reaping $2.98 billion in royalties over the life of the mine.

This year, NexGen plans to update the resource model and release a prefeasibility study through advanced geotechnical, metallurgical, engineering, and environmental baseline studies.

Meanwhile, Arrow remains open in most directions, and at depth. As NexGen is aggressively stepping out with drilling, it is possible that this already huge deposit could get bigger.

Ted Reeve takes the Distinguished Service Award for his invaluable volunteer contributions to PDAC as a Convention Planning Committee member for 16 years, and session chair.

Golden Star Resources [GSC-TSX; GSS-NYSE AMERICAN] won the 2018 Environmental & Social Responsibility Award for exceptional community relations, commitment to sustainable development, and support for employees and local businesses at its two producing gold mines in Ghana. The Toronto-based company is committed to minimizing its environmental footprint at the Wassa and Prestea mines, especially in areas of water management, and rehabilitation, PDAC said. Since operations commenced in 1999, the company has installed more than 200 clean water supply systems to serve local communities, doubling the proportion of households with access to clean, pipe-born water to at least 30%.

Lana Eagle wins the 2018 Skookum Jim Award for her contribution to Canada’s mining industry by working diligently to bridge the divide between Indigenous communities and both junior and major companies.

Lana Eagle is a member of the Whitecap Dakota Nation in Saskatchewan. She has devoted her career to building relationships between the mining industry and Indigenous communities

Jean Descarreaux wins the 2018 Special Achievement Award for founding the Quebec Mineral Exploration Association (AEMQ) and developing the mineral exploration sector in Quebec. Descarreaux is a founding member of Claude Resources, which Was purchased by SSR Mining Inc. [SSRM-TSX, NASDAQ], formerly known as Silver Standard Resources, for $337 million in 2016. He died in March, 2017 at the age of 76.

Don Taylor, Chief Operating Officer at Arizona Mining Inc. [AZ-TSX] won the 2018 Thayer Lindsley Award for the discovery of the Taylor lead-zinc-silver deposit in Arizona. In early 2017, the company released a preliminary economic assessment (PEA), confirming that Taylor is a world class base metal deposit with further potential to grow. That was after the company released a maiden resource of 39.4 million inferred tons, grading 11% zinc equivalent in 2016. The estimate was based on 25 holes.  The mine is expected to be in production in 2020.

IAMGOLD Corp [IMG-TSX, IAG-NYSE] and Sumitomo Metal Mining Co. Ltd. have won the 2018 Viola R. MacMillan Award for demonstrating leadership in the financing and management of one of Canada’s largest undeveloped gold projects. In June, 2017 Sumitomo Metal Mining bought a 30% interest in the Cote Gold Project in northeastern Ontario from IAMGOLD for US $195 million. Cote is now expected to be the first new major open pit gold mine to be developed in northern Ontario in over five years. It is expected to produce an average of 320,000 ounces of gold per year over a 17-year life span when it enters production in 2021.