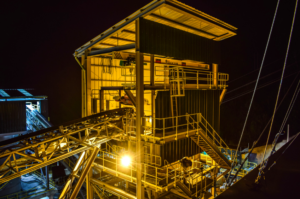 Antioquia Gold Inc. [AGD-TSXV, AGDXF,OTCQX] said Tuesday it has successfully started production at its Cisneros mine in Antioquia, Colombia.

Cisneros is located 55 kilometres northeast of Medellin and covers 5,630 on 10 concessions. The property hosts a structurally controlled mesothermal lode gold system within the Central Cordillera belt of Colombia, an area with a history of artisanal gold production.

More than 60 artisinal gold mines have already been identified on the Cisneros property.

In February 20, 2018, the company said it had received a National Instrument 43-101-compliant preliminary economic assessment (PEA) report for the project, which included an updated mineral resource estimate of 728,603 tonnes of measured and indicated material with an average grade of 5.389 g/t gold. On top of that was 536,211 tonnes of inferred resources with a grade of 6.345 g/t gold.

The objective of the metallurgical process was to obtain gravimetric concentrates and flotation concentrates in a plant with a capacity of 500 tonnes per day.

“The company has been testing and optimizing the processing plant over the last two months and has successfully completed the ramp up schedule,” said Antioquia President and CEO Gonzalo de Losada. “Recovery rates and concentration ratios are within the estimated design parameters for this phase and we will continue to optimize in the coming weeks.

Antioquia Gold has been exploring the Cisneros project since 2007 and has made nine individual gold discoveries. The processing plant will be fed by ore from two of those deposits, the Guayabito and Guaico deposits.

The mineralized material processed during the ramp up process was obtained from the stockpile resulting from the development of the Guayabito and Guaico mines.  However, the company said the stockpiled from these areas is lower grade than expected grades over the life of the mine.

The Guayabito deposit is a multi-zone, en-echelon style deposit with individual zones achieving strike lengths of 180 metres, depths of 300 metres and localized true thicknesses of up to 5.0 metres. The Guaico deposit is similar to Guayabito.

Antoquia Gold said it has identified six other exploration targets on its Cisneros land package using geochemical sampling and geophysics that have a similar signature to the Guaico-Guayabito are. The company intends to continue exploring and to start drilling using cash flow from mining operations.