Metallis Resources Inc. [TSX-V: MTS; OTCQB: MTLFF] is pleased to announce the second set of assay results from the Company’s 2018 drilling program at its 100%-owned Kirkham Property in the prolific Golden Triangle of northwest British Columbia. The first ever drill program at the Cole and Nina targets totalled 1,645 meters (“m”) of diamond drilling and resulted in the discovery of two new porphyry systems. The drilling assays at the Cole target also included the discovery of a high-grade gold zone containing 11.18 g/t Au over 7.7m including 137 g/t Au over 0.6m.

• KH18-18 (Cole) intersected porphyry style mineralization in shallow quartz stockwork zones and sulphides carrying 0.94 g/t Au over 9m and 0.42 g/t Au over 10m. Alteration patterns in the core, geology and geophysics all vector towards a mineralized system to the southeast.

• KH18-20 (Cole) was drilled along and across the Adam fault cutting through a series of 4-9m gold intercepts ranging from 0.40 to 0.74 g/t AuEq, associated with similar centimeter-scale massive sulphide veins as in KH18-19.

• KH18-17 (Nina) discovered a new porphyry copper-gold system 1-km to the north of the Cliff target. This major step out hole intersected 180m of mineralized Hawilson Monzonite (“HM”) and breccias highlighted by 17m of 0.33 g/t AuEq and 2m of pristine potassic alteration with 0.34% Cu and 0.25 g/t Au.

A summary of the Cole assay results are tabulated below (Table 1). 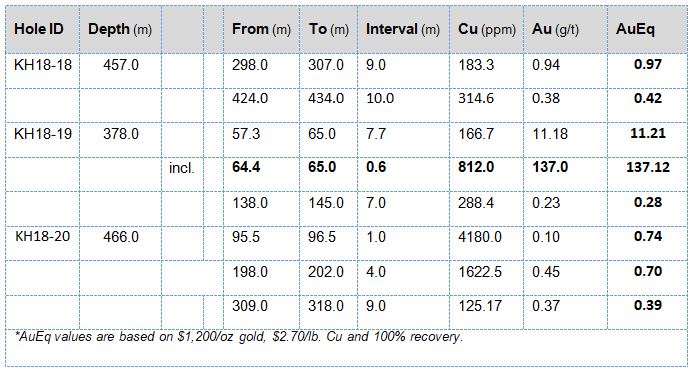 The Cole target is represented by a north-south trending dike swarm of HM intrusions and hydrothermal breccias within a (1000m x 800m) zone of sericitic alteration with intense gossans and Cu-oxides correlated with historic litho-geochemical values ranging from 0.2% to 5.0% Cu and up to 20.7 g/t Au. The first pass drilling at Cole demonstrates that the HM porphyry dikes transition outward into gold-bearing massive sulphide and epithermal sheeted veins to the West and additional porphyry potential to the East (See Figures 1 & 2).

The 137 g/t gold intercept from KH18-19 is associated with a massive sulphide pyrrhotite-pyrite vein adjacent to the Hawilson Monzonite as part of a late stage hydrothermal event. This high-grade gold vein is open in all directions and is correlated both structurally and geochemically to a massive sulphide vein, 300m down dip in KH18-18 (See Fig 3 – cross section). The high-grade gold veins in KH18-19 are similar to the Intrusion-Related Au Pyrrhotite Veins found in Snip gold mine, which produced 1.1 million ounces of gold at an average grade of 27.5 g/t from 1991 to 1999. (MINFILE (2015): Snip, 104B 250; BC Ministry of Energy and Mines)

Nina is represented by extensive (400m x 300m) zone of sericitic alteration and north-south trending Hawilson Monzonite dikes. The first and only drill hole at Nina intersected the tip of an intense potassic alteration zone with 0.34% Cu and 0.25 g/t Au over 2 m and 15 m of hydrothermal breccia carrying 0.41 g/t AuEq mainly in silicified and sulphide-rich matrix. The drilling assays at Nina confirmed the continuity of a 4-km long Cliff-Nina porphyry corridor allowing Metallis to expand on the known gold-rich mineralization at the Cliff porphyry system (MTS News Release Oct-29, 2018).

Metallis’ Chief Geologist – Abdul Razique, PhD., P.Geo. – a porphyry expert, commented: “A new model has emerged from the 2018 drill program where the dike swarm of HM porphyry intrusions transition outward into sheeted massive sulphide and epithermal veins”. Dr. Razique added “this model has opened up a multitude of avenues of exploring gold-rich mineralization at shallow depths and deeper potassic cores all along the Hawilson Monzonite Complex.”

President and CEO Fiore Aliperti commented, “The 137 g/t high grade gold intercept at shallow depth at Cole is an important discovery for Metallis and its shareholders. The discovery of intrusion-related gold veins similar to those at the historic Snip Mine remain open in all directions and provides strong potential for further high-grade gold mineralization at the Cole target”; he went on to add “this area of interest is adjacent to the newly discovered Au/Ag rich epithermal vein at the Etta target, 200 meters away and offers the opportunity to test both targets efficiently. We intend to follow up aggressively next season to build on these results.”

Additional information, including field and core photographs can be viewed on the from Company’s website at www.metallisresources.com

The analytical results of the drill core and rock samples from Thunder North Targets are still pending and will be disclosed when those results have been received, reviewed and interpreted.

Metallis Resources Inc. employed a rigorous QA/QC program to ensure best practices in sampling diamond drill core. A combination of 1-3 meters intervals of sawn HQ and NQ drill core were delivered to ALS Limited’s facility in Terrace BC, where the samples were crushed to 70% pass 2mm fraction, and then a 250g split was pulverized to better than 85% passed a 75-micros screen. The geochemical analyses were performed by ALS Limited in Vancouver using multi-element 4-Acid digest ICP-MS package (ME-MS61). Gold was analyzed by fire assay technique Au-ICP21. Higher gold grades (>10 g/t) were analyzed by fire assay and gravimetric finish. In addition to the internal QAQC program by ALS, Metallis inserted 10% lab certified standards, field blanks and duplicates into the overall sampling stream. ALS Limited is a global testing, inspection and certification business with facilities and laboratories in dozens of locations and is independent of the Company.

Technical aspects of this news release have been reviewed and approved by David Dupre, P.Geo., designated as a qualified person under National Instrument 43-101.

About the Kirkham Property

The 106 sq. km Kirkham Property is located about 65 km north of Stewart, B.C., in the heart of the Golden Triangle’s prolific Eskay Camp.  The northern border of Kirkham is contiguous to Garibaldi Resources’ E&L Nickel Mountain Project.  The northeast corner of Kirkham is within 12 km of the Eskay Creek mine while the eastern border is within 15 – 20 km of Seabridge Gold’s KSM deposits and Pretium Resources’ Brucejack mine.

Metallis Resources Inc. is a Vancouver-based company focused on the exploration of gold, copper, nickel and silver at its 100%-owned Kirkham Property situated in northwest British Columbia’s Golden Triangle.  Metallis trades under the symbol MTS on the TSX Venture Exchange and currently has 32,986,079 shares issued and outstanding.

Metallis Resources Inc. was included in the 2018 Venture 50 (the “V50”). The V50 is a ranking of top performers on the TSX Venture Exchange each year and is published early in each following year. The ranking comprises 10 companies from each of five industry sectors selected based on three equally weighted criteria: Market capitalization growth, share price appreciation and trading volume amount. To view the V50 video click here.

On behalf of the Board of Directors: