British Columbia’s Golden Triangle is one of the world’s hottest exploration and mining districts right now. This region boasts an incredible endowment of mineral riches combined with one of the world’s most mining-friendly and politically stable jurisdictions; an increasingly important factor of late.

The project is called Treaty Creek and is part of the same large hydrothermal system as Seabridge Gold’s KSM deposit (the largest undeveloped gold project in the world by reserves) and Pretium’s Brucejack Mine (one of the highest-grade mines in the world).  The deposit is called the Goldstorm, and it continues to be open in all directions and at depth.  Remarkably, it’s only one of several potential mega-deposits on the property. 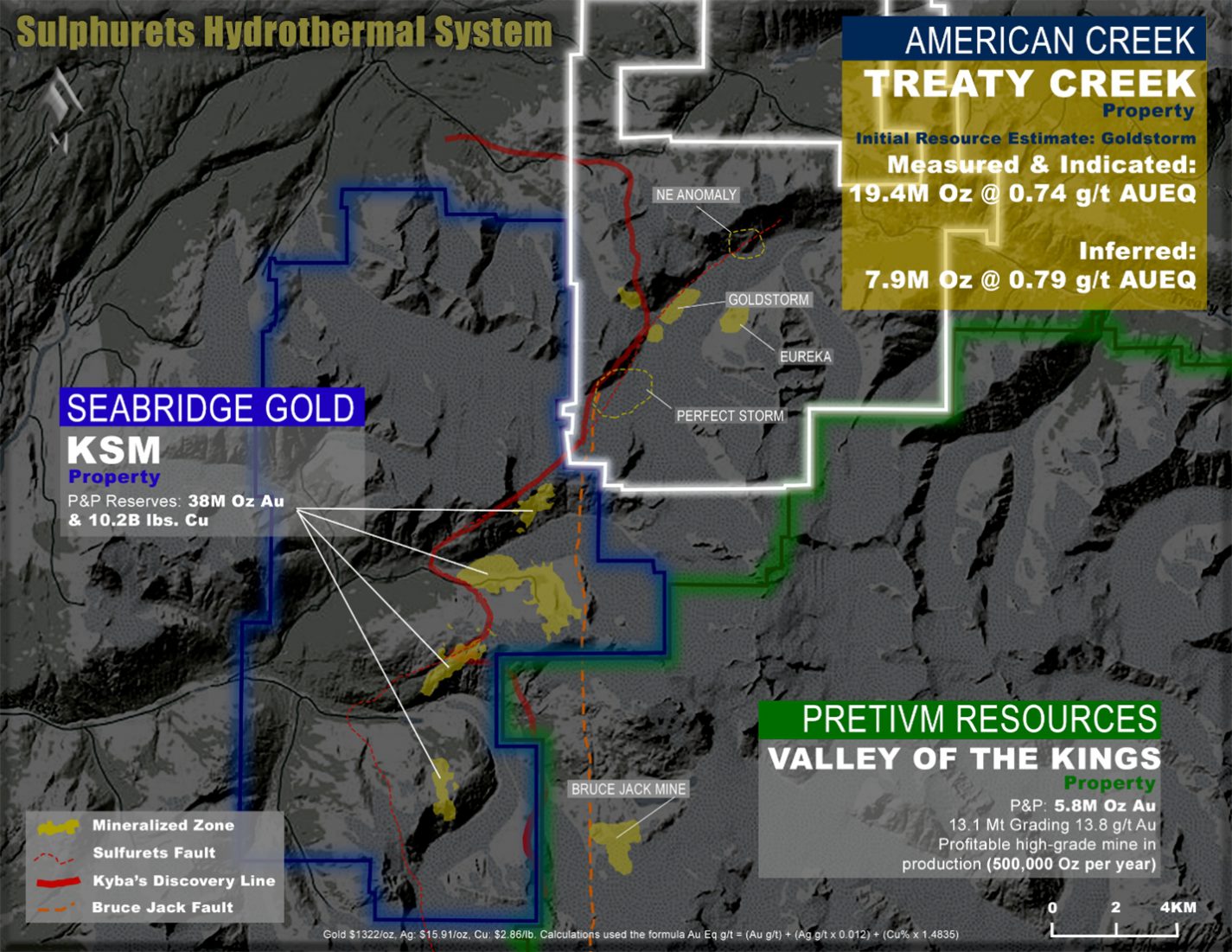 While the Goldstorm contains deep roots of mineralization, it’s the first 300-400m from surface (300 zone) that is critical.  The 300 zone is a gold enriched area with numerous significant intervals at 1.5 -3 times the average grade of the overall deposit, creating potential to shorten a Cap-X payback period.

While current drilling is concentrating on moving the close to 8 million ounces AuEq of Inferred resources over to Measured & Indicated and expanding the overall size of the Goldstorm, it is only part of the comprehensive program utilizing up to six drills.

The Perfect Storm Zone, located on Treaty Creek approximately 2.5Km SW of the Goldstorm, has the same type of geological and geophysical markers as the other deposits found in the Sulphurets Hydrothermal system, including the Seabridge KSM deposits.  However, the geophysics is showing the potential for the Perfect Storm to be an even larger deposit than the Goldstorm.  Drilling to test this target, along with the Eureka and NE Anomaly may take place this year after the primary objectives at the Goldstorm are met.

With an initial resource in March 2021 exceeding Eric’s expectations and tremendous expansion taking place in the early stages of the 2021 program, it’s not surprising that Conor O’Brien, portfolio manager at Sprott Mining, recently stated:

“… there’s 30 million ounces, on its way to 50, sitting there in BC… it definitely remains a very attractive stock for us, and we’re very, very happy to be sticking with it.”

These comments are only concerning the Goldstorm which is only one of several potential mega-deposts at Treaty Creek.  As pointed out by Eric Sprott, this project is clearly in the Discovery Stage, where the biggest profits are made within the lifecycle of exploration and mining.

Timing is everything in the metals industry, and right now Tudor Gold is currently undervalued  compared to its pre-resource highs, considering the scale and potential of the project, and the $5.29 target price given them by Fundamental Research Corporation back in March 2021.

There is a way to increase that leverage within this project even further as the former operator and JV partner, American Creek Resources, is currently trading at a discount to the value of their 20% fully carried interest.  As the agreement implies, American Creek is getting a full ride on all costs until a Production Order is produced.  Should the project be sold prior to that, American Creek would incur no exploration or advancement costs. 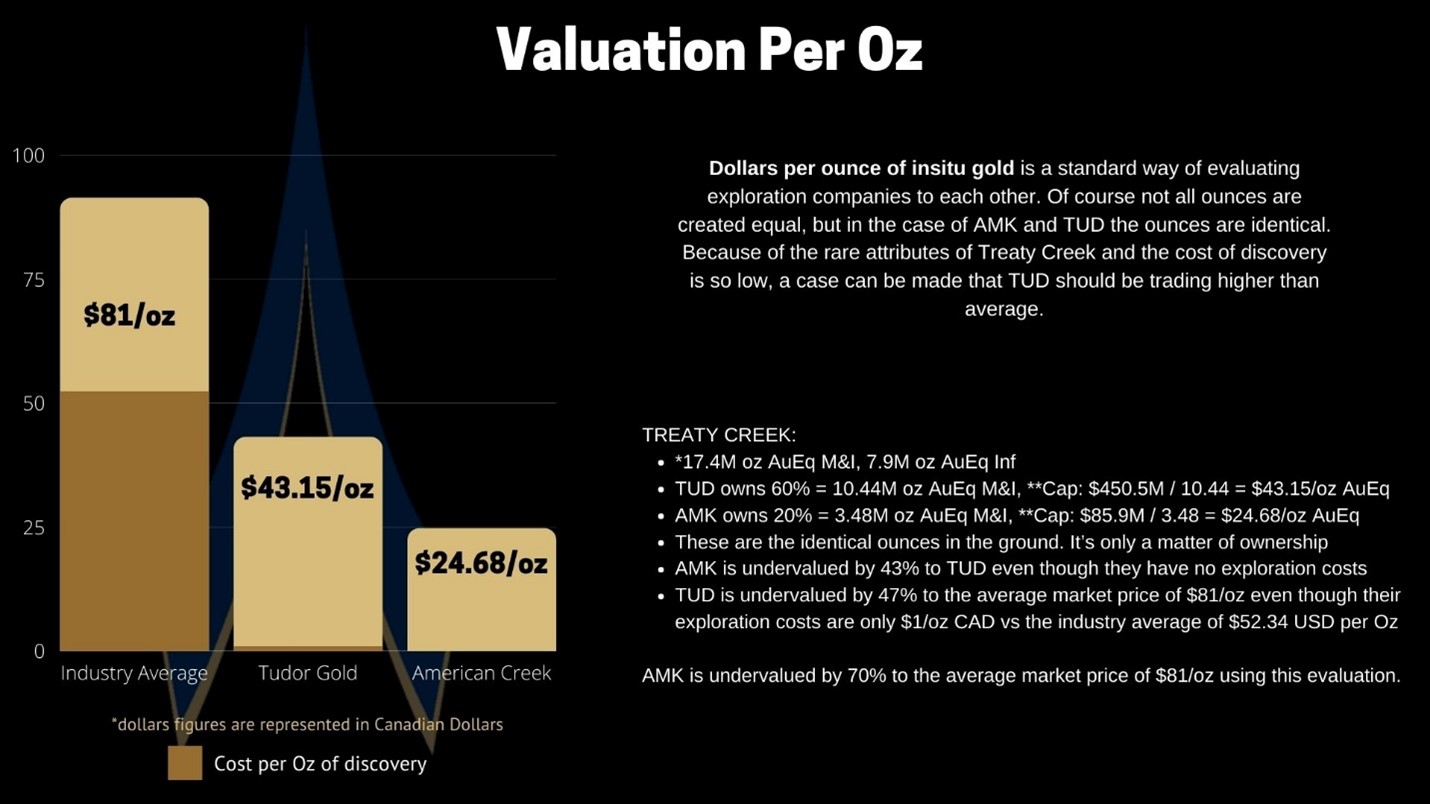 American Creek’s and Tudor’s ounces are the exact same ounces in the ground.  It’s only a question of ownership, and American Creek’s discovery cost at Treaty is $0/oz gold!  At current market prices, investors could almost double their leverage with this play by taking a position in American Creek and benefitting as the project advances and Tudor’s value increases.

With exceptional drill results already being reported on the project and gold historically strengthening in the fall, now is a strategic time to investigate what has the potential to become one of the world’s largest gold deposits in a politically stable jurisdiction with excellent logistics.

Tudor Gold’s Vice President of Exploration and Project Development, Ken Konkin, has worked in the Golden Triangle for 30 years.  In particular, he was the head geologist for Pretium while putting the Brucejack mine (just south of Treaty) into production in 2017.  Konkin goes into detail on Treaty Creek and the 2021 program in this recent interview.

Concerning his first two years of drilling and the massive initial resource calculation at Treaty Creek, he stated: “This is just the first chapter of a very good book!”

With the first two rounds of 2021 drill results now in, it’s exciting to see that the second chapter is getting even better than the first.