N’tsi Tatay, more widely known as the Windy Craggy Project, is one of North America’s largest resources of cobalt with excellent copper, zinc, gold and silver grades hosted in an Upper Triassic Besshi-style volcanogenic massive sulphide. It is located in the northwestern corner of British Columbia within a regional scale volcano – sedimentary basin, termed Alta Basin, which is a mineralized belt that has the potential for future discoveries. Other known sulphide prospects occur within 15 km of N’tsi Tatay. 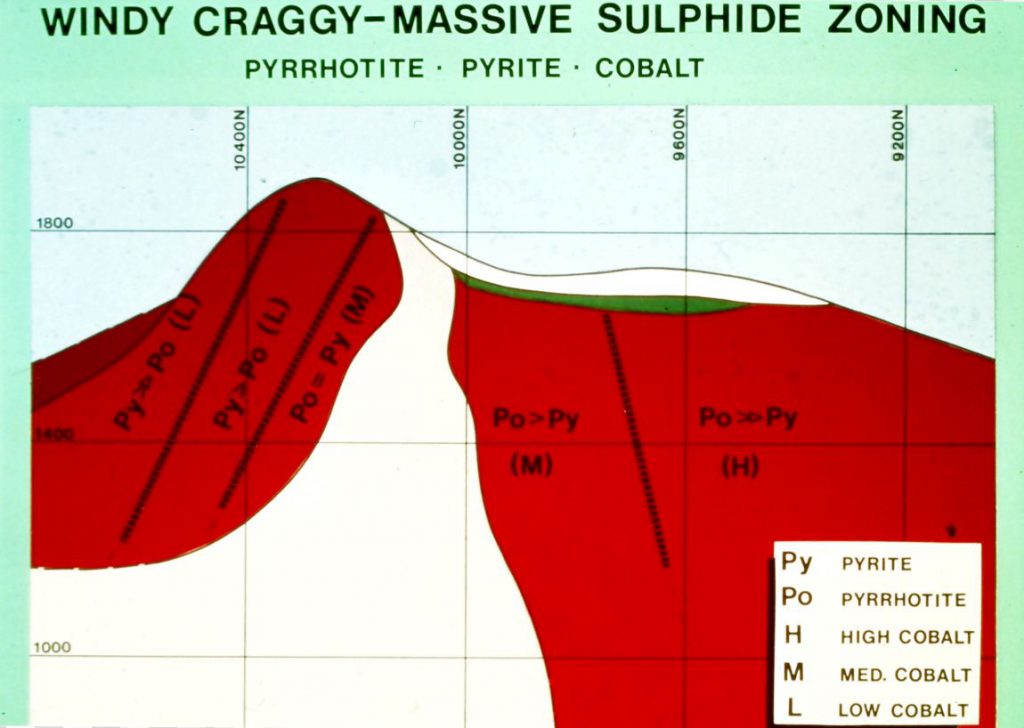 The Windy Craggy Property is estimated to contain a total metal value to be worth in excess of US $31 billion based on May 27, 2020 metal prices.Â This does not include the known zinc resource.

Approximately $50,000,000 in expenditures from 1988 – 91 included 4,139 metres of underground development, 64,618 metres of drilling from surface and underground diamond drill holes and the completion of a preliminary feasibility study.

N’tsi Tatay was discovered in 1957 by prospecting under the supervision of James McDougall (an inductee into the Canadian Mining Hall of Fame in 2006). After years of highly successful exploration the project was shuttered by inclusion into a park (1993) by provincial and federal politics without due recourse and consultation to the land claims and ancestral rights of the rightful Indigenous First Nation people. This event led to hundreds of millions of dollars raised by mining related companies leaving Canada and being employed elsewhere in the world. This also entrenched a pessimistic view of investment in Canada and elsewhere where politics can shutter resource development at any time and without due regard to the rights of Indigenous people.

Cobalt in particular is a metal absolutely critical in battery storage for electric vehicles as well as other storage applications. It has been deemed a Critical Metal by the USA and Canada. When combined with the fact that 65% of the world cobalt metal is sourced in the Congo, not a country known for its stability or transparency, but rather known for its abuse of child labor and human rights violations, is it not our responsibility to ask ourselves if we made a mistake locking up a high quality, North American source of cobalt that could be mined and processed with strict environmental standards and appropriate human rights and labour controls so that cobalt is ethically sourced.

Recent innovations in recovery technology, mine development, block caving, cemented back fill paste and dry stack tailings storage techniques, along with world environmental management and mitigation strategies offer opportunities for the sustainable and environmentally responsible development of the N’tsi Tatay deposits in ways which were not envisioned when the deposit was put into the park. Other such new and innovative technologies would include onsite power via runoff river hydro and wind power as well as full reclamation plan and design of facilities for present and future use (ie post-mining).

Combined with the recognition and implementation of United Nations Declaration on the Rights of Indigenous Peoples (UNDRIP) in Canada, this high quality resource deserves another look after nearly 30 years of being locked away in hastily established park – especially when we consider where and how the majority of cobalt comes from today. It is hard to imagine that we should not consider N’tsi Tatay as an ethical and critical source of cobalt to be used to create a non-carbon and cleaner future.

There are numerous social, labour (jobs), tourism, education (training), fishing (ie salmon enhancement) and economic shared direct and indirect benefits from this development for all Indigenous Nations, as well as all levels of governments in Canada and the United States. This leads to Indigenous economic self-sufficiency.

This is the time in which to showcase a vision of development with ownership and leadership by an Indigenous Nation entity that respects their culture, the environment, park sustainability and economic realities.Â  This would give meaningful and respective commercial license and social licence to operate.

Bruce W. Downing, MSc., PGeo, FGC, FEC(hon) is a consultant who has been involved with Windy Craggy since 1975 to present and was Project Geologist from 1989 to 1991.

Rick Van Nieuwenhuyse, MSc., is mining executive who foundedÂ NovagoldÂ Resources and Trilogy Metals. He is currently President and CEO of Contango Ore Inc. and working with the Tetlin Alaska Native Tribe to develop the Peak Gold deposit in Alaska.