Aben Resources Ltd. (TSX-V: ABN) (OTCBB: ABNAF) (Frankfurt: E2L2) (the “Company”) is pleased to provide results for the final five drill holes (FK17-05 to 09) from the 2017 Phase-one drill program at the Forrest Kerr Gold Project located within the Golden Triangle region of British Columbia. The latest drill results continue to reveal the near-surface high-grade gold mineralization present at the underexplored Boundary Zone and demonstrate that the area has immense potential for new discoveries. 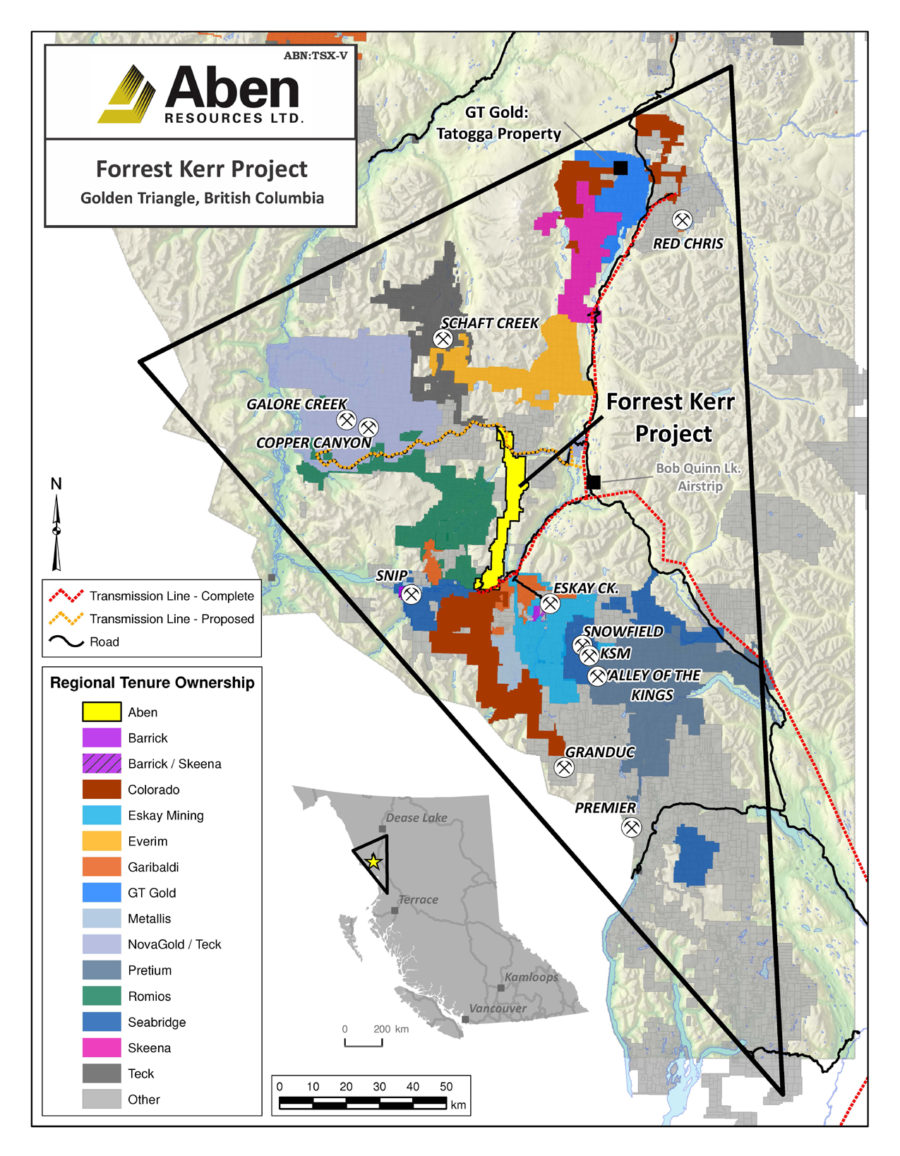 Continuous mineralization identified at the newly discovered “Boundary North Zone” in three holes that tested a broad zone of alteration and structural preparation; 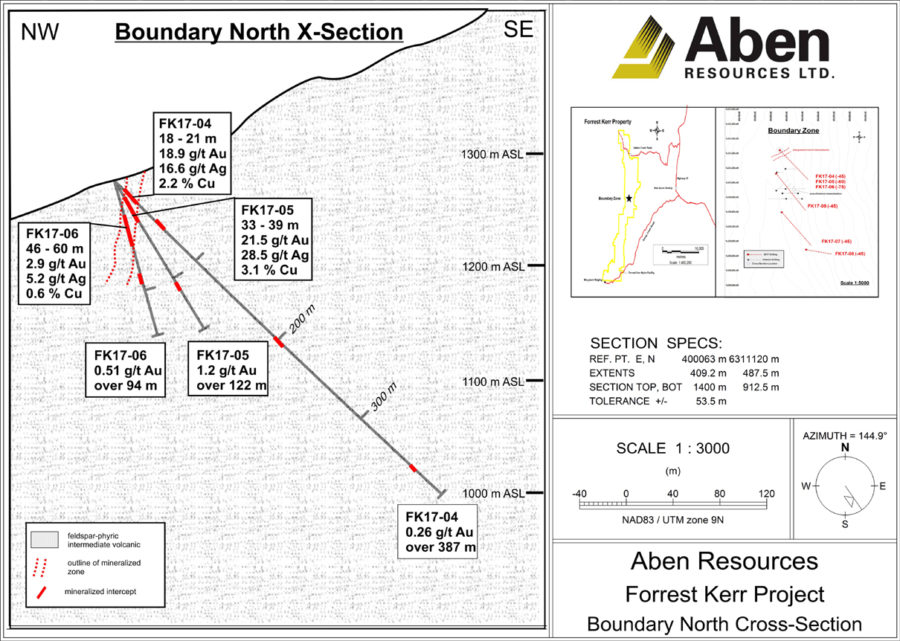 Holes FK17-05 (-60 dip) and 06 (-75 dip)  were collared from the same pad as the previously reported FK17-04 (-45 dip)  (October 4, 2017 news release) which returned 0.26 g/t Au over 387.0 metres including 10 metres of 6.7 g/t Au, 6.36 g/t Ag, 0.9% Cu and 3.0 metres of 18.9 g/t Au, 16.6 g/t Ag and 2.2% Cu. The mineralized zone encountered in these three holes represents a near-surface, high-grade discovery comprised of strong quartz and quartz-carbonate veining with well-mineralized breccia horizons. The zone displays a high degree of continuity for gold, silver and copper mineralization and is open to the East, West, North and down-dip. 2017 drilling has shown that base and precious metal mineralization is combined in both a high grade core and across broad intervals. A summary of select drill intercepts can be viewed in the table below.

FK17-09 (collared 160 metres south of holes 04, 05, and 06) transected an area of historic drilling including  drill hole RG91-16 which returned 33.4 g/t Au over 11 metres including 326 g/t Au over 0.5 metres. FK17-09 encountered many discrete base and precious metal mineralized horizons not listed in the table above. This hole was drilled on an azimuth of 140 degrees (SE) in order to both test the historically reported gold grades and determine if a locally interpreted  mineralization trend of NE-SW held true. While we have confidence that the interpreted mineralized trend was supported by the drill results, a hole drilled in the opposite direction (azimuth 320) from the same pad would test for the potential strike extension of the strong mineralization encountered in  holes 04, 05 and 06.

The Boundary Zone shows strong evidence that a robust hydrothermal system and laterally extensive fault and shear network related to the regional Forrest Kerr Fault combined to form a large scale mineralized system on the property. Drill core from all of the holes at the Boundary Zone has been variably quartz-sericite-pyrite (QSP) altered with local chlorite overprint and widespread episodic quartz and quartz-carbonate veining with subordinate brecciation. The high grade gold and silver mineralization encountered in the first three drill holes at North Boundary represent an exciting new target for further exploration. In addition, some of the most widespread and highly anomalous gold-in-soil anomalies remain untested over an area that extends in excess of 2 kilometres southward from the 2017 drill locations.

Aben CEO Jim Pettit states “We feel this initial drill program has given the Company tremendous encouragement toward future exploration on our Forrest Kerr Property. The success to date confirms our belief that the discovery of the Boundary North Zone could represent a sizable mineralized hydrothermal system. The Boundary Zone was given the highest priority in terms of potential targets on the Property based on a compilation of historic data completed after the land package was assembled. Given the new and historic high-grade mineralization and numerous untested gold-in-soil anomalies we look forward to returning to the property next year to continue our exploration in order to unlock the full potential of the Boundary Zone.” 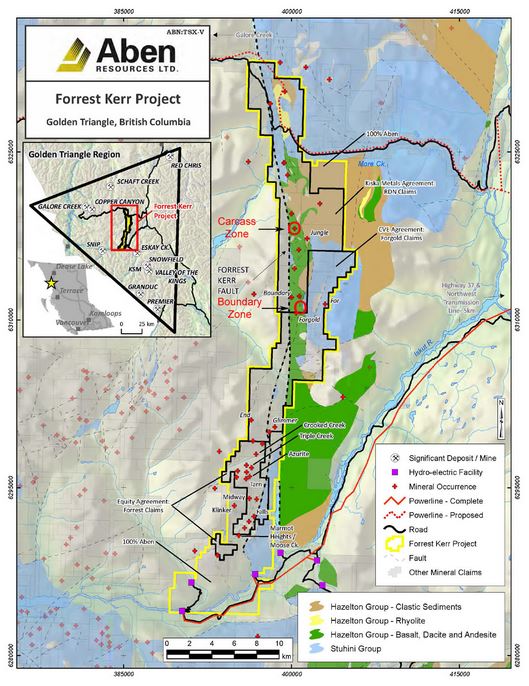 The Forrest Kerr Property represents a consolidation of the RDN, Forgold, Forrest and various Aben-controlled claims that comprise 23,397 hectares in the Golden Triangle area of British Columbia. Aben has agreements in place that give them exclusive right to  earn a 100% interest in the various properties. Historic exploration work on the property over the last three decades has produced a database that includes over 120 drill holes, 2100 rock and 18,000 soil samples. A majority of the work was completed in the early 1990’s after the discovery of the nearby Eskay Creek mine spurred an exploration boom in the area. Very little activity has been recorded on the claim group in the past decade, a period of time that has seen vast improvements in local infrastructure with the construction of the 277 megawatt Northwest hydro-electric facility, located on the southern portion of the property. In addition, all-weather road access to both the northern and southern portions of the property is available from the paved provincial Stewart-Cassiar Highway #37.