Argentina Lithium & Energy Corp. (TSX-V: LIT, FSE: OAY1 (WKN: A0RK7E), OTC: PNXLF), is pleased to announce that it has acquired a 100% interest in, or has under application, mineral rights totaling 23,700 hectares covering the entire Incahuasi Salar and basin in Catamarca Province, Argentina.  The salar is situated within the “Lithium Triangle” of Argentina and Chile, and has characteristics prospective for lithium-rich brines.   Initial sampling of near-surface brines has returned up to 409mg/L lithium, and geophysical surveying indicates the potential for lithium-rich brines at depth.

“This acquisition provides the Company and our shareholders full control of an exciting new project that covers the entire salar basin,” said Nikolaos Cacos, President and C.E.O. “Our technical advisors are very optimistic about the potential and we are moving forward with a detailed program to identify and quantify subsurface brines.”

The Company is now in the process of planning a detailed exploration program at the project.

The Salar de Incahuasi is located in the northwest of Catamarca Province at approximately 3260 metres above sea level, in the southern half of the “Lithium Triangle”. Access to the Incahuasi salar is by gravel road, approximately 34 kilometres southwest from the town of Antofagasta de la Sierra.  The salar is approximately 17 kilometres long north to south, and 2.5 kilometres wide, and divided into a north and south section.  The geological environment at Incahausi is similar to other salars in the Puna region where lithium and potash are found. The northern portion is flatter, partially covered with surface water, with crusts of halite and ulexite.  The central part of the salar has a slightly lower altitude, causing surficial waters to converge in this area. The southern portion of the salar is covered by terrigenous sediments including sand, clays, halite and sodium-sulphates.  Additional information on the geology of the salar will be available on the Company website shortly.

The project currently consists of 13,711 hectares in seven properties covering 90% of the existing salar surface.   These properties are wholly-owned by the Argentine subsidiary of the Company, with no royalties.  Applications have been made for approximately 10,000 hectares of additional property, which will complete the coverage of the salar to the south and extend the Companies holdings to cover the entire basin to the north.

To date the company has completed reconnaissance surface sampling of 52 pits, geological mapping and a geo-electrical survey.  A total of 52 samples of brine were collected along 15 kilometres of the long axis of the Salar, covering an area of approximately 2800 hectares. 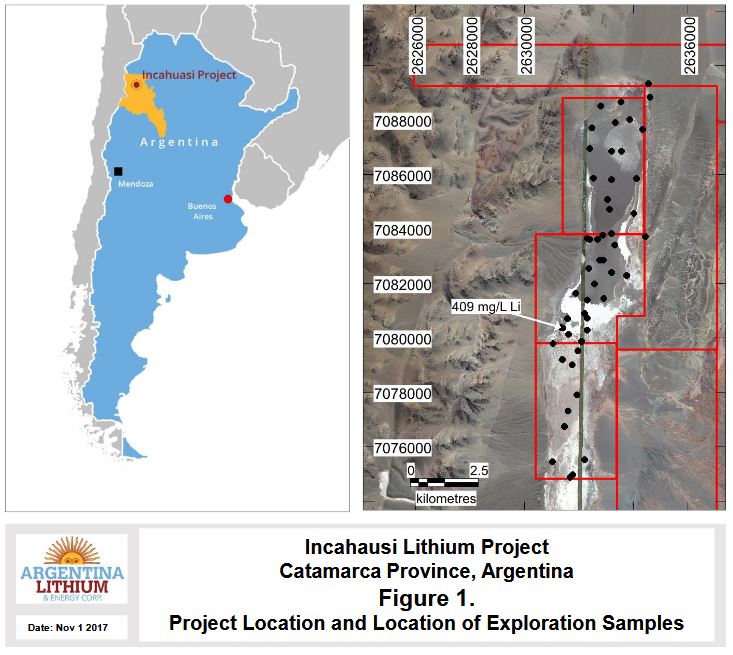 Pits were dug by hand or using an auger to a maximum depth of 8 metres in order to access near-surface brines.  Once contacted, brine was allowed to flood the pit and was then sampled from the depth of the resulting water level. The overall samples average is 62 mg/L of lithium and 4661 mg/L of potassium, with a maximum value of 409 mg/l lithium and 1.56% potassium from a sample in the central portion of the salar. Magnesium is high in all samples, with an average grade in the 52 samples of 9800 mg/L. As such, the Company is consulting with its technical advisors, including Dr. Daniel Galli, on recovery opportunities for magnesium carbonate along with lithium and potassium products. Sample locations and results are compiled in Table 1:  https://argentinalithium.com/assets/news/2017-11-tab-1-h7peap.pdf.

The geo-electrical survey at Incahuasi was completed by Geofisica Argentina S.A., an experienced local company. The method uses resistivity to characterize the hydrogeological conditions of the salar, including conductive and semi-conductive zones interpreted to be clastic and/or fractured evaporitic sedimentary layers that may contain brines bearing lithium and potash.  A total of 69 Vertical Electrical Soundings (VES) were done along nine east-west lines cross-cutting the entire salar. The survey shows extremely low resistivity bodies of -0.1 ohm-m, corresponding to extremely high conductivity in some cases starting at surface and extending up to 200 metres deep.  These are interpreted as potentially significant brine aquifers. In several pseudo-sections high conductivity zones (in blue) were detected below the present alluvial fans and terrigenous sediments, opening the possibility of brines below them, an example of which is shown in Figure 2: https://argentinalithium.com/assets/news/2017-11-fig-2-h7peap.pdf.