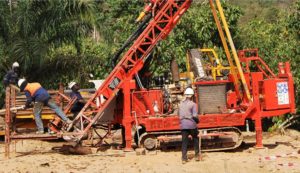 An August 2017, an option agreement with Alecto Minerals PLC, an AIM-listed public company, gave Ashanti the right to earn a 100% interest in the Kossanto East Gold Project, located in western Mali. The purchase price was $1 million, and Alecto retained a 1.5% net smelter return royalty interest, which Ashanti had the option to repurchase for $100,000 per each 0.1% NSR purchased.

As the government of Mali has a carried 10% interest in all minerals and mining concessions in Mali, the 100% interest will be a net interest of 90% for Ashanti Gold, the company said at the time.

When that agreement was reached, Ashanti already held an option to acquire a 65% stake in the project upon completion of a feasibility study.

Kossanto is a 66.4 km2 concession located along the Mali-Senegal border on the prolific Kedougou – Kenieba Inlier, the northwestern most exposure of Birimian rocks in West Africa. It also lies near the intersection of two major shear zones associated with numerous multi-million ounce gold deposits.

Ashanti said 40 million ounces of gold has been discovered in this area over the past 20 years, resulting in the construction of eight new mines.

One of the other target areas (Berola) has been tested with shallow Rotary Airblast Drilling (RAB) and returned positive, first pass intercepts.

On Wednesday, the company said two drilling rigs have been mobilized and will be drilling both diamond core and reverse circulation holes to provide sufficient information to develop a robust geological interpretation and mineral resource estimate to be completed in the third quarter of 2018.

Ashanti says it has been able to select optimal drill locations for resource estimation. It is anticipated that several holes will test newly established anomalies to the north, east and southwest of Gourbassi East and Gourbassi West. Drilling is expected to start in May, 2018.