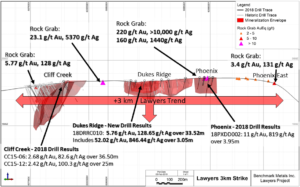 Benchmark Metals Inc. [TSX-V: BNCH, OTCQB: CYRTF, WKN: A2JM2X] – is pleased to report drill results from the Dukes Ridge Zone at the Lawyers Gold & Silver Project, located in the Golden Triangle region of British Columbia, Canada. Drill-holes intersected wide, bulk-tonnage intervals of near 1 g/t gold equivalent and narrower intervals of high-grade gold-silver mineralization. The drilling has expanded the resource area and indicates that the mineralization is open along strike and down-dip.

CEO John Williamson commented, “The new drill results provide bulk tonnage drill intercepts that envelope high-grade gold-silver veins from surface. These results will significantly expand the overall size of the Dukes Ridge Zone that remains open for additional step-out drilling in 2019. This, in combination with results of previous and planned drilling at the Cliff Creek, Dukes Ridge and Phoenix mineralized zones, is leading to a significant increase in the existing estimate of mineral resources at the Lawyers Project. Previously described as discreet mineralized zones, evidence is growing to suggest that these zones may be interconnected with continuous mineralization over a +3km strike length, representing the heart of a mineral resource with significant potential for expansion along the major NW-SE oriented Lawyers Trend.”

Results from the Dukes Ridge Zone are part of the +3 kilometre Lawyers Trend that lies between the Cliff Creek and Phoenix zones and forms part of an existing Mineral Resource Estimate.  Please refer to the Company website for a depiction of the +3 kilometre Lawyers Trend, encompassing exploration zones Cliff Creek, Dukes Ridge, Phoenix and Phoenix East, with excellent potential for continued expansion.

Drilling in 2018 has expanded the potential resource area, indicating gold-silver mineralization with a total strike length of at least 530 metres that is open at depth below 80 metres. A total of 1304.24 metres in 13 shallow drill-holes were completed at Dukes Ridge near surface, with 6 holes grading above 1 g/t AuEq over intervals of greater than 10 metres. This drilling included 961.64 metres of reverse circulation (RC) and 342.60 metres in two diamond drill (DD) holes. Drill-hole 18DRRC010 intersected 5.76 g/t gold and 128.65 g/t silver across 33.52 metres and includes 52.02 g/t gold and 846.44 g/t silver across 3.05 metres (see results table below).

The Dukes Ridge Zone is delineated by drilling, surface soil and rock sample results, potassic alteration and radiometric geophysics. All geological indicators provide potential to extend and connect Dukes Ridge up to 600 metres northwest with the Cliff Creek Zone. In addition, Dukes Ridge has potential for a 100 metre southeastern extension connecting it with the Phoenix Zone and extending beyond to Phoenix East, as well as potential for 600 metres of eastern extension defined by soils and radiometric anomalies. The combined zones represent the +3 kilometre Lawyers Trend.

During the 2018 program, a high-grade rock sample was collected northwest of Dukes with 32.1 g/t gold and 5,370 g/t silver between the Dukes Ridge Zone and the Cliff Creek Zone. An anomalous area to the northwest is supported by radiometric signatures and will be drill tested in 2019.

At the Dukes Ridge and Phoenix zones, 3.9 kilometers of soil lines were completed in 2018, providing 144 samples over an area of 0.5 square kilometers. A total of 60 rock grab samples were collected along the trend of the Dukes mineralization (including samples from the Phoenix and Phoenix East zones), with 18 of these samples grading above 1 g/t gold equivalent. The mineralization at Dukes Ridge occurs over broad intervals with strong pervasive silica and adularia alteration of polymictic breccias, and also as discrete veins and breccias (typically with higher grades) that are more similar in style to the Cliff Creek and Phoenix mineralization. Benchmark is interpreting a large-scale Airborne Geophysical Survey that will provide detailed targeting data for the 2019 exploration program.

The Dukes Ridge Zone has an inferred mineral resource estimated to be 58,000 tonnes grading 4.30 g/t Au and 139.13 g/t Ag, which equates to a contained metal resource of 8,000 oz. Au and 260,000 oz. The Cliff Creek, Phoenix and AGB zones were brought into production briefly from 1989-1992 by Cheni Gold Mines, however the Dukes Ridge Zone has not been mined. The areas which were mined were accessed via multi-level underground developments. 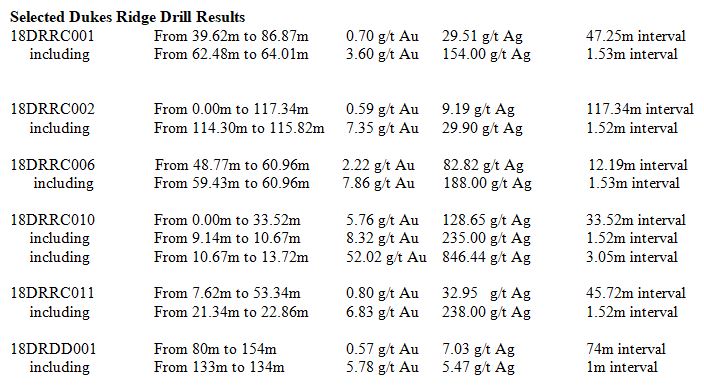 The location map provides drill hole locations, demonstrating potential to expand the existing gold-silver mineral resource. Map(s) and images can be viewed at the Company’s website. The Company is encouraged by its maiden drill campaign, particularly initial drilling results at the Dukes Ridge Zone and the recently announced Phoenix Zone (Jan. 11, 2019). The Company believes that the 2018 drilling in combination with follow-up drilling in 2019 will provide additional mineral resources along the Lawyers Trend.

Results from samples were analyzed at ALS Global Laboratories (Geochemistry Division) in Vancouver, Canada (an ISO 9001:2008 accredited facility). The sampling program was undertaken by Company personnel under the direction of Rob L’Heureux, P.Geol. A secure chain of custody is maintained in transporting and storing of all

samples. Gold was assayed using a fire assay with atomic emission spectrometry and gravimetric finish when required (+10 g/t Au). Analysis by four acid digestion with 48 element ICP-MS analysis was conducted on all samples with silver and base metal overlimits re-analyzed by atomic absorption or emission spectrometry. Rock chip samples from outcrop/bedrock are selective by nature and they may not be representative of the mineralization hosted on the project.

The technical content of this news release has been reviewed and approved by Michael Dufresne, M.Sc., P.Geol., P.Geo., a qualified person as defined by National Instrument 43-101.

Benchmark is a Canadian mineral exploration company with its common shares listed for trading on the TSX Venture Exchange in Canada, the OTCQB Venture Market in the United States and the Tradegate Exchange in Europe.  Benchmark is managed by proven resource sector professionals, who have a track record of advancing exploration projects from grassroots scenarios through to production.