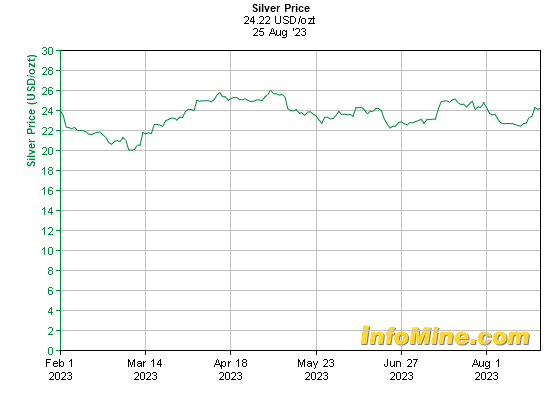 After a rather muted performance in 2018, the prospects look brighter for silver this year.

That is the view of the Silver Institute, which says it expects the silver price to strengthen this year to post an average price of US$16.75/oz, a 7% increase over the 2018 average.

“The volatility in the equity markets is motivating investors to look for alternative options such as precious metals, which will boost silver investment,” it said in a press release.

Based in Washington, D.C., The Silver Institute is a non-profit international association that draws its membership from across the breadth of the silver industry. Established in 1971, the Institute serves as the industry’s voice in raising public understanding of the many uses and values of silver.

Here are some companies that could benefit from a rising silver price:

Prior to the merger Defiance was a silver explorer and developer with a focus on advancing the San Acacio Deposit in the Zacatecas Silver District in central Mexico. The company was aiming to expand San Acacio to the point where it ranks as one of Mexico’s premier high-grade wide vein silver deposits.

ValOro was focused on the 100%-owned Tepal gold/copper project in Michoacan state, Mexico.

A 2017 preliminary economic assessment (PEA) is based on a measured and indicated resource of four million ounces of gold. ValOro continued exploration work on the Tepal Project during 2017 and 2018 and has designed a drill program to investigate the possible expansion of the resource and test new targets.

Kootenay Silver Inc. [KTN-TSXV, KOOYF-OTC] is a Canadian and Mexico-based silver company. It is focused on developing two major silver projects in Mexico, including the La Cigarra Silver Project in Chihuahua and the Promontorio and La Negra silver discovery in Sonora.

The La Negra discovery was made in the fall of 2014 and is one of several new prospects recently identified within a 25 by 15-km mineralized corridor referred to as the Promontorio mineral belt.

La Negra has been compared to Pan American Silver Corp.’s Alamo Dorado Mine, which is located 190 km to the south. Like Alamo Dorado, La Negra is thought to be amenable to a low strip, open pit mining situation.

Tahoe is an Americas-focused precious metals company. It operates the Escobal mine in Guatemala, the La Arena and Shahiundo gold mines in Peru and the Timmins West and Bell Creek gold mines in Canada.

Pan American owns and operates six mines in Mexico, Peru, Argentina and Bolivia. The Peruvian operations include the Huaron and Morococha mines and an exploration stage gold property known as Pico Machay.  Huaron is a 2,300 tonne-per-day underground polymetallic silver mine located in the province of Pasco in the Central Highlands of Peru.

Cerro de Pasco, the nearest city, is a major mining centre and capital of the region with a population of 70,000. The operation is producing silver-rich zinc, lead and copper in concentrates. It produced 3.6 million ounces of silver, or 14% of the company’s targeted production in 2018.

The company’s largest operations, in terms of production are the La Colorado and Dolores mines in Mexico. They produced 7.6 million ounces and 4.1 million ounces of silver last year, respectively.

Pan American recently released its production forecasts for 2019, saying it expects to produce between 26.5 million and 27.5 million ounces of silver the year and between 162,500 ounces and 172,500 ounces of gold.

Pan American’s guidance for 2019, excludes the assets to be acquired under the arrangement with Tahoe.