Blue Sky Uranium Corp. (TSXV: BSK) (FSE: MAL2) (OTC: BKUCF), “Blue Sky” or the “Company”) is pleased to report that it has completed the previously announced drilling program at the Ivana Deposit, within its wholly-owned Amarillo Grande Uranium-Vanadium Project (“AGP“) in Rio Negro Province, Argentina. Assay results will be released over the coming weeks as they are received, compiled, and interpreted.

Nikolaos Cacos, Blue Sky President & CEO commented, “We are very pleased to complete this program, which represents an important next step for advancing the Ivana deposit towards a pre-development phase. Our next plan for drilling will include a return to the Central target, some ten kilometres north of Ivana, as part of our regional program to identify additional resources at Amarillo Grande and build the project into a multi-deposit uranium district.”

As announced on September 28th, 2021, the reverse circulation (“RC“) drill program was designed to test the potential expansion of the Ivana deposit to the west as well as adding holes in areas of lower drill hole density at the margins of, and within, the Ivana deposit to aid in upgrades to the mineral resource estimate that will support advanced engineering studies. The program has concluded with a total of 3,255 metres drilled in 350 holes. This brings the total drilled at the immediate Ivana Deposit area to 10,877 metres in 838 holes (see Figure 1). 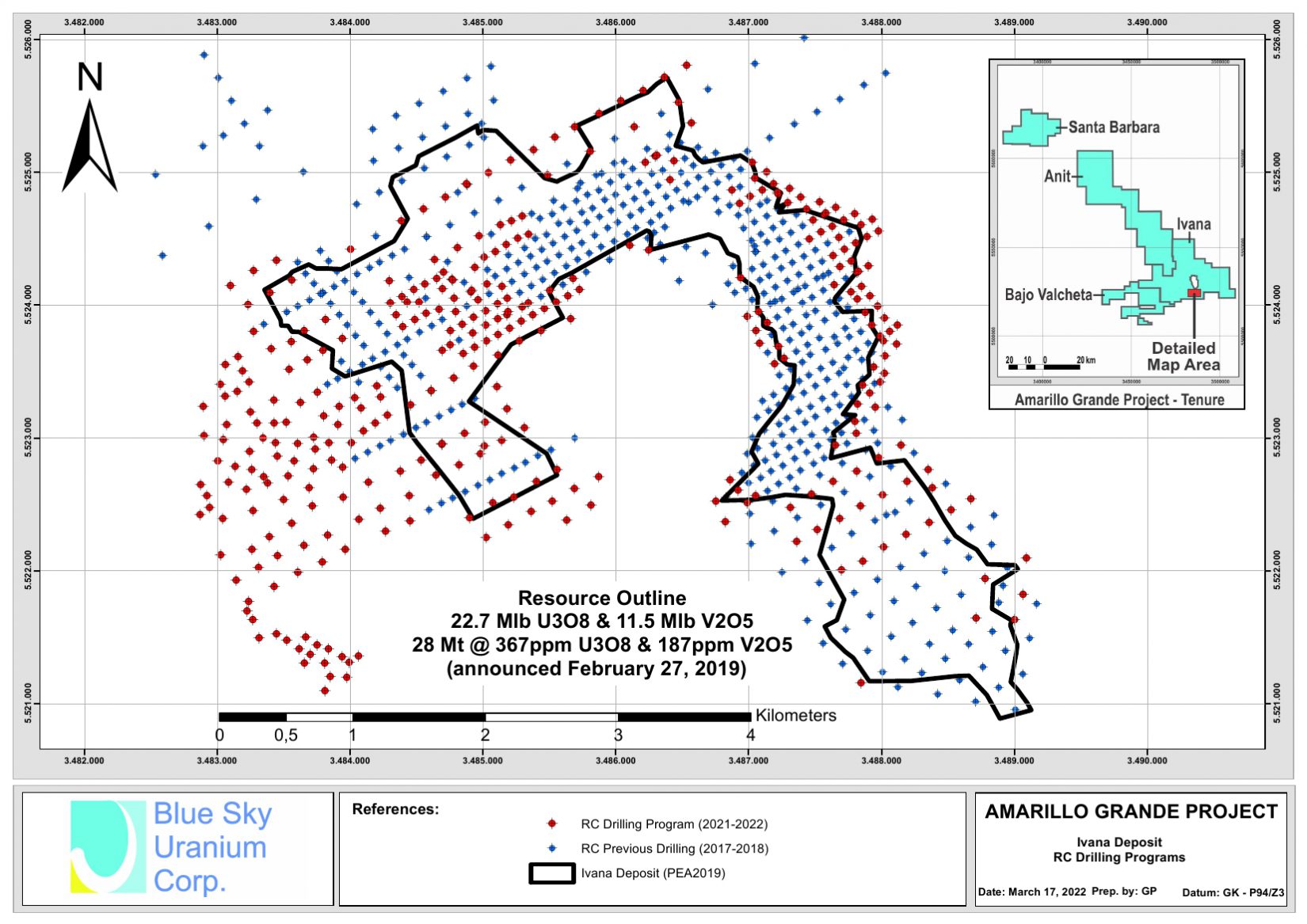 The Company is continuing its exploration drilling program to assess the potential of the Ivana North and Central target areas situated north of the Ivana deposit (see news release dated October 21, 2021). The first stage of drilling at Ivana North portion is complete and identified a geochemical pathfinder footprint similar to the Ivana deposit, which was interpreted to confirm the potential for discovery of a REDOX front related uranium mineralized system in the Ivana North area. Of the first six holes (286 metres) drilled at Ivana Central, two intersected anomalous uranium, including 120 ppm U3O8 over 1 metre in hole AGIC-01. Approximately 1,200 metres of the program remains to be drilled at Ivana Central for completion of the first stage of drilling at this target; an additional 1,500m of follow-up drilling is also planned to vector towards and define targets for new resources.

The design of the Company’s exploration program was undertaken by the Company’s geological staff under the supervision of David Terry, Ph.D., P.Geo. Dr. Terry is a Director of the Company and a Qualified Person as defined in National Instrument 43-101.  The contents of this news release have been reviewed and approved by Dr. Terry.

About the Amarillo Grande Project

The Company’s 100% owned Amarillo Grande Uranium-Vanadium Project in Rio Negro Province, Argentina is a new uranium district controlled by Blue Sky. The Ivana deposit is the cornerstone of the Project and the first part of the district for which both a Mineral Resource Estimate and a Preliminary Economic Assessment have been completed. Mineralization at the Ivana deposit has characteristics of sandstone-type and surficial-type uranium-vanadium deposits. The sandstone-type mineralization is related to a braided fluvial system and indicates the potential for a district-size system. In the surficial-type deposits, mineralization coats loosely consolidated pebbles, and is amenable to leaching and simple upgrading.

The Project includes several other target areas over a regional trend, at or near surface. The area is flat-lying, semi-arid and accessible year-round, with nearby rail, power and port access. The Company’s strategy includes delineating resources at multiple areas and advancing the entire project to prefeasibility level.

For additional details on the project and properties, please see the Company’s website.

Blue Sky Uranium Corp. is a leader in uranium discovery in Argentina. The Company’s objective is to deliver exceptional returns to shareholders by rapidly advancing a portfolio of surficial uranium deposits into low-cost producers, while respecting the environment, the communities, and the cultures in all the areas in which we work. Blue Sky has the exclusive right to properties in two provinces in Argentina. The Company’s flagship Amarillo Grande Project was an in-house discovery of a new district that has the potential to be both a leading domestic supplier of uranium to the growing Argentine market and a new international market supplier. The Company is a member of the Grosso Group, a resource management group that has pioneered exploration in Argentina since 1993.

Forward-looking statements are subject to a number of risks and uncertainties that may cause the actual results of the Company to differ materially from those discussed in the forward-looking statements and, even if such actual results are realized or substantially realized, there can be no assurance that they will have the expected consequences to, or effects on, the Company. Factors that could cause actual results or events to differ materially from current expectations include, among other things: the impact of COVID-19; risks and uncertainties related to the ability to obtain, amend, or maintain licenses, permits, or surface rights; risks associated with technical difficulties in connection with mining activities; and the possibility that future exploration, development or mining results will not be consistent with the Company’s expectations.  Actual results may differ materially from those currently anticipated in such statements. Readers are encouraged to refer to the Company’s public disclosure documents for a more detailed discussion of factors that may impact expected future results. The Company undertakes no obligation to publicly update or revise any forward-looking statements, unless required pursuant to applicable laws. We advise U.S. investors that the SEC’s mining guidelines strictly prohibit information of this type in documents filed with the SEC. U.S. investors are cautioned that mineral deposits on adjacent properties are not indicative of mineral deposits on our properties.